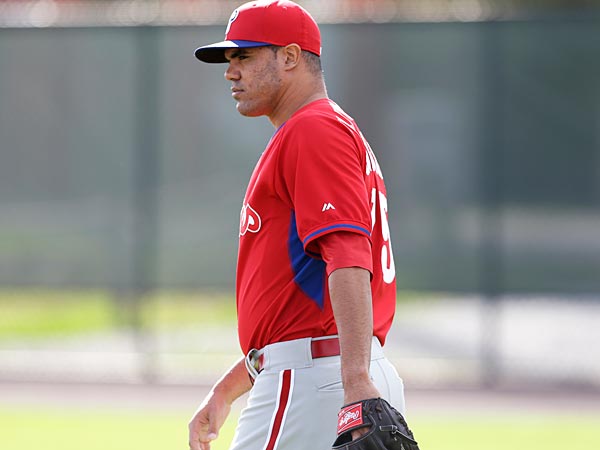 The Philadelphia Phillies lost their Grapefruit League match to the Baltimore Orioles on Friday.

Earlier today, there was a report on CSNPhilly.com that the Phillies may be taking a look at bringing in additional starting pitching help in the form of Erwin Santana, who is still available as a free agent. The team later shot down the report, but they seriously need to reconsider.

If today’s game is any indication, the Phils need to do all they can to make another move to upgrade this rotation as soon as possible.

Cole Hamels’ status is becoming more of a concern with each week. He’s already suffered a setback, and I’d be surprised if we see him before mid-May.

Cliff Lee and A.J. Burnett (who just got rocked today) are the only solid options in the rotation. The Phillies are already looking at having two fifth starters in their rotation with Kyle Kendrick and Roberto Hernandez serve as their third and fourth starters to begin the year. Miguel Alfredo Gonzalez has been a complete disaster, and he hasn’t shown anything to make anyone think he belongs anywhere near a major-league mound.

The idea of having two low-end starters plugged into the three and four holes is bad enough, but when you consider that the fifth starter spot is going to have to be either Gonzalez or a guy like David Buchanon, that’s downright frightening. That’s very bad news for a team that doesn’t have a good enough offense to overcome poor pitching.

Back in 2008-2009, the Phillies could endure subpar pitching because they had an incredible explosive offense that could overcome it. They don’t have that anymore, and with a rotation that could feature three fifth-starters, its going to make it even more difficult for this team to stay competitive.

The Phillies desperately need more help for their rotation, and they’ve got to go out and make another move before the season.

Cole Hamels Experiences Setback, May Not Pitch Until May

keep telling you guys you’re wasting your time with this entire organization the only way this team gets fixed is if the mentality of the owners changes or owners change hands. This whole regime doesn’t have the baseball savy to put a real product together anymore. I stopped watching them long time ago and if fans stop going to games and boycott the owners for insulting our integrity with this debacle for years when they start losing revenue they will make changes . They did it in wade era and they we won ws after they made shit right.This poor excuse for a team just had a game two days ago where they had an extra base hit wow thats pathethic. We will be destroyed by top tier teams this year and humilated by lower bottomfeeders Now cigar will call that negativism I call it reality I have been a phillie fan most of my life baseball first eagles second I lived through the 64 phillie team I saw all the talent and all the slop so I feel my opinion and observation of this whole debacle is right on and been like this since montgomerys took over. Pman talk sum sense into this bunch wish I was on siesta key beach right now!!

The Phillies problem is scouting

Scouting and “Player Develop” has been lacking for a while now
They have done well with some Pitchers,
But Position Pkayers have been poor for a while
Look at Dom Brown who a Defensively still takes poor angles to balls hit, misses cut-offs and Defensively just has never looked comfortable or natural
Out in the OF..
When was last Catcher that Phils have had come up thru their System and
Actuality become an everyday Cathcher in the Big Leagues..
It’s brutal, year after year..this Phillie Core Players (Howard,Utley,Rollins & Ruiz
have not had any young Players pushing them for 3-4-5 Seasons to replace them outside D Ruf at 1B

jake, no the problem is Ruin 2morrow Jr. 1st, & foremost, then the ownership, then scouting! Period, end of story! Who has been the failure, inept GM, since 2008? Enough said! You’re smarter than that.

Taps started playing, as soon as they f^#@ed over Mike Arbuckle, for Ruin 2morrow, & f^#@ed over Chuck Lamar, & made him leave, because Amaro wouldn’t listen to him! F^#@ Amaro, & .300 Monty. This team will eat ass, for the foreseeable future, until both are gone!!

When Amaro’s contract is up, they should consider Charlie Manuel as a GM…His first task would be reviewing the farm & scouting personnel and putting the right people into place or hiring them.

Sandberg is a good enough manager for right now.

I believe Amaro is signed thru 2015
Charlie Manuel is a nice fella but not a GM Type with his lack finances/contract experience..
Best thing the Phil’s can do to turn the ship around is by mid-season when they are 12-15 games out is to fire Amaro
And promote Asst GM Scott Profrock and clean house and strafe every Veteran at the Deadline and get young Players & Prospects in return and rebuild from the ground up like they should have done last Sumner
Then go out and hire a real GM unless Profrock shows that he can handle the Job

No I didn’t Gloony,
Running around and meeting up with some Friends for
The NCAA Tourney B-Ball Games
But I will and appreciate the info..