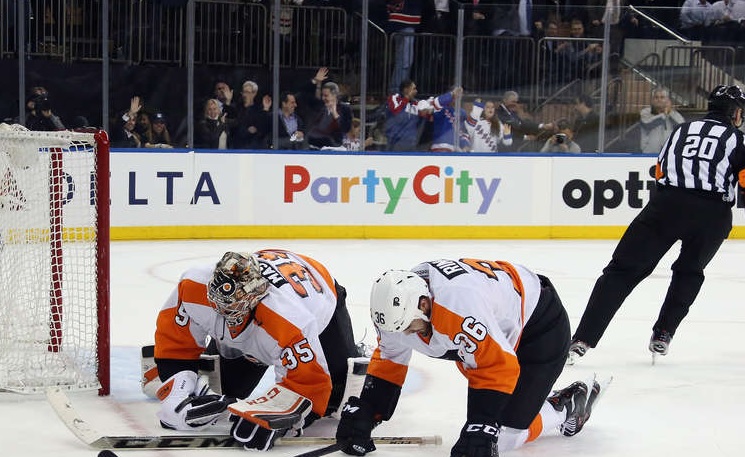 The Philadelphia Flyers staved off elimination from the Stanley Cup Quarterfinals on Tuesday night, providing the home crowd one more opportunity to relish in the possibilities of what this roster could accomplish when they pulled together and played to their strengths.

The 2013-14 NHL season had to end at some point, though, and unsurprisingly the coffers of house money that the team was playing with since late November ran empty at Madison Square Garden on Wednesday night in a frustrating 2-1 Game Seven loss to the New York Rangers.

The Flyers battled well with the Rangers in the first period in terms of puck possession, outshooting them until the final few minutes. The shot count belied the lack of urgency that the team played with, however, and Henrik Lundqvist isn’t a goalie you can rely on to chase from the net every night.

A disastrous second period unraveled the Flyers’ chances, as the team either turned the puck over, failed to clear the puck in the defensive zone, or just plain made awful decisions in the defensive zone on every other shift. Braydon Coburn had settled in as one of the more reliable of Flyers defensemen over the course of the regular season, but his play in this series is going to leave a bitter taste behind for many fans.

The timing of the Andrew MacDonald $30 million extension before the playoffs began is not going to win general manager Paul Holmgren much sympathy either.

Rookie Jason Akeson cut the deficit to one goal early in the third period on a somewhat fluky shot, but only his line with Matt Read and Sean Couturier and the top line of Claude Giroux, Jake Voracek and Michael Raffl really produced any offense during the game. As much fun as it is to cheer on the “Wayne Train,” Simmonds’ line with Scott Hartnell and Brayden Schenn was largely ineffective.

The fourth line wasn’t terrible, but Zac Rinaldo further cemented his reputation as dead weight for an unnecessary penalty in the first period and for missed coverage on the second Rangers goal. In his defense, Coburn and MacDonald were largely responsible for the poor decision-making that led to a turnover in the first place, but if the team is down a goal in an elimination game, you have to contribute something. If you can’t provide offense and aren’t defensively responsible, “character guy” only goes so far.

Game Seven was effectively a microcosm for the Flyers’ season. The offense was invisible for stretches of the game, the defense made unforgivable mistakes on what should be simple plays, and goaltender Steve Mason played out of his mind.

Mason was the star of this series, even with the Flyers’ loss. His performance between the pipes was nothing short of brilliance, and it’s a shame that the Flyers wasted it when you consider how volatile goaltending as a position can be in the long run. Mason silenced his critics (myself included) over the course of the regular season, and having this series played out on a bigger stage has finally brought to the national media’s attention that Mason isn’t the same punchline you can recycle every time you want to lazily draw conclusions about the Flyers.

The season that began with all the volatility that is associated with a head coach being fired three games in ended with discussions of a Jack Adams nomination for head coach Craig Berube, thrown under the bus by members of the Philadelphia media during his promotion press conference in October because the Flyers haven’t won the Stanley Cup since 1976.

In spite of what he accomplished during the regular season, though, Berube and the rest of the Flyers organization will have to look back at this series and Game Seven and hopefully learn from some of their coaching decisions.

For one thing, never question playing Erik Gustafsson over a 39 year-old semi-retired defenseman again. He isn’t the holy savior of the blue line, but he is just as reliable in his own end as some of the guys earning (or soon to be earning) five times as much.

Akeson is perhaps the biggest surprise of this series- not in the sense of what he brings to the table, but that he was even invited to the show at all. The Flyers waited until the playoffs essentially to see what he could do, and that is provide playmaking and offensive instincts. He may not be the best fit for the Flyers in the top six based on how he was muscled off the puck somewhat regularly, but he has the talent and intelligence to stick at the NHL level. It’s all about finding the role that fits best.

The Rangers were the better team during the regular season and this series. That the Flyers forced a Game Seven speaks a lot to the talent that is present on this team, but there are still holes to address before this team can bring back the Stanley Cup.

Game Seven, much like this season, left fans frustrated early and hopeful by the end. All one can hope is that the players that remain for next season after the inevitable offseason bloodletting don’t leave Madison Square Garden remotely satisfied.

Also, that the Pittsburgh Penguins and New York Rangers succumb to a massive sinkhole below the CONSOL Energy Center. Pick your favorite Western Conference team from here on out- it doesn’t matter which.