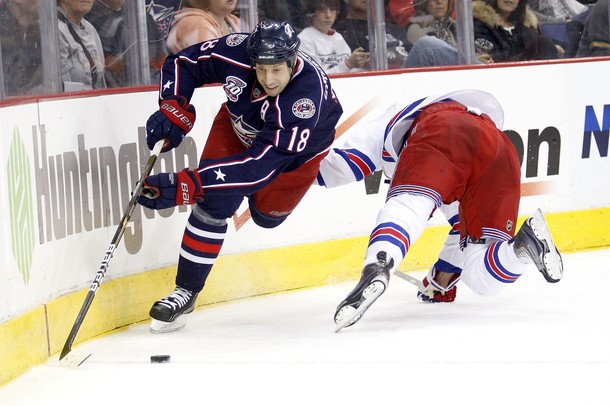 “It’s deja vu all over again.”

June 23, 2014- The Philadelphia Flyers have announced that they have traded veteran forward Scott Hartnell to the Columbus Blue Jackets for centerman R.J. Umberger and a fourth round pick in the 2015 NHL Entry Draft.

New general manager Ron Hextall has made the first big transaction of his tenure, with mixed reactions from many fans and media members alike.

Hartnell, 32, has had a fair share of up-and-down seasons over his seven seasons in Philadelphia. The top line left winger potted 20 goals and 52 points this season while playing with Claude Giroux and Jake Voracek.

The largest benefit of the move is that Hartnell has five years remaining on his current contract, worth $4.75 million per season, and while he may still have several more productive NHL seasons, it is increasingly unlikely that he repeats as a 25-goal scorer as the contract continues.

On the other hand, one of the offseason topics of discussion has been upgrading the offense with another top six left wing. Regardless of your opinions on Hartnell, the team currently does not have anyone set to replace him unless the organization feels that Tye McGinn is ready to handle his minutes.

Additionally, the acquisition of Umberger doesn’t make much sense in the short-term.

Umberger, 32, has a similarly bloated contract in comparison to Hartnell’s, albeit a shorter one- three years, $4.6 million per year. The Flyers will shave two years of cap space off the books, but Umberger has been a steeper decline than Hartnell already. This past season, he scored 18 goals and 34 points.

As mentioned earlier, Umberger is also a centerman. Unless he moves to left wing, it likely means another trade or two is coming. Hextall has said repeatedly that his #1 priority is re-signing Brayden Schenn, and yet there have been no rumors of any kind as far as how those discussions have progressed. Schenn could be moved to wing, again, but this move raises a lot of questions.

Umberger played for the Philadelphia Phantoms during the 2004-05 season and was a member of the Flyers from 2005-2008. Umberger is remembered best for his performances during the 2008 Stanley Cup playoffs.

Personally, I won’t miss Hartnell…I always thought he was incredibly unreliable…he’d just lose his focus and disappear for long stretches at terrible times, including the playoffs. This past post-season, he was a complete non-factor….good time to move on from him.

Unfortunately, as Josh states, its another move to bring in yet another centerman. I expect them to part ways with Lecavalier one way or other, but even without him they still have too many centers and not enough wings…

Where is the plan? What kind of team are they trying to be ? The run their organization like they were trading hockey cards. New GM same old stuff.

Lateral move with everything factored in. Short term Colmbus might get offence edge but long term Flyers get out of the long term contract. Hartnel is definitely going to need a setup man, not sure what cbj has comparable to giroux…

It should be noted that, based on what has been made available today from Hextall and Hartnell, the Flyers organization basically told him they were “done” with him. Hartnell has a no-move-clause, however, so any move would require his approval. It’s unknown what options were given to him, but it’s certainly possible that he chose Columbus and all they were willing to part with was Umberger.

That is to say, that’s what happens when you include a no-move-clause with a player’s contract.

Lew- I just added a post for the Schenn re-signing. As for Hartnell’s set-up man, that will likely be Ryan Johansen. Expect a Hartnell-Johansen-Horton top line from CBJ.

Yeah that will be a tough line to play against. Johansen is no G but he is definitely skilled.

Pathetic. This team loves to trade muckers for other muckers (as long as they are former Flyers). Who in their right mind signs a mediocre player like Hartnell to a long-ass contract at $4.75 million AND gives him a no-trade clause? Why does this team always put former muscle-heads like Holmgren and Hextall and Berube into positions where thinkers are required? Ed Snider has been a bad owner for a long time.

He is not a better center than any in the current flyers lineup and he is a worse winger than they guy they traded to get him.

Did I hear correctly that Umberger was a healthy scratch for Columbus during the Playoffs this year?

That is correct. He was all but bought out. Which is what makes this trade look gangbusters for Columbus and questionable for Philadelphia. Hextall spoke take with reporters from CSN and it seemed the cap savings 3 years down the line were enough to justify the move in his mind…

He played like he was scratched, but he played. 1 point in 5 games.

I read that Columbus was seriously considering buying out his salary before they traded him.

Should make a run at Sharp to play LW for Giroux. 5.9 cap hit until for next 3 years. Would Chicago be interested in Vinny in a package if they can’t get Spezza or Kesler?

That is a former flyer I would take back….revisit that thought in 5 years when he is on his decline

Sharp is rumored as a potential trade piece for Ryan Kesler. It would make sense for Chicago, who need a true 2nd line center. I doubt they would make a run at Lecavalier.

I know Josh, but I can dream.