Does The Eagles’ Chip Kelly Have The Formula For A Super Bowl Title? 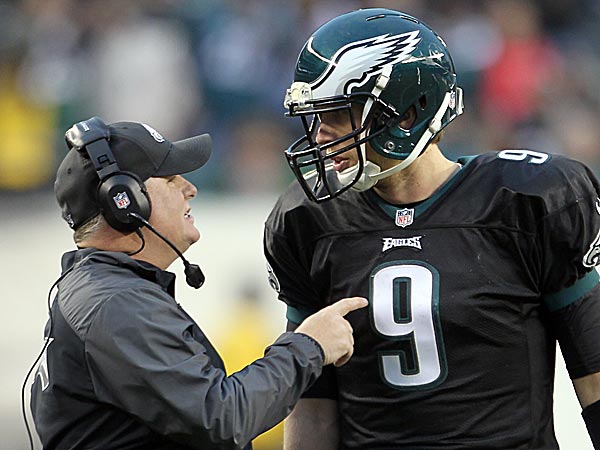 Chip Kelly has proven that he is a brilliant NFL offensive game planner and play caller, but we still don’t know if has the formula for making the Eagles a Super Bowl championship team.

Looking back at Kelly’s decision to get rid of Eagles wide receiver DeSean Jackson because Jackson didn’t buy into his “Team-first Culture”, he’s probably going to be proven right.  That didn’t help Kelly this past season, but he’s confident that it will help him in the future as he builds a “Team-first Culture” at the Nova Care Complex.  I think in the long run he will be right.

It’s been proven to be a good formula for making your team a perennial playoff team.  I think missing the speed of Jackson hurt the team this past year, but I think Kelly felt that getting rid of a selfish, “Me-first” player will help the Eagles organization in the future.  Still, they have to replace his talent.  Speedy rookie Josh Huff wasn’t able to replace Jackson as a deep threat this past year and it hurt the Eagles offense.

According to Kelly, a “Team-first Culture” is the key to winning consistently when it comes to NFL football.  Meaning the key to building a winning NFL team is developing a dominant “team-first mindset” amongst your entire organization and making sure everybody gets in line with it.  I think he’s right.  Look at the winning programs around the NFL and you will see the Patriots, Steelers, Ravens and now the Seahawks.  They all have a “Team-first culture” around the organization.

You can see that “Team-first Culture” is the mindset of Kelly’s buddy Bill Belichick. up in New England.  Belichick has used the “Team-first Culture” to be a consistent playoff team for more than a decade because they have a very, disciplined and intelligent team that doesn’t beat itself.  That “Team-first Culture” helps you win during the regular season, especially when you’re in the worst division in football.  I still believe Belichick is overrated because he’s been able to beat up on the Bills, Jets and Dolphins for all this time.  Those teams have been perennial basement dwellers for decades.

I do agree that “Team-first Culture”  will likely make you a winner in the regular season, but it won’t necessarily make you a champion.  We’ve seen that in recent Eagles history.  You need something else to be a Super Bowl Champion.

Andy Reid had a winning “Team-first Culture”  in Philadelphia for nearly a decade and it made the Eagles consistent winners.  They also benefitted from playing against bad Cowboys, Redskins and Giants teams during that stretch. Still, those Andy Reid teams weren’t able to take their game to another level during the playoff games, so they never won a championship.

Quarterback Donovan McNabb didn’t take his game to another level in those big games and the Eagles defense didn’t play well in those big games, either.  They let the Brad Johnson-led Tampa Bay Buccaneers and the Carolina Panthers beat them here in Philadelphia at Veterans Stadium with the Super Bowl in sight.

Super Bowl title teams usually have a Franchise quarterback like, Tom Brady, who is a great decision-maker, as well as a very accurate passer, who takes his game to another level during big games.  They also have a good defense that is playing well.  “Team-first Culture” is great and will help you get there, but to win a Super Bowl you need that Franchise quarterback and defense taking their game to another level.  As good as Brady has been, he hasn’t be able to win another title for about a decade because they haven’t had the quality defense.

I do agree that the Eagles made a mistake a few years ago when they went out and signed the “Dream Team of Free Agents”; Nmandi Asomugha, Dominique Cromartie, Vince Young and the rest of that crew because many of those guys came from losing teams.  They ruined the “Team first Culture”, which Reid had developed around here.  If you don’t beat yourself in the NFL, you have a good chance of making the playoffs.  Discipline wins.  Mistakes get you beat in the NFL and we saw that this year by the Eagles.

You have to be careful about which players you pay the big money to on your football team because they can become role models for the rest of the team.  Kelly thought this was the case with Jackson, but the Eagles have so many character guys that Jackson wasn’t a leader on the team, but he was a producer.  You don’t need everybody on the team to buy into the system perfectly.  I believe if Jackson were on the team this past year, they would have been in the playoffs, but they weren’t going to win a Championship.  Maybe getting rid of Jackson early will help the Eagles build that “Team-first Culture” sooner.

A Super Bowl championship NFL team almost always has the following two ingredients.  1. They have a Franchise quarterback, who is a great decision-maker, very accurate passer and a clutch performer.  2. They have a very good defense that’s playing well at the time.

The Patriots won their championships because they had a very good defense, which was playing well and they had Franchise quarterback ,Tom Brady, who is a brilliant decision-maker, as well as a very accurate passer and he’s a clutch performer.  If you have that type of quarterback and that type of defense you have what it takes to be a Super Bowl Champion.

Last year Seattle didn’t have the Franchise quarterback in Russell Wilson, but their defense was so dominant that it carried them to the championship.  They might be able to do it again.   Baltimore won a Super Bowl title with the “Dominant defense formula” and Trent Dilfer was their quarterback.   History has shown us that you can have a defense that is so dominant, that it doesn’t matter whether you have the Franchise quarterback.

We haven’t seen a Franchise quarterback win a title without a good defense.  History has show us that you must have a good defense that is playing well at the time, if you want to win a title.

Future Hall of Famer Peyton Manning has only won one Super Bowl because throughout his career, he has played his best football during the regular season, but in the clutch with everything on the line, he does’t take his game to another level.  Borderline Franchise quarterbacks like Joe Flacco and Eli Manning have been able to take their game to another level  in the playoffs and Super Bowls.  This is unusual and not the norm.  Normally, if a quarterback hasn’t shown greatness in the regular season, he doesn’t show it in the playoffs and Super Bowl.

Peyton Manning is one of kind.  He’s a Franchise quarterback during the regular season, but average in the post season.  Incidentally, the Colt defense had a lot to do with them winning that Super Bowl because Manning played okay in that Super Bowl and shouldn’t have been MVP.

In the playoffs, Flacco and Eli have been very good decision-makers with the football.  They’ve thrown the ball very accurately and they have taken their game to a much higher level during the big games.  Their situations have been somewhat unusual because in the regular season, they haven’t consistently played the quarterback position on that level.

We’ve seen Franchise quarterbacks like Steve Young, Aaron Rodgers, Drew Brees and Ben Roethlisberger play at a great level at the quarterback position and lead their teams to victory, but they also had good defenses that played well.

In the 1980’s, Bill Walsh’s West Coast Offense scheme orchestrated by Joe Montana led the Niners to 4 Super Bowl titles.  Montana took his game to another level in the playoffs, but the Niners also always had good defenses led by Ronnie Lott.  There’s no doubt that 49ers had a “Team-first Culture”, which helped them win consistently.

It’s been a while since we’ve seen a team, which is led by their offense, win with a dominant running game.  The Denver Broncos of 1998 and 1999 are the last team to come into the Super Bowl and pound the other team into submission with a running game.  Terrell Davis led the way for Denver despite John Elway being the Broncos quarterback.  The Redskins did that three times but that was years ago in the 80’s and early 90’s.  In the 1970’s the Steelers and the Dolphins each ran their way to Super Bowl titles.

Nowadays, the passing game is the key to winning a Super Bowl title, so the play of the quarterback is more important than it was in the past.  When you have third and five-plus, you can’t run the ball consistently and get the first down against a good NFL defense.  You must have a quarterback, who can make good decisions with the football and throw the ball accurately.  He can’t turn the ball over if you want to win.

As for Chip Kelly and the Eagles, he may be able to put together enough talent along with the “Team-first culture” that will get the Eagles in the playoffs, but that will not win the Eagles a championship.  The key to Eagles title hopes will rest in the hands of his quarterback, who will likely be Nick Foles.

Chances are he won’t be able to do that, but we still don’t know.  Nearly all of the Super Bowl Championship quarterbacks are Franchise quarterbacks.  Look at the history.  The only way you win a title without a Franchise quarterback is when you have a historic defense like the 1985 Bears, 2000 Ravens, or 2013 Seahawks.  Notice that those defenses come around about every 14 or 15 years.  The Eagles defense is no where near being in the league of those defenses.

Can the Eagles put together a defense that will play well in the post-season?   You must be able to keep an opponent”s running game under control.  The Eagles defense must have a good pass rush and a good secondary.  They would have had no chance trying to stop the passing games of the Packers and Cowboys in this year’s playoffs.

So right now, we know that they don’t have the historically dominant defense for a championship team.  We can only hope that Foles is a Franchise quarterback.

Bottomline I don’t see a Super Bowl title in the near future, unless……

The NFC and AFC Championship Games