In 2010, Eagles Rated Sam Bradford On Par With Peyton Manning 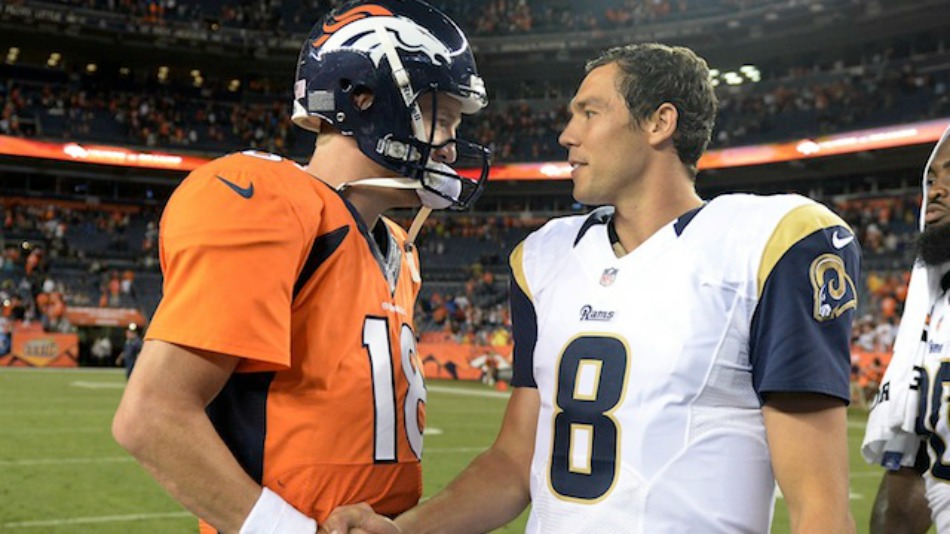 The Eagles season and Chip Kelly’s future rest in the play of one player, quarterback Sam Bradford.

According to Eagles owner Jeffrey Lurie, the team had an amazing evaluation of Bradford in 2010 when he was coming out of Oklahoma.

“When he was scouted out of college, we thought — and this goes back to Andy — we thought he was the best young quarterback we’d seen in a long, long time,” Lurie said Tuesday. “Probably since Peyton Manning coming out of college. Rookie of the year his first year. Outstanding. Pat Shurmur had him as an offensive coordinator, reconfirmed everything we’d heard about him in the draft process. Extraordinary competitor. Incredibly accurate and needs to stay healthy.”

“Love him.  Love him,” Weinke told the St. Louis Post-Dispatch when asked about Bradford. “Historically, I look back at every guy that I’ve evaluated coming out of college. A few years ago when Andrew Luck came out they said who would you compare him to? And I said the closest I would see is Sam Bradford. And I say that without knowing Sam. I’d never met Sam until this process. Looking at his physical skill set. And then obviously talking to people and understanding his mental capacity and his football IQ, and all those different things. Sam by far has had the best pro day out of any guy I’ve ever evaluated from a physical standpoint. And he was coming off an injury at that point in time. So when you look at a guy who’s a pure passer of the football from a physical standpoint, he’s as good as anybody I’ve ever evaluated.”

I’ve never seen a quarterback with so little to show in five years of his career, have such glowing evaluations. I hope they prove out to be legitimate.

Lurie stressed the importance of the franchise quarterback in building a championship team.

“There was an opportunity to do an upside gamble with an outstanding young quarterback who you hope can become healthier throughout his career,” Lurie said. “It is so hard to get a franchise quarterback, as you know. It sets the ceiling on what you have as a team, and do you want to take upside gambles or not? You’ve got to make that decision.”

Kelly was just as high on him as the Eagles had been in 2010.

“When you look at Sam, it’s his overall accuracy that I think impresses everybody when you watch him play,” Kelly said.

“Just looking at where we are and what we need to do, we’ve got guys open and we didn’t put the ball on them in certain situations,” Kelly said.

Kelly has said before that he values two abilities in a quarterback; accuracy and decision-making.  Bradford has been rated very high in both of those categories.

“These are not flippant decisions of a head coach,” Lurie said. “These are very studied decisions. He watched Sam Bradford hundreds of times. He talked to every coach he ever had. This is well-researched. It wouldn’t satisfy me if it wasn’t.”

Still there is one question that will dominate the upcoming season for Chip Kelly and the Eagles.

Kelly pointed out that it wasn’t unusual for a great quarterback to get injured and miss a season.

“I think Sam has an outstanding skill set as a quarterback. The only knock on Sam is that he got hurt. If he hadn’t gotten hurt I don’t believe he would have ever been in a situation where he was up for trade. Sam’s injury is an ACL and he’s rehabbing very hard from it. It’s not something where you can say he’s brittle or this is his situation. When you look at all the great quarterbacks,” Kelly told NFL Media’s Steve Wyche, “Peyton Manning has missed a year, Tom Brady has missed a year, Drew Brees has missed a year. Again, we felt like to get a player of Sam’s caliber, it wouldn’t have happened unless he was injured.”

That sounds great but, Bradford has an injury history much more extensive than any of the other forementioned quarterbacks.  Yes, all those great quarterbacks missed a season, but Bradford missed his final season at Oklahoma due to a shoulder injury, then missed a couple of NFL seasons due to ACL tears.

Bradford has missed three of his last five seasons.  Maybe his body is just not able to take the pounding that goes on in NFL.  He is very slim. He’s not a big physical quarterback.

He could be the greatest quarterback who every played the game, but he may be unable to stay healthy.  If that is the case, the decision to bring Bradford here in place of Nick Foles could blow up in Chip Kelly’s face.  We’ll have to wait and see what happened.

Someone may want to tell Chip Kelly & Jeff Lurie that’s it 2015…
Jeff Fisher and Howie Roseman must be laughing their asses off..

Peyton, Aaron, breeze etc would not have Bradford’s pitiful win percentage. All u weapons guys are full of shit. A QB of elite status raises the players around him…. See tom Brady and his revolving door of mediocre receivers …. If you are a fan stoked in Bradford … You have more faith than me

HC, I do have more faith! Bradford is a way better QB than sanchez n if Chip can turn a 55% completion QB like him into a 64% QB then I can’t imagine what he’s gonna do with Bradford, you guys can talk all that hurt stuff all you want but from the results I’m seeing with the other players here like Maclin with this sports science I’m feeling good about it, when you see how bad Foles looks this year not playing for Chip your gonna realize how it’s all about Chip even more.

If Bradford is hurt again this year or not available, it will not matter if he is better than Sanchez or not. Sanchez will be playing. As far as sports science, the Eagles had a ton of injuries last year so smoothies and extra sleep is not going to guarantee Bradford’s knees remain intact (I know smoothies and sleep are not the crux of sports science). I find it funny that Chip said he is concerned about Mychal Kendricks staying healthy, but also believes Sam Bradford is not brittle or injury prone. That knee slapper had me laughing my ass off!!!

Eagle, It’s way more then smoothies n sleeping, this guy brought in a guy from the navy n a medical staff that runs a program that gets these guys back on the field better than ever, Murrary n Mathews where raving about how much their looking forward to it at their press conferences, what was funny was they but brought it up but didn’t talk to each other other than saying hi when they first saw each other, goes to show you what players from other teams are saying about it, it’s real n it works, Maclin n Kelce are proven examples,,as for kendricks? No one said the program is gonna heal u in record time but it’s definitely gonna have a better affect on you when u get back on the field, Kendricks sure didn’t look rusty when he came back, he played like he was never out, that’s the results from the sports science

Lol, Andrew, I am aware of the navy SEAL training techniques used for fitness and health the former SEAL has implemented into the program. I did say that the smoothies and sleep are not the crux of the program….I was being facetious.

Chuck bednarik I can only assume never drank a smoothie. He led with his head, used it as a weapon and missed 4 games in like 14 years. I believe I chr drank a smoothie he may have only missed 3 games.

Let be clear…its a GAMBLE…and Sam Bradford might not work…he may get hurt. Then you have to get another QB….but that’s the situation we were in before you traded for Bradford….we needed a starting QB!
You have to gamble for a chance to be good…might as well take the shot with a QB that has talent…then sticking with one that doesn’t have talent.
Its that simple!

a quote -However, the Buccaneers posted 2–14 records in each of Young’s two seasons with them, and Young’s record as starter was 3–16. In his 19 games, he threw for only 11 touchdowns with 21 interceptions while completing fewer than 55% of his passes. Although his time in Tampa Bay was miserable, San Francisco 49ers coach Bill Walsh was impressed by Young’s natural abilities and felt that his problems were due to the struggling Bucs organization.

bottom line is I don’t know many professional football players that have NOT gotten hurt or who have NOT had a surgery, and the question of ‘Can we keep our QB healthy’ is probably a question every single team tries to answer –

has anyone looked at who the starting O Line of the Rams were the years he got hurt – probably did not have a pro bowl center – best blocking TE in the NFL – 1st rd up and coming RT – pro bowl caliber LG and the best OL in the NFL in Peters on that line – probably did not have the NFL rushing leader and a 2 other pro bowl RBs (ok Sproles was for returns but he can scoot).. If Chipper listens to me he will draft a stud RG in the 1st round –

probably should go a long way to keeping him helathy

LMMFBO!!!!!!! And it’s a wonder why this team is doomed under this front office turmoil & ineptness!