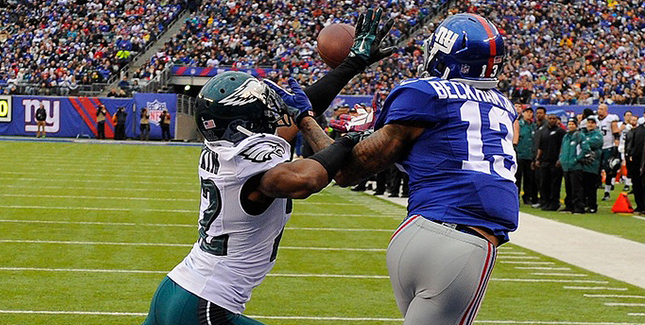 Eagles nickel back Brandon Boykin, who is considered one of the best if not the best slot cover defensive back in the NFL, is tired of talking about why he isn’t starting outside at cornerback.  There used to be an understanding system in the secondary where the third best cornerback would be the nickel guy and once he proved he was one of the top two cornerbacks on the team, he would be moved outside to a starting position

He knows one of the reasons he’s not starting at one of the outside cornerback positions is his height, 5’9″.  Do you think Boykin and fellow undersized Eagles defensive player, Mychal Kendricks, talked a few times during off season?  They both have been good players for the Birds, yet because of their height their names have been apart of trade rumors.

Chip Kelly has made it clear that he wants his cornerbacks to be six foot or above.  Boykin still wants a shot at the job.

“Here they have certain requirements,” he said. “Be honest. Call it what it is. Maybe they want a taller guy to be outside, and that’s what their preference is, just to start the standard. I’m sure [there are] some exceptions — there’s a reason why I’m still here.”

The diminutive cornerback even went so far as to let Chip Kelly know that he’s going to hold him accountable for what he said he would do, which is give him a chance to be a starter at one of the outside cornerback positions.

“We had a meeting,” Boykin said. “I talked to [Kelly]. I asked him what are the expectations for me. Everybody knows it’s the last year of my contract, and he said, ‘We’re looking for you to compete for the outside spot.’

“So that’s what he said. He’s the coach. He’s a man of his word, then I’m going to hold him accountable to that, like he does us.

“And I’m going to go out there and ball and do what I’m supposed to do, and once camp hits we’ll see who outperforms whoever, and I guess you guys can worry about the rest.”

Boykin isn’t thrilled about his situation, but he’s not going to let it affect the way he plays.

“I’m just going to continue to be the best slot [corner] in the NFL. I feel like I am. I feel like my statistics show that, and that’s what I’m going to focus on.”

Very well said. And he does deserve a shot at the starting CB position. Who cares if he’s 5’9. I’d much rather have someone who is 5’9 that can ball, rather than someone who stands 6’0 or taller who sucks in coverage.

Another Final Season of a Disgruntled Eagle Player in Brandon Boykin..
He will play the Season Out and keep his mouth shut for he has his next Contract to Play for… I expect him to head South and sign with a Team like the Falcons,Titans, TB Bucs, Panthers, Saints, etc…

Boykin has been a good player. At 5′ 9″ he has proved that he can play in the NFL, but with taller and taller receivers coming into the league, I have to agree with Kelly’s approach in looking for taller outside corners to combat the Dez Bryant’s and Kelvin Benjamin types that are becoming more and more the norm. Boykin has shown that he has the speed, cover skills and jumping ability to make up for a lack of height, but that does not mean that we should intentionally create a mismatch for our team because we are trying to be politically correct. Give him a chance to compete for the position, but in the end do what is best for the TEAM. In the end I think we will be a better player with Boykin inside, but we will see how it works out during camp.

Most Teams Slot CB’s remain as Slot Backs in the Specialized NFL and has been that way for the last 5-10 Years..
Remember Juselio Hanson for the Ragles was employed in the same way..
It’s a Postion where a young CB can get on the field and potentially become an outside CB, but most of the Time, they become SLot Receivers to cover SLot Recievers and Backs out of the backfield which a Smaller Defender can handle.. So many of Todays Outside WR’s are 6-2, 6-4 and bigger where a 5-10′ or smaller DB is going to struggle covering.. its the way it is..

It’s gonna funny next season when Boykin leaves and turns into a all pro and maxwell is just avg at best….

They Play 2 Different Positions … Slot CB is not like Playing the outside CB
It’s difficult for a Slot CB to make Pro Bowl since they are only on the field
50%-60%, unless they make a lot of Int’s