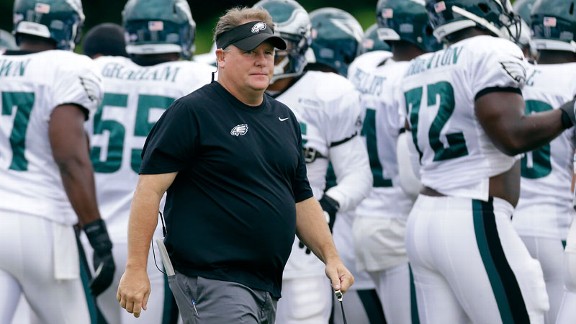 Winning the NFC East is a must in year three of the Chip Kelly era. 2014 ended in disappointing fashion, which led to a roster shakeup rarely seen by a team over the course of a single off-season.

Players were acquired via trade or signed in free, talented but also with injury history. Chip is gambling, hoping that the cards turn over in his favor. A game within a game, how the mind works for Chip, drawing the attention of local and national media with his unorthodox approach.

He may warrant intrigue; but at some point winning has to be the result or the entertainment value decreases in worth.

I look at all of the changes the other three NFC East teams made in the off-season. I compare those to the overhaul the Eagles went through, factoring in the concept that it could be either Bradford or Sanchez starting the majority of games this season.

My initial thoughts; the Cowboys are the team the Eagles will chase, but don’t count out the Giants.

Minus the loss of Murray at running back, the Cowboys arguably came away with three first round picks from the 2015 draft. They “improved” their offensive line which was already one of the best units in the NFL. They improved in all three phases of their defense. A running back by committee will likely be their approach, and they still have Dez Bryant, a challenge awaiting the new Eagles secondary. I like Dallas finishing with nine wins on the season, good for third place in the division.

The Giants have one of the best young wide receivers in the game, added Vereen to their depth at running back and the change in offensive philosophy had Eli Manning playing well after an initial slow start to the season. The Giants have won two Super Bowls with their current head coach, and I expect a bounce back year after a forgettable 2014. I like the Giants finishing with ten wins this season, second place in the division, and it will come down to some tie breakers to see if they get one of the wildcard spots.

The Redskins focused on getting “nastier” in the trenches, although their quarterback situation limits what the team can do. Even with the upgrades the team made in free agency and the draft, I feel there is some disconnect between quarterback and coach and a lack of talent ay several positions. I’ll bump their win total up to seven games this season, finishing in last place in the NFC East.

As for the Eagles, I’m giving them eleven wins for the season which earns them a second divisional title under Chip Kelly. Unlike Maxwell, a trip to the Super Bowl is something I can’t picture; we are still very far away from matching the level of the Packers and Seahawks.

Kills me to admit it but barring injury the Cowboys are a 10+ win team. Giants will be improved but will lose the battle up front on offense and defense and will likely go 8-8; maybe 9-7.

I agree a divisional title is the goal, but I think making the playoffs by any means remains the #1 goal for this team.

There is a “STAR” on the front door of my next door neighbor, I hear about the Cowboys year around.

Although the o-line in Dallas is one of the best if not the best in the game, I do believe not “upgrading” the RB position will hurt the much improved Romo the NFL world saw in 2014.

I think defenses are going to focus on slowing down Dez and allow T.Williams, Beasly and the other WR’s to beat 1:1 coverage. I feel one of the biggest changes with Dallas will be with their defense. They could barely get a pass rush going last year, once Hardy is back, between him, rookie Gregory and second year man Lawrence, the defense should look much better.

The Giants to me are “due” for one of those seasons where they play above projections/expectations.

I think “schedule” wise, it looks easier on paper versus what we saw in 2014, however I think every team improved in the NFC East.

Heard this morning that we are 100 days until the NFL season opener. Feels far away but between the 76ers draft and fantasy football prep, it should be here soon.

I haven’t, cowboys are going to try and use him more on the outside this year and try to prevent another injury. Byron jones will also bring some athleticism to secondary as Claiborne can’t stay healthy and hasn’t lived up to the level in which Dallas traded up to draft him.

DC R Marinelli makes the most of his Defense and their Front 4 Collectively will apply Pressure to the QB which is what his Defense is all about and as long as their Safeties stay healthy and hold up, they are adequate to keep them in Ballgames for their Offense

After OT Jason Smith was a flop for the Rams, I’m fine with going OL, but I’m going to request one from a different school.

How is Spencer Drango’s back going to hold up this upcoming season? There will be a lot more better talent on the board at 17 then Drango. Let’s see what happens with the QB situation first.

Didn’t Danny Watkins play at Baylor Also…. Good Grief…
Chip Kelly said he is not concerned with Drango’s Back and that his Sports Science Team will get him up to speed in no time, besides, Chip says
he likes the name Spencer Drango and reminds him of some old Spencer Tracy/Katherine Hepburn Movie of Years gone by…

so far on june 3 2015 fraudman has 3 predicted names for a first round pick– by next may there will at least 100 guesses for that first pick– if one of the 100 picks he will brag about getting it right…. he won’t mention the other 99…

Jaylen Ramsey is a flat out stud…

Big…you’re right about that, Ramsey is definitely top 15 talent wise.