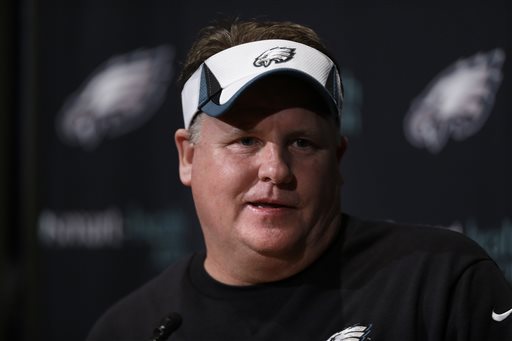 1. Chip Kelly– The man has certainly made his mark in Philadelphia. Some believe that what he is doing will result in a Super Bowl title; others see a man with Pro-Bowl talent and attempting to run a college team at the professional level. The mystery of who he is on and off the football field, the intrigue with how this era in Eagles history will turn out, there is nobody who “comes close” to the dethroning Chip from the top of this list.

2. Sam Hinkie-How can a second straight “non-athlete” begin this top 10 when there are four major sports markets in Philadelphia? Hinkie has a plan, nobody really knows if it’s going to work or not, but the majority of people see the positive in it.

3. Cole Hamels– Will this be the year that he gets traded? Hamels will one day have his own plaque at Citizens Bank Park, but if he wants to be in a position to win another World Series it’s going to be with another ball club. The guy is still an elite pitcher and gives Phillies fans a reason to watch or go to a game.

4. Sam Bradford-Still recovering from surgery, never played a snap for the Eagles, but it’s critical that he is the starting quarterback for the 2015 season and beyond. If he can stay healthy and regain his confidence, Bradford will ultimately become the most important player needed by the head coach to make the Super Bowl push.

5. Mark Sanchez-Even though the hope in Philadelphia is Sanchez remains a back-up, the truth of the matter is he could play a lot more then what “most” fans would like. One must hope that year two in the Chip Kelly offense, another year removed from the shoulder rehab and the roster additions made by the Eagles is enough to hide his average arm strength and turnover vulnerability.

6. Joel Embiid-Twitter messages and YouTube clips have been entertaining. The potential of the 2014 3rd overall selection of the NBA Draft and comparisons of Olajuwon have Sixers fans eager for the summer league to begin. If he lives up to the hype, the 76ers have an important piece of the puzzle for years to come.

7. Claude Giroux-The “Captain” of the Flyers is still one of the best young players in the league. The change in head coach could be the spark needed for a more consistent Giroux on a game by game basis.

8. Nerlens Noel– The hairstyle by itself is enough to build a strong following, but his play particulary in the second half the season was very entertaining. Noel is not going to be known for his shooting form, but his defensive effort and athleticism is a unique combination. Hopefully Sam Hinkie allows Philly to see how being paired with Embiid looks in the 2015-2016 season.

9. Maikel Franco-The recent minor league call up gives the Phillies fans a reason to watch, as he is the only current Phillies positional player that is viewed as a future everyday player.

10. Byron Maxwell– All eyes are on the big free agency signing. At first it was merely to help resurrect an Eagle secondary, but now with the Super Bowl prediction, another reason to remember his name.