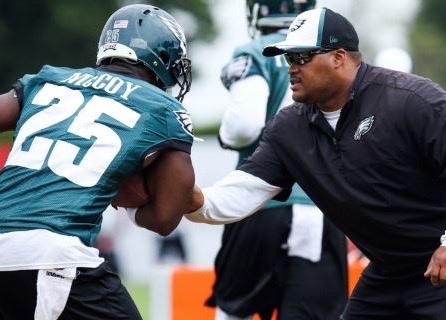 At the same time former Eagles running back LeSean McCoy was refusing to answer questions about why he insinuated that Eagles head coach Chip Kelly was a racist, his former running back coach, Duce Staley was defending Kelly at the Nova Care Complex.

Yesterday, the Eagles assistant coaches talked to the media and Staley, as expected fielded some questions from reporters about the comments McCoy made and what was his opinion of Kelly.

“Chip is not a racist at all,” Staley said. “Chip and I work well together. Everybody has their own opinion. I’m not here to actually talk about Tra or here to talk about what McCoy said. I know from my relationship with Chip that’s definitely far- fetched.

“We’re all here to do a job, and that’s what it’s all about. It’s about football. So don’t take something that’s a chapter and make it a book.”

Staley said the decision to trade McCoy was simply a business decision by Chip and the Eagles. He says McCoy knows the deal.

“My reaction, of course, LeSean and I are close,” Staley said. “You have to understand this is a business. He understands that. And everybody that works on this level understands that. He moved on with a better opportunity for him, and he’ll take full advantage.”

I don’t know if this is the end of this controversy or will it continue to be a topic brought up to Chip, LeSean and Duce.  We’ll see.

I would accept Duce’s comments as truthful, but those who want to believe otherwise will say that Duce is employed by Kelly so he is just saving his job.

The radio has been full of this talk, and as is the sign of the times, most is not constructive but rather destructive to overall race relations. There are knuckleheads on both sides of the issue, and with all that is going on in this country with race relations, Shady’s comments were irresponsible. I believe that he is an emotional guy, and he was hurt and wanted to strike out to hurt Kelly. But after time has past, he should either admit that he was wrong for insinuating that Kelly was a racist, or go in the other direction and provide specific details on why he questioned Kelly’s motives and why he believes they were based on race. Unfortunately I also believe that Shady is not the type of person that will ever admit he was wrong.

Turn on an American news channel and its the 24/7 race relations show.

You define yourselves by this issue.

Get your shit together already.

You think you don’t have issues in Canada too Vinnie? I was in Trenton Ontario last week and Montreal last December…you live in a divided country where they cannot even agree on a common language, and they treat each other with hatred. I understand the inferiority complex that you live with due to the big brother to the south, so every opportunity to try and throw a stone you will take it. Don’t act like your shit don’t stink too Vinnie, you have issues just the same.

We can’t agree on a language in America..WTF are you talking about?

Yeah hac, I get the joke, but English is still the official language of every state in the USA. Illegal immigration may be causing some issues in some areas, but all street signs are in English, schools, government agencies and the vast majorities of businesses do business in English. Not in Canada. The Quebec province is solely French speaking, and they have been trying for years to secede from Canada, and they routinely have a ballot initiative to secede. We may have issues with English and disagreements on immigration, but we have yet to have a state officially try and secede from the union (at least since the Civil War 180 years ago).

Most government agencies have signs in English and Spanish but understood

MOST OF CANADA HATES THE CANADIAN FROGS

Can’t be. Vinnie says that Canada is perfect and it is the US that needs to get it’s shit together.

People that think that he is a racist are not going to change while Riley Cooper is on the team. That is the foundation of the argument right or wrong.

Nfl players get over wife beaters, murderers, drunken drivers, hustlers, druggies who get suspended and hurt the team, felony dog killers but they can’t get over a name caller. No wonder our society is crumbling!

1) The Cooper issue. First, my opinion has long been that Cooper has been an under-achiever since his first year in the league. With his size and speed he has never produced (except for 6 games in 2013) as I would have expected. I wanted him gone before he ever uttered the N-word. That being said, with respect to Cooper, this occurred at the very start of Kelly’s time with the Eagles. After the report of the incident, the player apologized to his teammates personally, the team leaders (all African American, Vick and Avant) met and told the coach that he should remain on the team (after a ridiculously short “sensitivity training” session..whatever that means). I personally believe that if Maclin had not just been knocked out for the season with the ACL injury, that he would have been cut, but that is just my opinion, I don’t have any information to support that.

2) Shady decides to infer that Kelly is racist against black players after he is cut. He does not provide details, he only gives an interview and implies that because DJAX and he are no longer with the team, that Kelly is a racist. Given the chance to clarify or walk back his comment Shady declares that he is never wrong and has not regrets about defaming Kelly. No remorse.

These are two separate issues, again, IMO. People seem to forget that along with trading McCoy, he also traded his WHITE starting QB this offseason. I truly believe that Kelly is making these decisions based on football and how he wants his team structured. I tend to believe that he wanted a different running style of RB, he believed that Foles had shown enough times that he was not quick enough to run his system at a high level (even though he had a very high winning percentage overall), and that DJAX was not committed to the team approach of practice and preparation. None of these departures had to do with race. Keeping Cooper continues to frustrate many, and for many different reasons. I would believe that a large number of fans were personally insulted by Cooper’s comments and have never accepted his apology. That is their right and it is an understandable and reasonable response. Kelly has chosen to rely on the team leaders and personal interaction with Cooper, along with his critique of his play, to keep him on the team. I personally disagree with Kelly, and believe that they made a mistake giving him a big contract and by keeping him on the team.

Maybe some healing can actually take place once Cooper is off the team, but I truly believe that they are (2) separate issues. McCoy is an immature player who is hurt by being traded, and lashed out with an accusation. It was a coping method where he can blame his trade on a racist coach rather than understand that it is a business and maybe it was his running style that the coach wanted to change. Again, this is just my opinion, plenty of room to examine a different point of view.

Green fan well stated… Playing the race card is a simple out to deflect that you weren’t wanted… He is a little baby.
His team mates forgave him when he threw the girl off the bus which was despicable.

Lots of Musicians From Canada

How could you leave RUSH off of that list?

So true hac…Getty Lee and Neil Peart…but RUSH was in the middle of Paulman’s list. At least he didn’t list Bieber!!

I tend skim Paul’s posts! Good job paulman. Neil young and rush are two of my all time favorites

Neil Young right up there with the Band,Dylan & Grateful Dead for me..

grateful dead with trey july 4th – ILL BE THERE

Nice Mhenski
I saw the Dead (with Jerry Garcia) about 30 Times or so in 80’s, early 90’s
I had 2 opportunities to get Tickets at Cost for the Chicago Shows from Friends but turned them down.. Just have too much going on with Family that July 4th Week to go .. Trey and Bruce Hornsby, Jeff Chimenti on Keyboards with the Core 4 (Weir,Lesh,Hart & Kruetzmann) should be a great time .. .

I think the Rock has some brother in him and he’s from canada!

Nah Cigar, the Rock was born in Pennsylvania, he’s Black and Asian my friend no Canadian.

I think you are right Biggy. Allentown area I think.

The Rock (Dwayne Johnson) was born in Hayward,California which is just outside of the San Francisco/Oakland Area

Your are right Pman. He moved to Bethlehem PA in the 11th grade and attended Freedom High School. He played football there and was recruited and played at The University of Miami. I believe that his Dad may have been from Canada, and that Johnson has dual citizenship, so zilent you are right too.

Don’t trust google! They show the rock in images of ‘famous black entertainers’.lol

HAC, the Rock’s biological father is Rocky Johnson who happens to be black. What is so funny to give a lol? Most so called blacks in the USA are of mixed race but are still labeled or identified as black.

The lol was because I said he was from Canada

Damn big back to drake only lol

The Rock’s father is famous hall of famer WWF wrestler Rocky Johnson, who happens to be black. The Rock’s mother is Samoan. It’s that old one drop of black blood thing.

Yea as white we think hac is I dont think he meant it the way you think ehl….lol

Hell, I’m 1/2 Italian and have Darker Skin than you Zilents…. Ha

Lol but yea those italians Can get pretty dark

My Dad’s Family is All Italian but his Mother was from Northern Italy and had Fair-Skin, Red Hair and Blue Eyes…
My Mom is Irish and I probably take more of her Side and have lighter skin,
hazel eyes..