Sam Bradford In Team Drill And In Rhythm 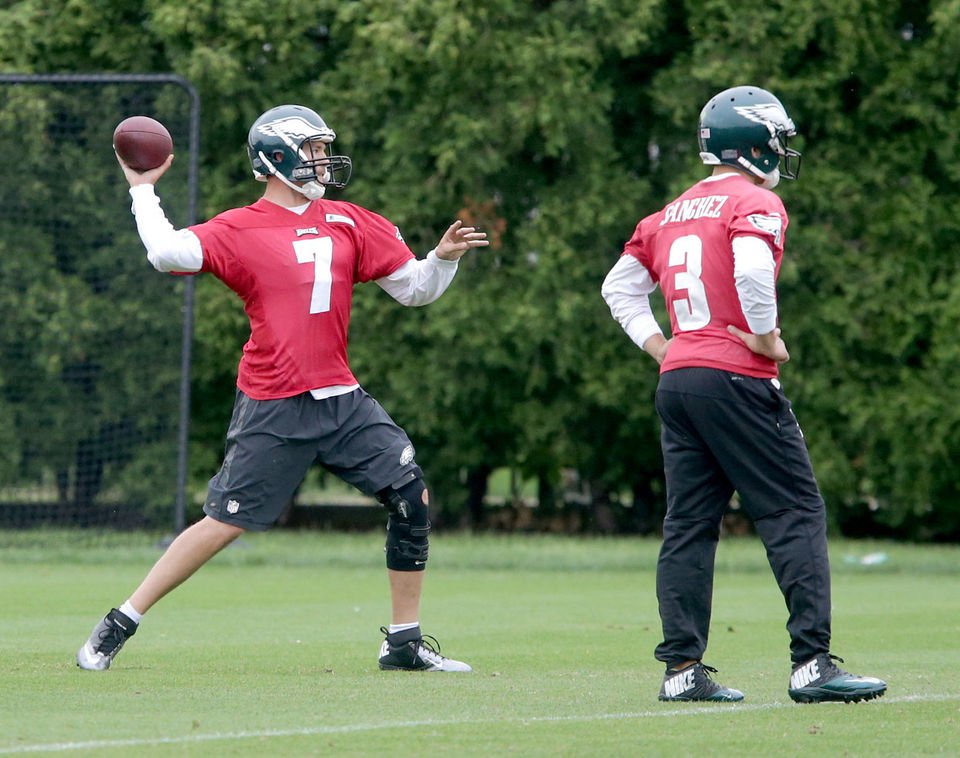 It was a game situation team drill, when the Birds number one offense was taking on the number one defense.  It was first down and ten, then second and short.   Bradford, who up to today had been watching the team drill part of practice.  He completed the first pass to his left side on a swing route for about seven yards, then he got the ball downfield on an inside route for another six yards, before completing another pass on the other side of the field for another five yards.

These plays were run in Chip Kelly’s up tempo style and you could see that Bradford was getting in a rhythm. it was one-two-three and the ball was out of his hands and each one of them was on the money. Each throw was a beautiful spiral that zipped out of Bradford’s hand.  This was a little taste of what the Eagles hope we will see a lot of very soon.

There’s no question that Bradford is making progress.  His confidence is growing as he gets more and more reps in this offense.

On a side note, Bradford tried to connect with Jordan Matthews on a crossing route and inside linebacker Mychal Kendricks broke on the ball.  There was a collision.  The pass was broken up and the two players were laying on the grass for a while.

During these OTA workouts, Bradford continues to wear a big black brace on his left knee.  He started wearing it in St. Louis because head coach Jeff Fisher made it mandatory.

“That’s his preference,” Chip Kelly said earlier today. “If he feels comfortable in a brace, he can wear a brace. We don’t have any rules on (braces).”

Cary Williams Has Changed Teams, But He Hasn’t Changed

If Foley threw 4 plays for 6 yards each in practice everyone would be saying he has no arm strength. He blahblah.

W/ Sam Bradford – No one even comments.

Which is worse? lol

This is what we’re going to get because Kelly runs a “horizontal” passing scheme. Bradford should do well at that. He’s had a lot of practice. Foles is a much more vertical passer, despite the idiots in here moaning about his ficticious his “lack of arm strength”

I hope the horizontal passing attack, which will be filled with screens and flares and such will work in the NFL….but I do have my doubts. Again, I go back to Oregon running the exact same screen 4x in a row vs Fla State (only mentioning this game ’cause I figure people watched but its what Oregon has been doing for years) and have a hard time thinking that’s going to work against good Ds in the NFL….but we’ll see.

vinnie all that is true. my hope is that it is ‘revolutionary’ in the way that the west coast offense was. If you remember, that was a short pass thing and a new stat was developed…Yards After Catch or Run After Catch. The 49ers rode that to 4 sujperbowls and Montana and Rice went to the HOF… One can only hope!

Bradford Will pass for 65% in this horizontal passing attack for a 4-5 Yard Average Pass Attempt..
The Big Issue with the Horizontal Passing attack is that once inside the 20-25 Year Line (Red-Zone) it just doesn’t work as Defenders don’t have to worry about getting beat over the Top..
Oregon’s Success was playing the game at warp speed and basically wearing other College Team’s out thru conditioning & attrition and a lack of preparation when playing outside Conference Opponents who are not used to Playing & Coaching a High-Tempo Office.. This doesn’t happen at the NFL Level …

These are the rankings over the past 2 seasons for Chip’s offense:

I think that his offense is working pretty well Paul. If Chip ever figures out how to score within the 5 yard line, it could get really interesting.

bugs thats the thought of bringing murray in…

I hope so HAC

During a Tuesday visit to Eagles OTAs, CBS Sports’ Jason La Canfora described Sam Bradford (ACL surgeries) as “still hobbled,” and noted that Bradford did very little work during team drills.
Meanwhile, Mark Sanchez strung together another impressive practice. Bradford is reportedly donning a “large brace on his leg,” and is “limited in his ability to work on the field.” La Canfora says to “hold off on inking Bradford in” as the Eagles’ Week 1 starter. La Canfora wrote that Bradford “doesn’t appear all that close to being ready to play an actual game.” While Bradford remains the favorite, it’s become increasingly clear that the Eagles’ quarterback job will be open to a true competition entering training camp.
Related: Mark Sanchez
Source: CBS Sports
Jun 10 – 12:09 AM

Gotta Luv It
Reply to  mhenski

And you posted this to sayyyyy ???

mhenski
Reply to  Gotta Luv It

we r fucked its equally likely that sanchez is our qb as it is this scrub bradford. awful trade, awful qb situation FUCKKKKKKKKKKKKKKKKKKK

Which is pretty much what I’ve been saying all Spring that Bradford is unlikely to be ready mentally and physically by Week #1 to Start and that it will probably be the 4th/5th Week of the Season before he’s 100% ready..
Does Chip Kelly you Play a 80%-85% Healthy Bradford over a 100% Healthy Sanchez, who knows this System well… Probably not …
Go Sanchez…

I watched him move and he does not appear hobbled by any reasonable definition of the word. He is up and bouncing. It is also not his back leg when planting so he should be just fine.

Oh no Ya’ll don’t. Some on here wanted to run Foles out of town as soon as possible and now you all want him back. Tough shit. Sam is the QB upgrade we needed. (I wanted to see Foles in a down field passing attack prior to kelly getting here and after his 1st season) Kelly told us all by getting rid of Jackson that he was not interested in 60 yard bombardments of defenses with Foles. He wants JOE MONTANA because he is using WEST COAST concepts that Andy Reid WENT AWAY FROM with players like Jackson. Kelly want’s WCO 2.0 at Warp speed. Its a combo of the Bills and The 49ers. It is going to work. WHen teams creep up to stop the screens and slants then our fast but not Super fast Receivers will be enough to get over the top on the occasional X play but it will not be the go to staple. High percentage at a high rate of speed is what we will see. OH and Bradford is perfect for it and Sancez will show enough to get us at least a 3rd rounder next offseason.

Thats old news henski recently they said the gimp looks much better then what la canfora said…..point being just go see for yourself I will be at first open TC to see the team anybody else going

It doesn’t matter how Bradford looks in practice. The guy hasn’t played a down of football in 2 years. No one (including Bradford) will know how he will handle real time action until he’s there and bodies are flying.

Point being some think he is fine others think he wont be ready…..and when I say fine I mean on schedule…..we will see but I dont mind sanchez for 3 or 4 games if that means bradford comes back 100 percent…..sanchez is a top 5 backup in nfl…..he can get you through until bradford is ready

Looks like tissue paper maclin is already sidelined with a inflamed foot…..his numbers will be terrible in kc