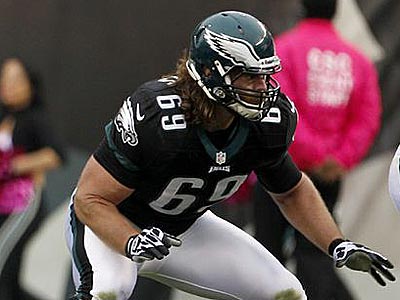 Former Eagles Pro Bowl guard Evan Mathis says he had made his reservations to come back to Philadelphia this weekend, so he could participate in next week’s mandatory workouts at the Nova Care Complex.  Mathis didn’t understand that Chip Kelly doesn’t want a veteran with a strong leadership position on the team like Mathis, coming in and contaminating his locker room.

Does Mathis want to play football for the Philadelphia Eagles?  Would he have been saying positive things to his young teammates when he arrived next week?  No, he would not have.  I’m sure he would have had some choice things to say about Kelly and the rest of the Birds front office.

In my opinion, the last thing Kelly wants is a player of Mathis’ status, a Pro Bowler, coming in and getting his team distracted.  Remember how important the culture is to Kelly.  He wants his players focused on the goal of getting better and not into focusing the Mathis controversy, which would have dominated everything, were the guard to have reported next week.

I saw the divorce coming.  We all saw it.  It was just a matter of time.  Kelly decided to cut the cord early and protect that positive “Growth Mindset”.  Some of Kelly’s moves are unusual, but if he wins, you’re going to see a bevy of coaches copying him.

I have seen veteran players, who were in contract squabbles, contaminate the culture of the locker room.  They were good players, so I don’t know if taking them back was a good thing or a bad thing.  Kelly might be right to get rid of Mathis, but we won’t know right now, but in a few months we will see whether he was right or wrong.  If those young guards step up and get the job done, then he was right.  If they don’t get the job done, then he was wrong.

I’m sure in Kelly’s mind, he doesn’t want the mindset of his young player affected by a bitter player.  Kelly has been very clear about what is most important to him.  If the team gets better in the near future and wins a title, Kelly’s strategy will be copied and he’ll be a hero,

When the Eagles players started abandoning Pro Bowl left guard Evan Mathis I knew it was just a matter of time until Mathis was playing for another team.  It’s very unusual for a player’s teammates to abandon him during a contract squabble, because they figure at some point they’re going to be in the situation.

Mathis says it wasn’t a long conversation between he and Chip Kelly.

“We’re going to release you so you can see if you can get what you want,” is what Kelly told Mathis.

Mathis says he asked the coach, “Are you sure that’s what you want?”  The offensive lineman says the coach didn’t really respond, but was very cordial in the conversation, as he made it clear that Mathis was no longer a Philadelphia Eagle.

The situation had gotten personal, when the Eagles took an offer off the table.  I”m sure Kelly didn’t want Mathis coming into town and talking to his teammates about his grievance.  You can see that Kelly wants to have a group of guys focused on football and getting better rather than contract squabbles.

So there you have it.  It will be Allen Barbre and Matt Tobin or Andrew Gardner starting at the guard positions when the season starts for the Eagles.  They’ve got plenty of time to get ready.

Chip Kelly is Shaping The Mindset of His Football Team

Tra Thomas: Eagles Are Better On Left Side Without Evan Mathis

‘Evan we were going to pay you $12-13 million to end out your career. I don’t think you will make a dollar more than that…’

I mean I think mathis is an idiot for turning down 12 million dollars – with that said if I hear the word “culture” again in regards to Kelly and this team I’m gonna scream.

How about wins – playoffs – championships – those are good words. SMH.

Tra Thomas was just on 97.5 and stated something Hollis Thomas just said the other day. mathis wasn’t very good. It was a farce. He looked at a lot of film and said that Mathis didn’t even fit with Jason Peters, he would fire off the ball leaving a gap and leaving a lot of pressure on Peters who had a different style more lay back and manipulate with technique. Its interesting because Hollis Thomas also said the other day that Mathis wasn’t very good. Maybe that’s why Jason peters said Mathis may not even start if he did come back and didn’t support Mathis one bit. So before every fan who has never broken down one piece of film in there whole life disagrees there may be something behind what the professionals have stated.

Nobody thought the sky was falling without Mathis.

He’s the least of the Ealges problems.

you obviously have not read this blog or listened to WIP… I’m thinking the eagles will fold as a franchise without shady, DJAx and mathis…

We all saw this coming, when Mathis decided to skip the Voluntary OTA’s for a 2nd Year in a Row, there was no way Coach Kelly was going to have him back now that he has total control over the Personnel
One thing that Kelly will learn at the NFL is that some Players are motivated more by $$$ than n just the pure joy of playing Football.. He’s now dealing with grown men and adults that love Football but also understand it’s a business
Mathis has been unhappy with his 5 Year Deal that he signed in 2012 and has made no secret about it, but unfortunately for him, the Guard Position is one of the least “Valued Positions” in the NFL and it’s just the way it is…
Coach AR loved his OL and was a former OL himself and probably overpaid the Eagles OL for years … Both Herremans & Mathis were highly paid and now as they aged, got injured coach Kelly was not as high on them as the Previous Coach and GM…
Kelly wanted to make the break and was waiting until the Voluntary OTA’s were over and didn’t even want to give Mathis a chance to start showing up for the mandatory OTA’s as He did last year.. Instead Kelly cut the chord and decided to move forward without him and eliminate any hanging distraction about Evan Mathis.. Kelly is focused on improving the Team and will not be wasting 1 minute of his time worrying, talking about Players who are 100% committed in the Program… It’s the way it is and kind of refreshing to see to be honest, but do understand that he will continue to lose a player here and a player there because of his stance…

I heard tra on 97.5 and to be frank, he sounded like a guy who regretted stating what he did earlier in regards to some black players having issues with Kelly. I respect Tra’s resume as a player, but he sounded like a gut auditioning for a future coaching job. This interview didn’t sound as “authentic” as the earlier interview. I also find it rather peculiar that all of a sudden a former pro blowl guard is suddenly not very good. I call bullshit on this. I have eyes too and nobody was talking this shit when Mathis literally mauling guys in front of him. This is part of my problem with LLCB (thanks bigs…lol). I’m all for innovation and fresh ideas, but I ain’t buying this reinventing of the game. IT IS PART OF A PROFESSIONAL ORGANIZATIONS JOB TO MANAGE PERSONALITIES!!!
A new qb rehabbing two shredded knews; 2 knew rbs and now we go into training camp with zero interior oline depth. I hope Kelly succeeds only because he’s my team’s HC, but I find it amazing how he’s gotten a pass each and every turn. He’s not above criticism. And contrary to what many of you think, his methodology is far more dubious than what many accuse Hinke of. Not even close. I am very nervous going into this season.

As for the Tra comments…The original comments would raise the eyebrow of any team he’s looking to coach for. The coaching community pretty much speak in ‘coaches speak’ and never throw anyone under the bus. guy gets fired he says ‘i want to thank the organization for this great opportunity and wish them success’– not ‘that organization sucked’