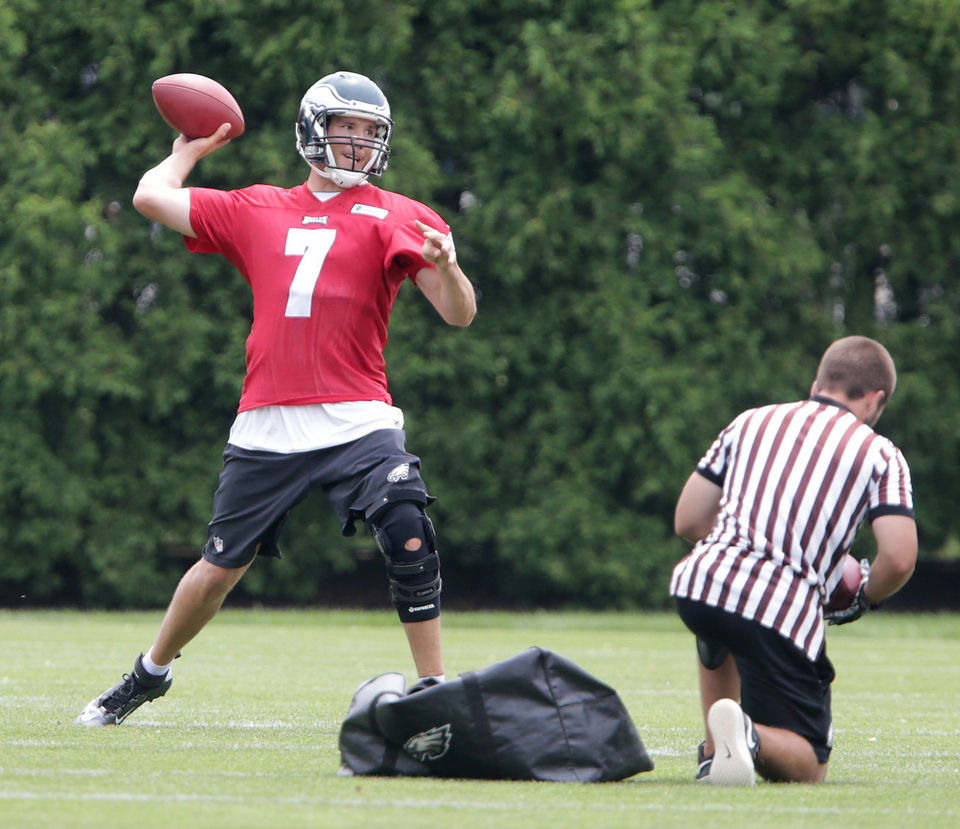 Eagles head coach Chip Kelly put his NFL career and his reputation as an “offensive genius” on the line when he acquired talented but injury-prone quarterback, Sam Bradford from the St. Louis Rams.

Kelly and the Birds traded away Nick Foles, a young quarterback, who had led the team to the playoffs while putting together one of the best single-season statistical performances by a quarterback in NFL history.  In 2013, Foles threw 27 touchdowns and only 2 interceptions, while playing himself into the Pro Bowl.  Kelly and the Birds also included a 2016 second round draft pick as part of the deal.

Front office people throughout the NFL were shocked at the move.  Foles wasn’t regarded as a proven NFL Superstar, but he had put together a great season in 2013 and then come back in 2014 and led the Birds to a 6-2 recording before going down with a broken collarbone. Bradford on the other hand has been injured much of his time in the NFL and when he hasn’t been injured, he hasn’t been anything special.

Kelly believes the combination of his offensive design, the team’s sports science program and a month or two of intense Chip Kelly style practices will get Bradford ready to shock the rest of the NFL.  Bradford stayed in Philadelphia, so he can continue the rehab program.  He will be here and doing his rehab work until training camp starts.

You can understand why Kelly is so eager to get Bradford fully healthy and on the football field preparing for the 2015 season. When asked whether Bradford would be ready to 11-on-11 at the start of training camp, Kelly replied, “God we hope so.”

“If I’m not ready for 11-on-11 by training camp something has gone terribly wrong”, Bradford said during mini-camp.  So yes, it’s likely that Bradford will be ready to go on August 2nd when the Birds start training camp, but it isn’t a guarantee.  Setbacks during the rehabilitation are not unusual, so we’ll see how it goes.

The reason they kept him out of the full team drills because they don’t want an offensive lineman or defensive player to accidentally roll onto his injured leg.  They wanted to let that leg get stronger, then throw him back out there in training camp.

One would figure that Bradford would be eager to prove Kelly and the Eagles brass right for making the decision to acquire him, so he would be pushing himself to get back out there.  One would think he would definitely be ready to start training camp doing everything, but that might not be the case.

Elliot Shorr-Parks of NJ.com points this out in his article about the goals of Bradford and the Eagles being in two different areas in 2015.  If Bradford were to take his time about getting back in action and not be ready to play until the middle of the season, it would put a great deal of pressure on Kelly and the Eagles, but it might be a smart decision for Bradford and and his agent Tom Condon.

Bradford has already made it clear that he doesn’t want to rush back out there because that’s what he did after the 2013 injury and he re-injured the same leg before the 2014 season began.  Yes, he got hurt in a meaningless preseason game and it cost him the season.  You can believe that his coach at the time, Jeff Fisher, was eager for him to get back out there.  Bradford is going to let that happen this time around, so I wouldn’t be surprised if he goes extra-slow.

Another injury and the rest of the NFL might be done with Bradford.  The truth of the matter is that if Bradford were to sit out the entire 2015 season and be healthy and ready to go for 2016, there are plenty of NFL teams who would standing in line trying to sign him for the 2016 season.

Bradford needs to return to action when he’s healthy and ready to go, but when is that time and who should be the one to make that decision.

If Bradford gets banged up during the season, how will it be dealt with.  You know Bradford is eager to get healthy and stay healthy, but Kelly’s main focus is on winning.  Maybe we will see Mark Sanchez come on the scene.

How should Chip Kelly handle this?  Should he push Bradford to return or should he leave everything up to Bradford, the doctor and trainer?  Should he treat Bradford like he did young injured safety Earl Wolff?  Kelly called Wolff out during a news conference for not getting back out there despite being cleared by the doctors.

If he’s not ready to have a full-go practice on August 2nd on in the near future, it could delay his return to action and the starting job until the middle of the season. Let’s say he returns to action in the middle of the regular season, plays well during that stretch and stays healthy, he will be in position to sign another multimillion dollar multi-year contract.

Bradford taking his time to come back to action might not be the best thing for Chip Kelly and the Eagles, but it might be the best move for the former number one pick and his agent.

Wow it has been 1 day since the last Bradford article. Might as well put up another one.

When August 2nd comes around it will have been a full year basically since he injured his knee. Thats more than enough time nowadays with ACL injuries because of the fact there not as career threatening anymore like they used to be. If Demeco Ryans and Kiko Alonso can come back after tearing 2 then so can he, especially when these two players play linebackers and need to rely on there ACL more than a QB does who wont run more than 30 times this season. Jason Peters was in his thirties with TWO achilles tendons and came back with 300lbs being put on them..Pretty impressive. Jeremy Maclin has tore his knee out twice as well and came back and had a career year. And I think everyone knew what Adrian Peterson (A runningback) did. Bradford needs to be ready to go and 110 percent for August 2nd. Your a QB, not a WR, LB, or 300lb LT who uses there knees and cut ability way more than a QB could ever dream of.

Does Sam Bradford Have the Physical and Mental Toughness to be a True #1 QB in the NFL and overcome obstacles…. The Jury is still out on Sam Bradford per most NFL Observers Opinion’s including mine.. ..

Hahaha, I’ll bet anyone here a large that foles outperforms Bradford this year, it won’t be close

Jake ..that would make songs and kools head explode..

no weapons in st louis and no oline…..he will be injured by week 5….foles willbe bad in st louis no offensive genuis there….jake you gotta look at the team not one player

A New O/C in St Louis, with a young but Improved OL with a decent WR Corps with a Young Solid RB Group lead by Todd Gurley, Tre Mason and Bennie Cunningham

The best thing the Rams have going for them is a Great Front 7 Defensively that just raise’s havoc on opposing Offense’s and QB’s and creates Turnovers,Sacks & Short Fields

If Rams Offense Averages 23-24 Points Per Game, they will be a Playoff Team with that Defense

This Team is Young, Young and will be the Team to Beat in the NFC West by 2016/2017 and remain Strong if Foles stays Healthy and plays smart

like i said that offense will be bad…..stop putting glamour on a shit sandwich because you want to be right…..redskins 2nd best defense in nfc…..bs pman

Bradford should be Ready by late September .. I would not be surprised if he
Sits out the Pre-Season Games or plays very little in 1 or 2 Games like a quarter or so just to work on timing…
Mark Sanchez will be Opening Day Starter as I stated since March
The Eagles are Paying $13.5 Millionin 2015 for this Bradford too…
What a joke of a Trade Kelly made … Fisher and Rams GM Snead are still pinching themselves some 6 months later