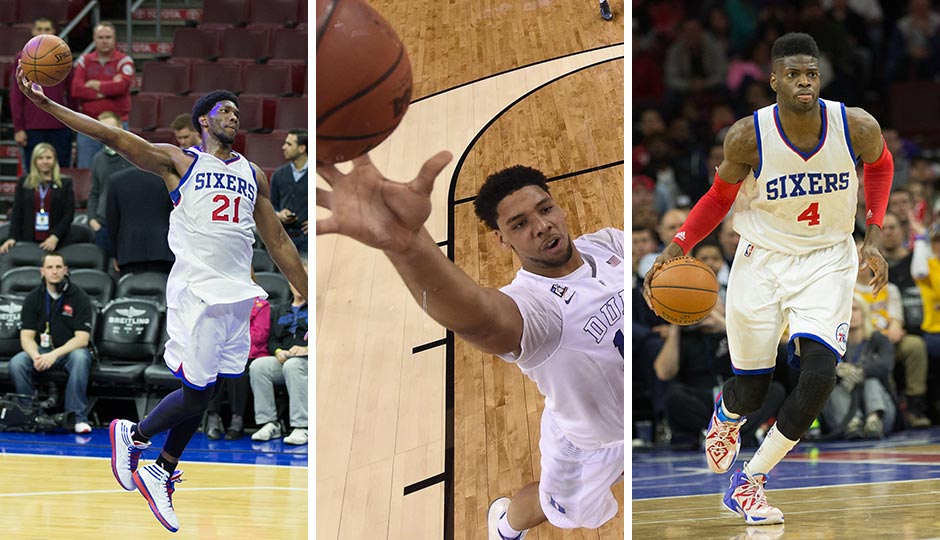 I know Sam Hinkie has taken forever to get the Sixers going on the right path and we’re all tired of tanking, but he’s got them going in the right direction with Jahlil Okafor now on the court and showing progress.  This young man has a great skill set in the low post, which is going to allow him to easily be an All-Star level player throughout his career.

Okafor has a great attitude which would fit in well in Chip Kelly’s locker room.  The young man wants to listen, learn and improve.

Nerlens Noel and Okafor fit together because Okafor is not the most athletic big man.  Noel is very athletic, so you could see them supporting each other because you don’t need to run plays for Noel.  He’s going to do his scoring off of the offensive boards.  He’ll be running the floor and blocking shots.  Nerlens will great at getting the garbage points, whereas with Okafor, the team will make him the number one option because he will be able to set up everybody else.

We all know what is happening with Joel Embiid, who may have a bigger upside. than both Okafor and Noel, but he also may never play in the NBA because of his foot.  Regardless the Sixers should definitely be able to build a championship-level team.

Don’t forget that the Sixers own the rights to 6’10” talented Croatian forward Dario Saric, who is playing in Europe and under contract with the Turkish club, Anadolu Efes, until the 2016-17 season with the potential for a buyout in the summer of 2016.  Sarin is a tremendous ball handler and outside shooter. Could you imagine a roster with Okafor, Embiid and Saric on it?

The talented Croatian won’t be coming this way for another year or so, but he’s very talented and only 21 years old.   There was a report which came out today that he wanted to come to the U.S. and play in 2015 for the Sixers.   Playing in the NBA is Saric’s lifelong dream.

Check out this list of the 76ers future draft picks, which doesn’t even include the deal with the Sacramento Kings, where they will get a shot at more first round draft picks.:

The blueprint of a powerhouse in the making…Everybody needs to bow down and thank Sam Hinkie for what he has given us that nobody else has been able to come close to in a decade and a half…Hope. Where were we 2 years ago? No assets draft picks or talent…Now we have the brightest future out of every young team in the league. Its not 100 percent because its justt the way the NBA is but its definatley something we can hope and look forward to watching out babies grow..If this dude turns this organization around he the god of General Managers..