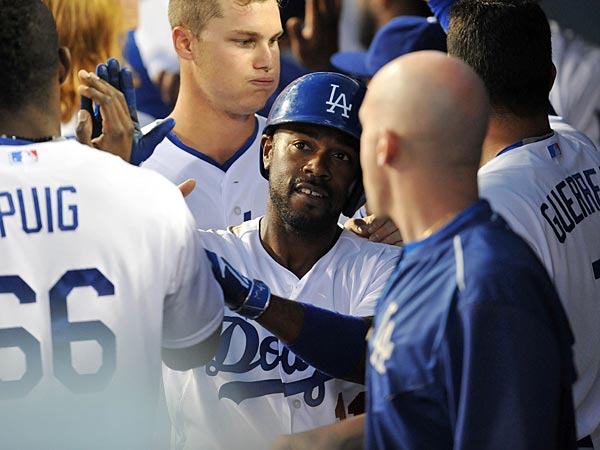 The Monday night Phillies-Dodgers game was the first-time former Phil and current Dodgers shortstop Jimmy Rollins got his first chance to play against his old team.  Rollins has struggled this season at the plate, but he hasn’t been struggling against the Phils this week.

Like his former teammates Ryan Howard and Chase Utley, Rollins is getting close to the end of the road, but he’s still having fun because he’s playing for a contender.   The former Phillie looks like he’s going to be able to leave the game on his own terms because he got out of here at the right time.

J-Roll left here with a year or two of playing ability left and now he has the chance to go to the playoffs with the Dodgers.  He’s in a positive atmosphere on a contending team, and everybody’s talking about what HE STILL CAN DO rather than what HE CAN’T DO.  In L.A. right now, Rollins is appreciated for his steadying influence in the field and in the clubhouse and whatever he does offensively is looked on as a bonus.

If the Phils had a team full of young studs and were contending, Howard and Utley wouldn’t be villains, they would be appreciated for what have done in the past and the things they can still do.

Chase and Ryan are still here in Phillies uniforms and who knows how their careers are going to end.  It might be over for Utley now as it looks like he’s being shown the door by the Phillies brass and Howard will get the same treatment, when he contract ends.  All three of these guys have been good to the city of Philadelphia and it’s shame they can’t go out in a positive way.  I think Rollins got it right, by getting out of this disaster when he did.

J-Roll is hitting only .213, but he still has some pop in his bat with eight home runs and 29 RBI’s.  The former N.L. MVP reached down deep this week and found a way to get some big hits against the Phils.

In the seventh inning of the first game on Monday night, Rollins stepped to the plate with runners on second and third and the score all knotted up at seven.  The shortstop stroked a go-ahead two run single by going the opposite way to leftfield.  He had two hits in that game and scored two runs, while leading the Dodgers to a 10-7 victory.

Last night in the third game of the series, Rollins was at again, this time he hit a three-run homer that broke open the game and allowed Clayton Kershaw to cruise to a nine-inning 5-0 shutout.  He got a hold of a Adam Morgan 2-1 pitch and hit it on a line into the first row of the left-field stands at Dodger Stadium.

After rounding the bases and heading into the dugout, you could see that big J-Roll smile.  That smile takes me back to the good times for the Phils and Rollins, Utley and Howard helped to put together the greatest run in Phillies history and they should always be remembered for it.