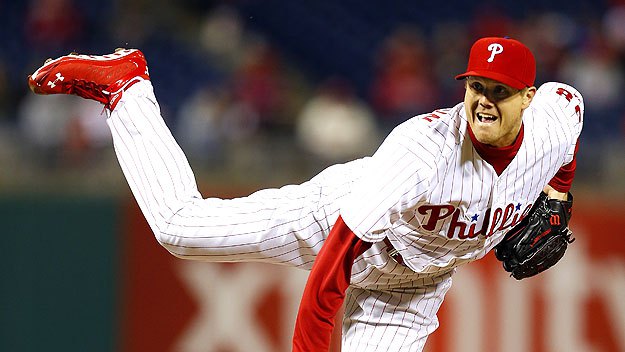 Phillies closer Jonathan Papelbon went to the top of the roof and screamed as loud as he could that he wanted to traded off of the Phils awful baseball team.  “I definitely didn’t come here for this”, the right-hander said numerous times in talking about his team.

The Phillies front office finally gave him what he wanted as they traded the bullpen ace to the Eastern division-leading Washington Nationals for one of their double-A starting pitchers, Nick Pivetta.

Finally, they got the “mouth from the south” out of Philadelphia, so he can now pursue winning a title.

Papelbon, who has converted 17 out of 17 save opportunities this season, wanted to get out of town so badly that he agreed to reduce his 2016 salary by two-million dollars, so that the Phils and the Nats could get the deal done.  The closer, who has an amazing 1.59 ERA this season, will make $11 million next year rather than $13 million.

The Phillies brass must see something in 6’5″ Pivetta because they get the chance to get good looks at him since he plays for Nationals double-A Harrisburg club.  He’s struggled a bit there so far, by giving up 12 earned runs in 15 innings, but the Phils like his stuff.   The youngster has a mid-90’s fastball, a nice curveball and a changeup.

“A strapping, big arm,” Amaro said about young Pivetta. “A guy who our scouts liked quite a bit. We have seen him quite a bit over the last couple of years. We like the arm. Hopefully, Nick can continue his development and continue his way up the ladder so he can help us in Philadelphia sometime soon.”

“He’s still got some upside,” Amaro said. “Our projections are a middle to the bottom of the rotation type of pitcher. Could be as high as a three. Could be as low as a five. A lot of it depends on how he develops. He’s got great stuff to work with, and I like the way our development people are working with our pitching.”

Good Luck to Papelbon and at least the Phils got something in return, though a Current AA Level Prospect is probably 2 Years away from competing for a spot for the Big Club.. Papelbon has pitched very well throats 2 Seasonsbut it was past time to move him and his Salary as he is not the type of Player you want around young impressionable Players who are still learning on how to be a Pro.. Meanwhile the Phils clear his Salary and will have Giles fill the “Closer Role” …

Phillies payroll will decrease by 40+ mill this offseason with the quitter lee being bought out , utley gone and Pap smear outta here.

My hopes for Phillies regarding Hamels.

Or keep Hamels and with the 40+ mill sign cespedes and one more mid tier of and sign 1 of the aforementioned pitchers.

We could get good in a hurry with young talent in Jp or seager , Franco, Nola and Hernandez of our gm makes the right moves.

I’m not in favor of any trade involving cole and a- prospects. I want dudes ready to go now or beginning or next year or cole to stay.

I agree with you Mhenski about trading Hamels. Give us your best or take off. No more, I want Hamels, but I am not going to give you my best prospect. It should hurt.

yup with 40+ mill coming off the books no need to dump hamels for anything less than young mlb guys and/or teams top prospects. better off keeping him then getting a bunch of 2017 prospects…

Phils will not be getting Top Prospects like Schwarber, Saeger, Betts etc..
Teams are very reluctant these days in giving up Top Prospects …

They will likely get 2 AAA Top Prospects who will likely play this year for the Phils but are still 1-2 Years away from everyday productive MLB Players…
and maybe a Rising Single A or Double AA Player who is 2-3 Years away..

lmfao you do realize you just said :

A. Phils will not be getting Top Prospects like Schwarber, Saeger, Betts etc..
Teams are very reluctant these days in giving up Top Prospects …

B. They will likely get 2 AAA Top Prospects who will likely play this year for the Phils but are still 1-2 Years away from everyday productive MLB Players…

which completely contradicts each other right?

lmfao at paul, you drinking again?

i know there is a difference between AAA and MLB ready prospects as does everyone here BUT THAT IS NOT WHAT YOU SAID.

Saeger is both a AAA top prospects and just top prospects in general. your other 2 prospects schwarber and , Betts are alrady in the majors so think the prospect label comes off once ur playing in the bigs

Phils will not be getting MLB Ready Prospects for Hamels..
Top AAA Prospects are just that, AAA Players, and not ready for everyday MLB which is who they likely will get for Hamels
Again, since the Phils Talent Pool stinks, some AAA Players that they may acquire for Hamels may play for this Phils this late 2015 Season, but that doesn’t necessarily mean that those Prospects were regarded as “MLB Ready” around Baseball Circles or ready for MLB

Scratch the Dodgers off the List for Hamels
They just Acquired RHP Matt Latos who earns $9 MIllion and OF/1B Matt Morse from the Florida Marlins for 3 Minor Leauge Arms.. ..

You guys are unrealistic thinking Teams are trading Saeger,Schwarber, etc..

and regarding seager my trade had the phillies giving dodgers back crawford – both seager and crawford are top 6 mlb prospects.

those in the know say dont scratch dodgers off the list because of the latos deal. you can scrub that pile of dookie off your wall

Did not think acquisition of Latos had any bearing on #Dodgers’ pursuit of Hamels. But availability of Price sure could. LAD wants one more.

Hamels Current Contract runs thru the 2017 Season with a Club Option after the 2017 so it’s not as short as state.. 2 & 1/2 Years which can turn into 3 1/2 Years is not Short
The best thing about his Dealis that you can lock In Solid #2 Pitcher who is stilling is prime as he would turn 34 after his Contract is up and the way the market is crazy anymore you are getting good Value for a proven #2 for what you almost pay for a mediocre #2/ #3 Picher or a Pitcher who is past his prime or has injury issues or a 1 year wonder… Hamels has a solid work record

The FA pitchers this off season Cueto, price etc will all get 6-7 years at $25… listen and learn asshole

fraudman– you are stupid–cueto and price are going to sign deals that last till their 36-38.. the beauty of hamels deal (and the rangers agree) is that its only 3 years.. stupid ass.
looking over the trade… 3 arms and 2 position players– prospects…ugh if 2-3 of these players are major pieces ….

trading for prospects is sketchy at best..on the surface this looks like they got more for Hamels than they gave up for Halladay- lots of similarities- in the halladay trade the phils gave up like their 2,3 and 5 prospect (none panned out) kept brown (didn’t pan out) looks like the phils got the 3 of the rangers top 5 and a couple of guys in the 10-15 range.
So far the phils have gotten by my count 7 arms and 2 ‘should be’ everyday position players. We need the catcher and OF to work out and 3-4 of the arms…

Bad Deal for Phils who basically sent Hamels/Diekman for A very good Catching Prospect in Jorge Alfado and not much else… LHP Matt Williams is 29 Years old with a 135 appearances in the MLB and has Career 105 Starts with a 4.21 ERA and is a 2 Pitch pitcher (Think of JA Happ) the other 2 (OF Nick Williams) are mid level Prospects
Unfortunately Hamels turned down going to Houston who had a better deal for the Phils… Typical Phillies Fashion where a clause in Hamels contract comes back to bite them in the ass…
Phils will also be paying a part of Hamels Contract which has 3 Years at $75 Million plus a Team Option 4 Year remaining…

As predictable as the sun coming up

Also predictable was the flip flop….

Did Hamels turn down Astros ? Who told you that?

Did Houston offer more ? If they did who they offer ?

Cole got a nice raise going to Texas and avoiding city wage tax and state tax he clears around 1.8 mill more a year. Wow.

I say no way he said no to Houston when u consider that extra money he could’ve earned there.

Good call tho Paul on identifying what Phillies would get. I just thought phills were smart enough to not move him unless they were blown away. Rangers didn’t give up any of their top 5 prospects. And Phillies got a coin flip at best catcher , a promising of and 2 lousy pitchers.

Total F trade by Our phils

We now have freed up over 65 million off our books for next year. But depleted ourselves so bad we aren’t spending that money

This trade reeks of Amaro and desperation. Really didn’t get anything back and certainly not the Rangers best prospects or Chi Chi. And they took Harrison’s contract too.

I see the Phils going the Route of the 76ers and Dumping Salary and getting young Prospects (Assets) and then hope to Draft & Develop Well and will not be Big Players in Free-Agency.. These next 3 Years will be similar to the mid/late 90’s for the Phils

A mention that Hamels refused waiving his “No-Trade Clause” to the Houston Astros was reported by ESPN. A unnamed Reporter stated that Astros Deal was better prospect wise than Rangers is all that it said…

Catcher Alfaro is the 49th Ranked MLB Prospect per ESPN and 22 Years Old
Nick Williams and the 3 Minor League Pitching Prospects are all a crap shoot and provide the Farm System with Depth but are probably 2 Years away from competing for a Roster Spot and Pitcher Matt Harrison is a Quality #4 Pitcher for most Staffs
Relief Pitchers Jake Thompson Rated #60 & OF Williams #64 which now Gives Phillies 6 Prospects in the Top #100 Per MLBPipline.Com

If 4 of these Players can make it by Mid 2016 or 2017 to go along with
Franco, Hernandez, Pitchers Giles then a Roster to build around..

Note that ESPN has Catcher Alfaro as #49th Prospect where as the MLBPipeline.Com has him Ranked at #69 which still gives the Phils 6 Prospects in the Top #100

Flip flopper where are the two pitching prospects got for Rollins and Byrd ? I can’t get to computer

Phils got 3 PItching Prospects who are all at AA Reading for Rollins/Byrd
who are doing pretty well so far and am not sure what their Rankings are.

MLB.com has Nick Williams rated higher than Alfaro. Williams is mashing in the minors with a bunch of walks and dingers. To me he is the prize as we need OF bad and this kid is producing. MLB.com has his ETA as next year

who is justing heyward?

Make that a young Jason Heyward when he was coming up with the Braves and is now a St Louis Cardinal..

Trading for prospects is a necessary risk.

reuben got taken to the woodshed

The catcher, OF and the number 1 pitcher all have a very good chance to have an impact. If they do it was a great trade, you can’t judge for a couple years.