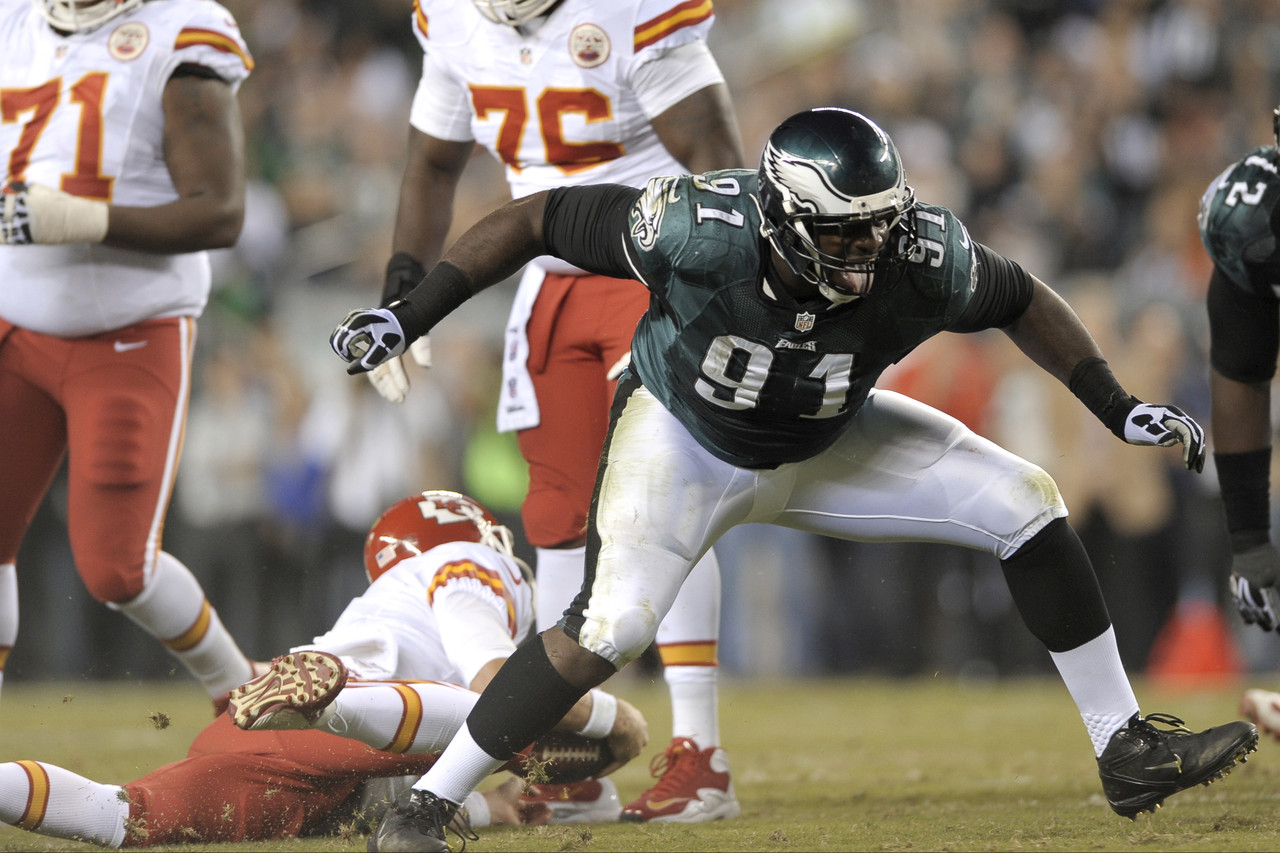 One of the keys to the 2015 Philadelphia Eagles football team is the play of their defense.  How good can this group be?  Can they be dominating to the point where they win a couple or a few games on the defensive side of the ball?  Can the Eagles defense be good enough to lead this football team?

A number of years ago, the Eagles went to the playoffs year after year and everybody talked about Andy Reid and Donovan McNabb, but it was Jim Johnson, Brian Dawkins and an outstanding Birds defense that made them a constant Super Bowl contender through that period.

Can this Eagles defense be that good?  I think this is a more talented group than the Johnson-coached defenses, but can they be as good.

We know their defensive front seven was outstanding a year ago against the run, but can they be the type of defense that dominates offenses and intimidates opposing quarterbacks.  Can this Eagles defense create turnovers and make life easy for the team’s offense? They have some outstanding players, but can the defensive coaching staff led by Defensive Coordinator Billy Davis take this group to a level that’s near the top of the NFL.

Chip Kelly’s squad is considered to be a team that is led by its offense, but many of the young, most talented and potentially dominant players on the roster are on the defensive side of the ball. Can this Eagles defense lead this football team?

Defensive end Fletcher Cox is one of the best defensive lineman in the league, but he’s young and  has plenty of room for improvement.  He hasn’t gotten anywhere near his ceiling.  Mychal Kendricks and Kiko Alonso are two of the better young promising inside linebackers in the league. They each have tremendous potential as big time playmakers and they haven’t reached their potential.

We got a glimpse last year about how good Connor Barwin can be, as he established himself amongst the best pass rushers in the league with his first trip to the Pro Bowl, while leading the NFC in quarterback sacks with 14.5.  Can we put him in position to get a sack with the game on the line?

In the secondary, recently acquired cornerback Byron Maxwell has been one of the better corners in the league for the last couple of years.  He’s capable of getting better.

Maybe the former Seahawks defensive back can bring some of the same “Pursuit of Excellence” attitude that he saw in Seattle, here to Philadelphia.  That Seattle defense leads the Seahawks football team and they’re the reason they should have won the last two Super Bowls.   The Seahawks defense is intimidating and dominating.  The Eagles defense needs to start taking on some of that persona.

I would like to see the Eagles defense continue to shut-down opposing running games, but I would also like to see them pressure and pound opposing quarterbacks until they crumble under the heat.  They should be working to have teams respect them like they do the Seahawks defense.  They can defend the run on the same level as the Seattle, but can they get better against the pass.

I’ve been very open about the improvement I expect to see in the secondary with the addition of defensive backs coach Cory Undlin.  The better coverage should give this front seven a chance to get to the quarterback.  It could greatly improve this football team, but they need to start talking this way.  The competition in training camp needs to be top level.

Cox wasn’t selected to the Pro Bowl in 2014 because he didn’t have enough sacks to draw the attention of enough NFL people.   Getting to the quarterback is what outstanding defensive linemen do in the NFL.  It’s the way they take over the game.  I want to see the Eagles put Cox in position to be a dominating player against the pass, especially in the second half of games.

How great a player can Cox be?  We’ll never find out, unless he’s given the chance to show us how good he can be.  Cox has been great against the run, but the NFL is a passing league and you must make plays against the passing game, if you want to have a dominating defense.

Cox along with defensive end Cedrick Thornton and nose tackle Bennie Logan are great at taking on double-team blocks in the 3/4.  They anchor themselves at the line of scrimmage and allow the linebackers behind them to run around and make plays.  I would like to see all of them Cox, Thornton and Logan improve their pass rush.

To Be Continued With A Closer Look At The Linebackers