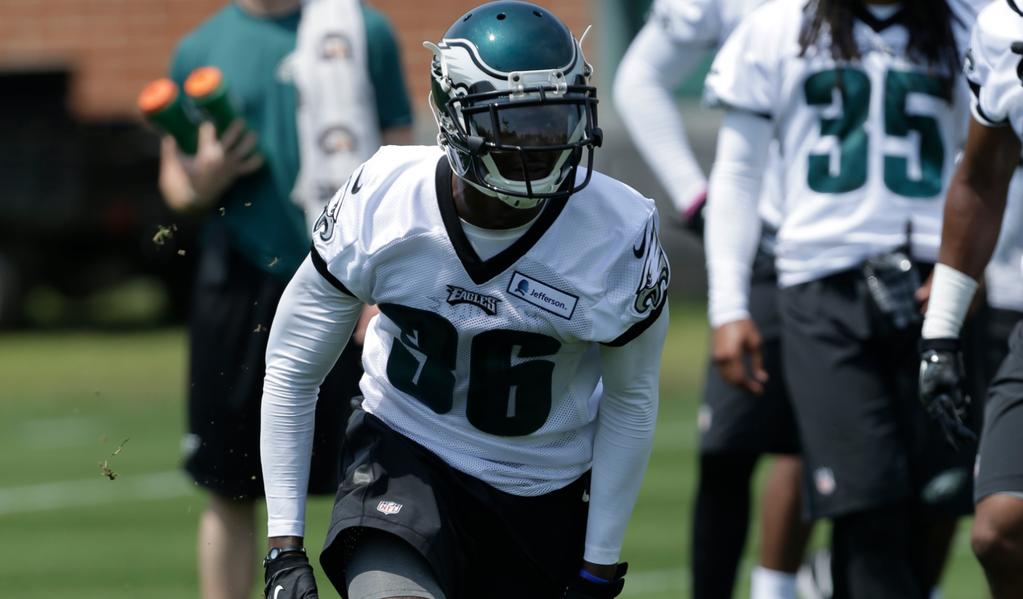 I haven’t gotten a word yet on Eagles cornerback JaCorey Shepherd, but it didn’t look good when he was carted off this afternoon at the Eagles practice.  He had a collision with running Darren Sproles near the sideline.  Shepherd’s teammates said he was in some serious pain after the play, so there’s definitely a chance that it could end his season.

Shepherd will have a MRI tomorrow and we’ll learn how serious it was after the doctors look at his pictures.

Eagles young cornerback Jaylen Watkins is next in line for that spot.  Remember the Eagles just traded away cornerback Brandon Boykin to the Pittsburgh Steelers for a 2016 fifth-round draft picks.

It was another good day for Sam Bradford, but he missed some throws and quite few passes wind up on the turf.   There’s no question Bradford is making more plays than the other quarterbacks.  Bradford is comfortable making any throw.

Still despite all the positives, we won’t know whether Bradford is ready until he faces a pass rush and gets hit.  I want to see him stand in there with a blitzing linebacker coming free.

WR Josh Huff has got to learn to secure the football after the catch.  He ran a nice route against cornerback Byron Maxwell and had the ball pulled out of his hands after the catch.  Turnovers killed the Eagles last year and they can’t let it happen again.

Huff did some good things this afternoon.  He pulled down a nice throw from Sam Bradford on a ball he had to catch over his outside shoulder.  It was a tough catch on a seam route and he turned it into a touchdown.

On another play in the red zone, Bradford stood in the pocket looking for a place to go with the football.  He looked to his left and looked to his right, then he hit Huff down the middle for six. Huff dove and pulled it in.

You could see the speed of backup running back Ryan Mathews during today’s practice.  Mathews ran a wheel route and caught a long touchdown pass from Bradford.  He ran away from a defensive back on that play.  I saw DeMarco Murray get the ball pulled out of his hands in the practice.  Fumbling has been a problem in his past.

I don’t see anybody lining up at the right guard spot on a consistent basis.  We’ve seen Matt Tobin, Andrew Gardner, Julian Vandervelde and John Moffitt for a couple of workouts.  Nobody has taken hold of the job, so it’s a reason to be concerned. We will need to see how this guys do in the preseason games. Remember, it only takes one blown assignment or missed block from these suspect guards to end Sam Bradford’s season.

For whatever it’s worth dept

TB Bucks signed ILB Lavonte David to a new 5 Year $50 Million Deal off the Heels of the Seahawks extending ILB Bobbie Wagner to a $50 + Million Deal so the Value at ILB is going up,up,up which is likely very good music to Michael Kendrick’s and his Agents ears…Eagles really need to decide by end of Camp if M Kendrick’s is part of their longer plans and if he is, three tend him soon and don’t let him hit the open market next Free-Agency or he is likely gone…

I’m inclined to.Believe that sometimes when you tempt fate ,there are consequences.Its a given that every team will succumb to injuries ,it’s the nature of the game .If you look at the glass half full,Shepard showed a prodigious pedigree as a 6th round pick ,that will go through the ACL rigors ,if that is the outcome of his MRI ,adding to the depth of next years team.The more essential factoid is that we are still uncertain at guard .Its guarding Sam Bradford from a similar fate that hinges a season .Im not excited in Qbs donning red”don’t touch” me jerseys .Im more interested in seeing the results when staring down that proverbial barrel,Theres a lot of moving parts that are new and ,integrating them and having the luck of injury free core players is every teams mantra.

I want to be given an injury free season to see chips vision ,without the blurr..or distractions and having to succumb to the dreaded next man up..

desert, next man up is a fact of life in the NFL- everyday injury reports come out of guys who were expected to contribute but are lost. The key tho is not losing the QB … Bradford has to be the guy- otherwise the other moves mean nothing.

Patriots Cut QB Matt Flynn who has 17 Career TD’s and has made $18 Million in his NFL Career which is not a bad ratio…
Patriots are expected to Sign QB Ryan Lindley who last played with the Arizona Cardinals… Maybe the Eagles can Trade Matt Barkley if he sows well in Pre-Season and get a 6th/7th Pick in Return as lots of Teams are hurting at the Back-up QB Position … The Bears,Ravens,Steelers,Cowboys, Seahawks,Chargers,49ers, Raiders just to name a few..

Steelers Kicker Shaun Suisham injured his Left Knee is last nights game and is undergoing an MRI.. Suisham converted 91% of his FG’s and would be a big loss for the Steelers if his Injury is severe…
DL Stephen Tuitt, LB R Shazier, S Spence and CB Brandon Boykin were cited for their strong and aggressive play last evening by HC Mike Tomlin

The Eagles’ interior offensive line of Evan Mathis, Jason Kelce, and Todd Herremans was very good in Chip Kelly’s first two years as head coach of the team. They won their battles up front with technique and quickness, and helped pave the way for LeSean McCoy to win a rushing title in 2013. They did a great job blocking linebackers and safeties at the second level, and were often tremendous getting out in front of screens and blocking downfield.

However, one thing the interior of the Eagles offensive line has lacked is a guy who can move defensive linemen off the ball against their own will. In his press conference Saturday morning, Kelly pointed to undrafted free agent Malcolm Bunche as someone who can move people.

“Real good, young prospect in the O‑line,” said Kelly. “He’s big. He’s physical. I think with those younger guys, and I think what Stout [offensive line coach Jeff Stoutland] is doing is moving [Bunche] around a little bit. He is playing both tackle and guard, which adds to his versatility. But he can move people. He’s a big, physical, strong run-blocking guy. But he does have a good base and knowledge in the pass game. So he’s a guy to keep an eye on.”

Bunche, having no knowledge that Kelly talked about him, gave a me a self scouting report that was the essentially the same as Kelly’s. “Big, physical, light on my feet, good in run blocking, need to be better in pass protection,” said Bunche.

During the pre-draft process, the Eagles took a close look at a number of road-grading interior offensive linemen who fit the same mold as Bunche. For example, they reportedly brought in the following offensive linemen for a visit: La’el Collins of LSU, Donovan Smith of Penn State, Jeremiah Poutasi of Utah, and Terry Poole of San Diego State. All of those players are known more for their run blocking than their abilities as pass protectors. They also showed interest in guys like T.J. Clemmings of Pitt, Darryl Williams of Oklahoma, and Louisville’s John Miller, who all also qualify as players known for their ability to move defensive linemen off the line of scrimmage.

Bunche and Stoutland were together at the University of Miami for a short period, so there was familiarity between them, but ultimately it was Bunche’s Eagles fandom that drew him here. According to Dave Weinberg of the Atlantic City Press, Bunche was pursued by several teams.

“I heard from a lot of teams after the draft. Denver, Miami, Green Bay and others called me. But I wanted to come to the Eagles. I’m from Newark (Delaware), and my dad (Curtis) was drafted by the Eagles (in the seventh round in 1979). This is my hometown team. Nothing against those other teams, but this is home for me.”

Sooooo, on Chip Kelly’s orders… Keep an eye on Bunche, I guess.

Good Stuff EHL, but 2015 Season at RG will be an Revolving Door it appears as Matt Tobin has not really progressed as they would have liked or the Starters Job would be his already… Players like Bunche & Coccia are the Future OL for the Eagles but are not ready for the here and now.. I believe Moffitt ends up being the Starter after about Week #4 of the Season..

I have seen enough of the Matt Tobin’s, Andrew Gardner’s of the world.

Talent has never been Bunche’s problem it’s been effort, at Miami and again at UCLA he just never sustained his competive fire. Hopefully Stoutland can get that potential out of him.

Hopefully, we sure need a talent to step up in that position. Jeff Stoutland was with him at the U, Stoutland needs to show his coaching skill, not just technique wise, but motivation wise too!

According to WIP update report…JaCorey Shepherd has been diagnosed with a torn ACL.

Damn the kid had potential…..oh well next season

Jacorey Shepard is lost for the 2015 Season, a real shame as he was off to a great start to his NFL Career.. Time for Jaylen Watkins/EJ Diggers to step up and nail down the SLOT CB Position.. We could also see the Eagles go pick-up a Safety to play with Jenkins and move Walter Thurmond back to his natural Position of Slot CB or who knows, maybe even Earl Wolff emerges at Safety ..
Eagles have some options and some time to figure it out..

Story on Bleacher Report that 3 teams are interested in pursuing Aldon Smith, with the NJ Giants being one of them.

we can pretty much bet the eagles wouldn’t be one of those three! He has had very little impact between injury and discipline issues the last couple of years. i think last year was 2 sacks in 7 games.

Lol, the Eagles, I did not even consider thinking about that. Sometimes a change of scenery helps. Hope the guy gets his life together first.

Giants, Cardinals and TB Bucs from what I’m hearing …
Cardinals and TB Bucs feel their Coaching Staffs are Rosters are Mature enough to handle a Volatile Player such as Aldon Smith and the Cardinals Staff knew him well playing against him twice a year and Lovie Smith of the Bears always loves having a big time Pass-Rusher on the edges
The Reality is with his legal issues all still in front of him and NFL Penalty/Suspension that’s likely to follow, it may be 2016 before Aldon Smith takes the field for anyone and like HAC noted above, Smith needs to get his life in order first before worrying about Football ..

A. Smith is essentially a non-story- guy hasn’t really done much in two years (an eternity in the nfl) and I think he has some suspension time this year… move on, nothing to see here. oh maybe paulman will make one of those ‘if he goes to the giants the eagles should be scared sstatements’