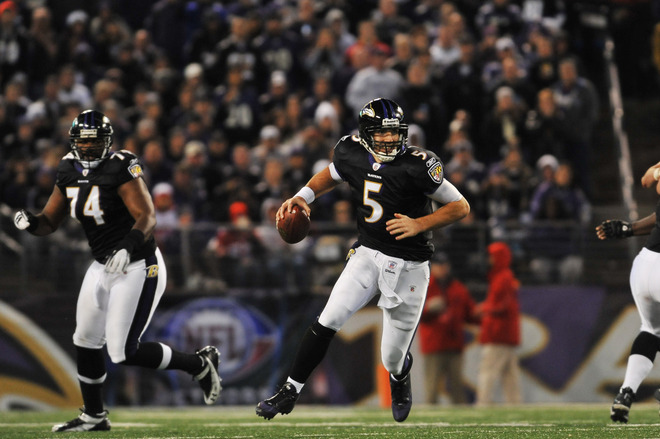 The Baltimore Ravens continue to reign as the class of this division.

While not quite an unstoppable powerhouse, the Ravens have stayed a step ahead of the Steelers and Bengals. Joe Flacco has developed a reputation as a top playoff performer, taking his game and the Baltimore offense to another level as soon as the calendar flips to January.

Flacco’s will have a new deep threat with first-round pick Breshad Perriman replacing Torrey Smith, who left for San Francisco in free agency. It’s tough to imagine aging veteran Steve Smith repeating the success he had last season, but he remains as fiery as ever and will continue to serve as a reliable target.

Defensively, the team lost defensive tackle Haloti Ngata, but the Baltimore defense has plenty of young talent to keep themselves successful. The team struck gold with last year’s top draft pick, linebacker C.J. Mosley, and they also believe they have Ngata’s replacement ready in Timmy Jernigan.

Beyond the addition of Perriman, and the loss of a couple veterans, the Ravens haven’t changed much from what they were a year ago. They’re going to be a solid, 10-win team that should once again make the playoffs in the AFC, and will be a club that no one wants to face once Flacco turns his game up.

The Pittsburgh Steelers are now more Ben Roethlisberger’s team than ever.

With the retirement of Troy Polamalu, the Steelers have lost one of the great faces of their franchise, and the club is much more an offensive powerhouse now than a defensive club like they’ve been in the past.

Roethlisberger threw for nearly 5,000 yards a year ago and 32 touchdowns, and has some electrifying help at the skill positions. LeVeon Bell turned in an incredible season, rushing for over 1,300 yards and adding 83 catches for another 854. He’s a true workhorse, and has become a focal point of the Steeler attack. Big Ben also has an elite receiver to work with in Antonio Brown, who led the league with a staggering 129 catches for just under 1,700 yards and 13 touchdowns.

While the Steelers should be able to put up plenty of points, they’re going to have trouble handling opposing offenses.

The team has some strength in their front seven, with four first-round picks invested in the linebacking corp (Ryan Shazier, Lawerence Timmons, Jarvis Jones, and 2015 top pick Bud Dupree) but the secondary is exceptionally weak. Not only is Polamalu gone, but so is veteran corner Ike Taylor.

Big Ben is this team’s engine, and long as he’s in place, the Steelers are relevant.

If people in Philadelphia were tired of Andy Reid’s struggles in the NFC Championship games, imagine what it’s like to be a fan of the Bengals.

Four straight years, the Bengals have made the playoffs, and all four years they’ve been one-and-done. And yet remarkably, very little has changed for Cincinnati.

Head coach Marvin Lewis returns for a 13th (!) season despite a career 0-6 record in the post season. One would think that this has to be Lewis’ last chance to get things right and take the Bengals forward in the playoffs.

The biggest problem that Lewis will face is what to do about starting quarterback Andy Dalton. Dalton regressed significantly last season, tossing just 19 touchdowns to 17 interceptions while throwing for just over 3,000 yards. That’s not good enough by today’s standards for quarterbacks. The good news for Dalton is that his elite receiver, A.J. Green, should be healthy after battling foot injuries throughout most of last year. Having his best weapon healthy gives Dalton more of a fighting chance.

Dalton will also have a solid backfield to support him, with Jeremy Hill and Giovani Bernard providing Cincinnati with a nice thunder-and-lightning combo.

The Bengals have built a solid defense, investing 12 draft picks within the first three rounds on the defensive side of the ball in the last five years. They brought back defensive end Michael Johnson, who spent one year with Tampa Bay, to solidify their defensive line which also features an elite defensive tackle in Geno Atkins and the team’s sack leader Carlos Dunlap.

The Bengals are good enough to compete in this division where there isn’t a huge gap between themselves, the Ravens, and the Steelers. However, this is a club that just has never been able to get over the hump and find a way to take themselves to another level.

Andy Dalton’s lack of progress is particularly concerning, and I don’t think that the arrow is pointing up for him. Ultimately I think this is a team that is destined to take a step back with major changes to come in the following off-season.

The Browns surprised a lot of people in 2014 by scratching and clawing their way to a 7-9 record.

Unfortunately, the wretched organization also endured many problems along the way that overshadowed the good that they were able to accomplish.

Worst of all was the immediate failure of last year’s first-round pick Johnny Manziel. Manziel fell flat on his face in his rookie season, letting himself be carried away in his party-happy lifestyle. Things got so bad that Johnny Football had to check himself into rehab over the off-season, and the organization was forced to look elsewhere for an answer at the position for this season.

That brings us to Josh McCown, who comes off of an utterly terrible season with Tampa Bay. McCown now steps into a situation with even less talent around him than he had in Tampa. Instead of Mike Evans and Vincent Jackson, McCown will be throwing to the likes of Dwayne Bowe, Andrew Hawkins, and Brian Hartline. Cleveland also took hits at the receiver position over the off-season, with tight end Jordan Cameron signing with Miami and eternally troubled wideout Josh Gordon failing to evade trouble and earning another suspension.

The Browns also haven’t had much luck adding talent on defense either. Justin Gilbert and Barkevious Mingo, the team’s first-round picks in 2014 and 2013, have been disappointing as well. The team still has elite corner Joe Haden, and linebacker Paul Kruger (coming off an 11-sack season) but this isn’t a group with enough talent to be anything more than average.

The Browns seem destined to take a step back from last year’s 7-9 mark. They’ve got very little firepower, and their offense is made up primarily of retreads and failures from other franchises. Expect Cleveland to be targeting yet another quarterback in next year’s draft.