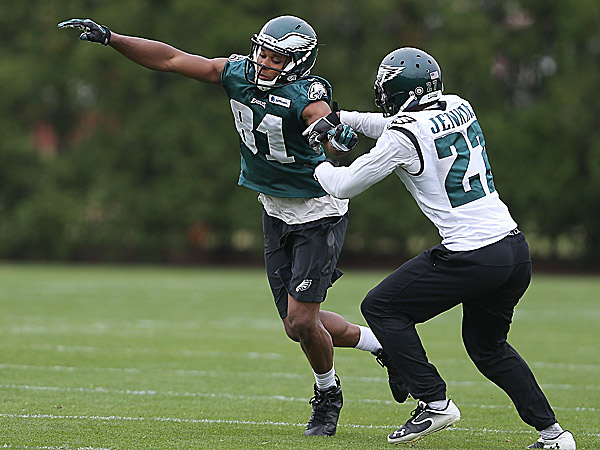 There are some interesting things going on at Eagles practice and messages being sent.  Eagles safety Malcolm Jenkins who is clearly one of the leaders on the squad, brought a chair over to running back DeMarco Murray, during practice.  Murray wasn’t practicing today. He was watching in his sweat pants.

Jenkins later said the chair was for all the guys who weren’t practicing.  I guess it was a message of sorts. There was a list of guys not practicing today, like Murray, Kiko Alonso, DeMeco Ryans, Zach Ertz and Mychal Kendricks.

It seemed that Jenkins was trying to send a message.

Malcolm Jenkins on so many teammates sitting out: when you look over and see them with visors and you're working, have to laugh or get mad

non-freaking-story!!!! guy makes a little goof. come on gcobb a little horsing around!

Grasping at straws here. Turning a classic joke/ball busting event into days of our lives…

tomorrow he makes a paper fan, pulls it out and mocks fanning them off, the next day he goes to the water cooler, pours a water and takes it to them…. hijinx!

From what I’ve read yesterday/this morning

Paul Couple had an appendectomy last week…Hamstring indeed. Earl Wolfe will be one of the first cuts I hope. As for the chair…meh its week one, these guys minus Wolfe and Couple will be starters and need to be healthy opening day. Let Marcus Smith get the reps and Hicks.

Let Murray sit. Have to manage his activity. Let him eat right, do PT, stretch and strengthen. Give him 10 carries in preseason then 15-20 a game … 279 carries for the year…

Wassup GCobb and his crew !!!!!!!!!!!!!!!!!!!!!!
Back from Jersey Shore today and I’ve begun back reading the articles including the comment section. I have to catch up on the NFL news and no better place than reading right here.