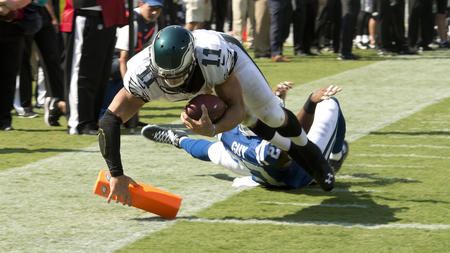 Okay so what do we know now about the Eagles quarterback situation, that we didn’t know before the game.

I just passed Sam Bradford as I was walking to the Eagles locker room and he walked out in his short pants and polo shirt. He was smiling because this is one of the few times, he was able to escape without doing an interview.  Bradford obviously hustled into the locker room, took a quick shower and got out there as soon as possible so he wouldn’t be forced to do an interview.

He was walking just fine, so I guess he’s ready to continue preparation for his debut next Saturday against the Baltimore Ravens. Bradford’s status remains the same.  He is the team’s number one quarterback and it’s not even close.

Mark Sanchez didn’t have one of his better day’s today.  His stats look better than he played.  Bottom line Sanchez didn’t move any closer to Bradford with the performance he put on today.  The veteran backup didn’t have his accuracy with him today and it cost him.  Last year those same accuracy problems resulted in some costly interceptions that kept the Eagles out of the playoffs.

Sanchez missed a wide open Jordan Matthews who was running a crossing route as Sanchez was rolling out to his left.  The pass sailed and that was well over the receiver’s head and out of his reach.  Matthews could have walked into the end zone, if he had been able to catch the football.  In fairness to Sanchez, he was rolling to his left and he made the throw on the run, but still there’s no excuse for missing that one.

On the next play Sanchez hooked up with Nelson Agholor on a quick screen to the right side of the formation.  The USC product went up and caught the football, then accelerated into the endzone for a touchdown. Sanchez get’s the credit for the TD pass in his stats,  but the play was all Agholor’s doing.  The rookie went up into the air to snag another high throw from Sanchez then he split the two defensive backs and was off the races.  Nobody was able to catch him as he ran into the end zone for a 34 yard scoring play.

Sanchez finished with 2 completions out of 7 attempts for one touchdown.  He threw for 52 yards and of course 34 of them came on the Agholor grab and run.

Bottomline:  Sanchez didn’t play well, but he played good enough to keep him position behind Bradford.

Matt Barkley threw the ball well today.  He got the ball out of his hands quickly and showed that he can throw the ball downfield much better than he could a couple of years ago.  Barkley knows this offense and could run it successfully.

He’s not the type of quarterback, who can tuck the ball under his arm and run through tackles, but he is a NFL quarterback. Barkley will and should be playing in the NFL this season.

Bottomline:  Barkley didn’t play well enough to move ahead of Sanchez or distance himself from Tim Tebow, so he stays in the same place as he was at the beginning of the day.  He’s battle Tebow for the stating TB.

Finally Tim Tebow came into the game in the middle of the third quarter and he moved the Eagles offense.  Immediately, I could see that the Colts were forced to respect his running ability.  Tebow made some outstanding throws, then he threw a few of them into the ground.

Tebow ran for seven yards for a touchdown on a quarterback keeper.  It was the type of play that shows the special quality that he brings to the team.  The former Florida Gator had use his speed to get outside of the contain defender, the he had to lower his shoulder at the two yard line to run over the last defender and get into the end zone.

When Tebow came into the game the Colts defenders at the end of the line had to start being careful about keeping contain.  This opened up allies to run up the middle and off tackle for the Eagles running backs.  Tebow’s ability to run will probably be one of the reasons they keep him here.  He ran for 15 yards on four carries.

Tebow finished the day completing 6 out of 12 passes for 69 yards.  He showed a substantial improvement in his throwing motion and he can still make things happen with his legs.

Tebow had some poor throws and he took some sacks, just like I expected, but he displayed his special ability on the touchdown run that separates him from the other Eagles QB’s.

Bottomline:  Tebow is still ahead of Barkley in the competition for that third quarterback position because Chip Kelly wants to have at least one quarterback on the roster, who adds the running element to the offense.

I was impressed with the defense…we need a bit more pass rush but I think we are much improved in the secondary!

Very little Game Planning so no real stunts,Blitzes
Before everyone goes gags over the Secondary who did look much better
The Colts did not play their Top 3 WR’s (TY Hilton & D Moncreif did not Dress and new WR Andre Johnson played about 8 Plays and had 2 Rookies in Duron Carter & Phillip Dorsett playing most of the Game with other young inexperienced Receivers… Eagles were the much sharper, deeper and better prepared and conditioned Team today which was obvious…
The Eagles # 2’s are much better than the Colts #2’s across both line of Scrimmages which was apparent from early on…
Eagles looked good and fresh, sustained no serious injuries and lots of young Players got substantial Reps.. RB’s Barner & Mostert ran hard and effective
The OL played well outside of RT Kevin Graf who got beat on almost every snap.. They held onto the Ball, and didn’t have too many Penalties..
A good 1st Game to build on…

DL & LB’s played well allGame except for the Series that Colts scored a TD on..
Jaylen Watkins whiffed badly on 2-3 Plays on that Drive and needs to keep his head up when tackling… You cannot drop your head and be a good Tackler..
Keep your Eyes/Helmet on the Ball Carriers Torso and square up and drive thru your target using your Shoulders while wrapping up with your arms ..
Eric Rowe had a nice Game as did EJ Biggers and Safteies Maragos,Reynolds and Prosinski were involved in many plays … Good Start …

Koolidiot. You still as excited over the Sanchez re-signing as you were 4 months ago when you continually praised the move and proclaimed he could compete for the starting job?

Sanchez is pure garbage. Crossing my fingers he gets traded to Buffalo tomorrow for Kiko Alonzo’s physical therapist.