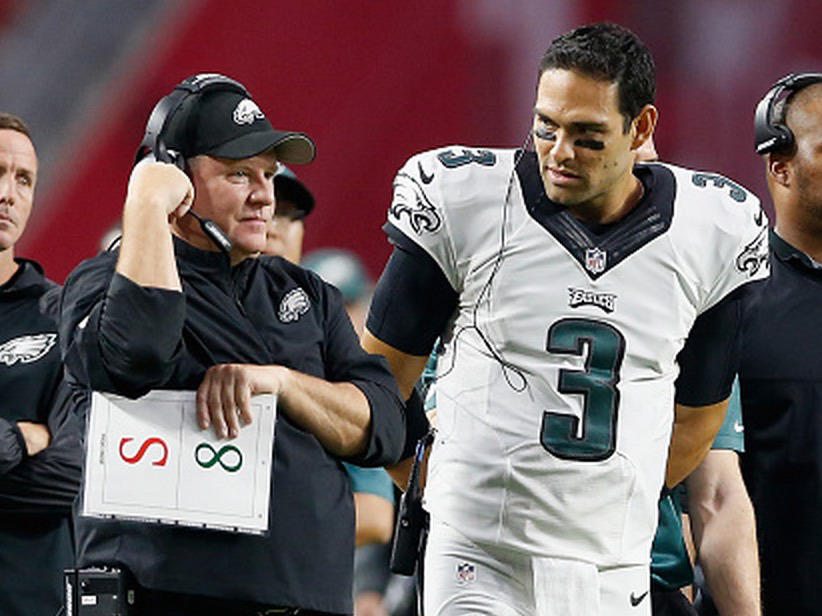 Mark Sanchez got to run with the first-team offense to open Sunday’s game, and did everything he could to show why he’s no better than a backup option in this league.

Sanchez was sloppy in both of his drives. On the opening possession, he was late on a throw to Trey Burton that ended up being broken up by the Colts. Burton had five yards of separation between himself and the coverage, but Sanchez didn’t release until it was too late. On the same drive, Sanchez missed Darren Sproles on a third and one by firing too hard and over the head of Sproles. A nice soft touch pass would resulted in a first down.

On the second drive, Sanchez missed another easy touchdown by badly overthrowing a wide open Jordan Matthews. The former Jet threw another terribly high pass on the next play to Nelson Agholor, but the rookie was able to make a great play on the ball to haul it in.

Sanchez finished just 2/7 for 52 yards and a touchdown, and for a guy who supposedly had eyes on winning a starting job, this wasn’t an effort that will make Chip Kelly think twice about starting Sam Bradford.

Agholor made a great play on a badly thrown ball by Sanchez, adjusting to how high and wide it was thrown on him, and managed to come down and use his explosiveness to roll for a 34-yard touchdown reception.

Later in the second, Agholor drew a pass interference on the Colts that brought the Eagles into Indy territory.

Agholor seems to have a lot of quickness, and showed a knack for making the first man miss. It was an exciting first showing for a guy who will be counted on to play a large role in his first season.

Barkley Vs Tebow Round 1

Matt Barkley made a couple of very nice throws on his first drive, dropping long passes right into the hands of Jordan Matthews and veteran wide out Miles Austin to take the Eagles right down the field and set up an Kenjon Barner touchdown run.

On Barkley’s second drive, he hit Trey Burton down the seam for a nice first down, but threw an interception on the next play on a ball that was tipped by Bjoern Werner.

On his third drive, Barkley did a good job avoiding the pass rush to pick up a short gain on the ground. On third down, Barkley put another ball on the money to Nelson Agholor but the rookie let his concentration down, and dropped the pass.

At the end of the second half, Barkley gave Seyi Ajirotutu an opportunity to make a play on a ball, but Ajirotutu let the ball fall right through his hands in the endzone.

At the start of the second half, Barkley went through his progressions well and ended up checking down to running back Raheem Mostert for a 40-yard gain that would help set up a Parkey field goal.

Tim Tebow took over midway through the third quarter, and did a nice job on his opening drive. Tebow delivered a strike to Eric Tomlinson on a long third down to keep the drive alive. Two plays later, Tebow hit Tomlinson again on a crossing route for another first down. The next play, he went right back to Tomlinson again and also drew a roughing the passer penalty.

Tebow didn’t do anything notable until the end of the fourth quarter. After being given a short field from an Indianapolis turnover, Tebow took the ball in for a seven yard touchdown run.

Barkley was extremely efficient, and showed a good command of the offense. He constantly put the Eagles in position to score points, and did a fair job protecting the football. Tebow wasn’t nearly as poised or decisive as Barkley.

Any time your football team makes it through a preseason game with no injuries of any kind, the game is a success.

But with the exception of Mark Sanchez, the Eagles got a lot of good individual efforts across the board.

Matt Barkley is going to make it very hard for the Eagles to release him. He’s doing exactly what they want him to do in order to drive up some possible trade value.

It’s a shame that the team is thinking of showing him the door so quickly. Today I think we saw some signs that Barkley is developing, and the idea of tossing any kind possibility that he might be a legitimate quarterback prospect on some level in favor of the gimmick that is Tim Tebow just doesn’t make sense to me.

Sanchez struggled with happy feet and was high on his Throws but only had
2 Series and though some of his passes were off target, Sprolshas to catch that Ball on 3rd & 1.. I thought Sanchez pace and tempo were good as the Eagles got their plays,lined up and executed the plays called pretty well except for a few errant throws but with only 2 Series in, I wouldn’t call it brutal
Barkley played well, got the Ball out quickly and had command of the offense and Team,a bad drop by Agholor on a 3rd Downwould have likely led to more points ….
All I all was a good performance by the Eagles and especially by many of the Young Players who arehungry to play and participate…

Brandon Graham made 2 nice plays back to back in the 1st Q. One when he ran with a RB (think it was an RB) and tackled the guy for a short gain. Good to see him being able to handle covering someone in space.

The front 7 was all over the Colts run game…but like last year, I still wonder where the pass rush is…..they can stop the run….but can they get to the QB without blitzing?

Rowe seemed to be all over the field.

People are saying good things about Marcus Smith….but I wasn’t all that impressed. Seems like he kept running wide way upfield, and I am sure that was his fault when they got completely deked on the read-option. He should have stayed with the QB. Doesn’t he see that 50x a day in practice? At least we noticed the guy a bit on the field…so he’s meeting our low expectations.

Barner doesn’t want to give up his spot.

Rookie dropsies for Agholor shouldn’t be an issue for long……..and if he soles that…..the WR corps could be set for a very long time. Kid is fast.

There seems to be a lot of “skill position” depth at TE, RB, and even WR….despite the fact that Huff doesn’t seem to actually exist. Are the Eagles going to keep 4 RBs and try to stash Mostert on the PS?

How can they not have found someone…anyone to replace David Molk?

I actually felt bad for that Graf guy watching his career deteriorate and swirl further and further down the drain with each successive snap.

Barkley played well, but he has no “zip”. I hope next week Kelly switches Bark and Tebow to give #11 a chance behind a better line. Those scrubs were terrible.

I hate Mark Sanchez. He is a total fraud. Why they paid that scrub (especially when he wasn’t getting any nibbles from any other team) is a bigger mystery than that Samsung commercial that played 2x during the game.

I know this is not going to happen, but based solely on today’s performance, you would keep Barkley and Tebow and cut Sanchez. Barkley played the best of the three, but I think in the end, Tebow makes the team because of his added dimensions in the run game and read option. I just wish he could throw the ball. I hope all of this is a moot point and it will be if Bradford is a solid starter and does not get injured.

If he were I’d take him over all the other 3 QBs on the roster. He’d be a good fit for this offense. And I’ve never been a Tebow fan.

Was anyone watching Andrew Gardner and John Moffitt? I wasn’t really watching them play. And Nelson Agholor is going to be a STUD!!

I watched the OL and Gardner played very well I thought and has the upper hand to be the Stsrting RG to open the Season but Moffitt also played well and is right behind him and should only get better and better as his playing reps and more understanding of the Eagles System comes to him..
I expect Gardner to be the Opening Day RG and if he falters, struggles gets injured the Moffitt will be waiting in the wings to take over…
LG A Barbre played very well also and the Eagles interior OL will have a nice challenge working this week versus the bigger stout DL of the Ravens

I forgot to DVR the game yesterday. I was going to watch it this morning.
—
Question?
Mark Sanchez avoided a sack and scrambled for a first down on the Agholor TD drive on a 3rd and 5 to move the chains for the 1st “first down” of that drive. Which lineman got beat or was it a blitz? (Johnson or Gardner)

I thought it was Lane Johnson who got beat on Blitz on that one but I could be wrong on the Sanchez Scramble..

I didn’t notice Walter Thurmond and I think that was a good thing since he was run over or beat deep. I was curious about how well he would play. Did Jordan Hicks’s play yesterday justify his 3rd round selection ?

oops, since Thurmond wasN”T run over or beat deep.

I thought that Matthews and Agholor stuck out to me. Seemed like Acho made a lot of plays to in the middle thanks to the play of the front 4.

I know that Tebow didn’t have a lot of help with the constant pressure that he was getting but he looked like a guy who hadn’t played in 2 years (I hope). Slow reads and decisions. He is going to have to improve a lot in the next couple of games.

ok well the bread and water was delivered and that was fine. time for the appetizers, lets see what bradford has

Players who Stood Out

Players who will need to step it up, in my opinion..

What stood out was parkey ..he was $$last year ,I don’t want to have to hold our breath on points after and field goals.I was very impressed by the plays made by bigger screen and Reynolds ,any depth in the back end is diamond in the rough.I agree with Vinnie and didn’t get bowled over by smith ,he seems very mechanical ,robotic.To imagine Sam I am ,and demarco Murray sprinkled in ,is a very enticing possibility .Sam has too ,must stay healthy ,as plan B isn’t any longer an option.The small sampling of mr 50/50 ,is Sanchez being bailed out by Agholor snatching the overthrown ball and creating separation ,otherwise he was putrid ,once again.Id actually love Barkley to catapult himself past Sanchez ,as he seemingly grasped the offense with much more eye appeal.He has no rifle ,but it’s not like Sanchez is possessing a gun either ..The front 7 ,and special teams seems to have picked things up from where they ended the season.Its only a toe in the water ,but so far the deep end of the pool ,looks inviting for this squad.IF …again IF Healthy..being there only adversary

Where was the highly touted huff the magic dragon?

Coach Kelly says he knows what Huff can do and that he was used as a “Decoy” to get other WR’s Open…. Good Grief…

Another words he “ducked” the question..pman

Good One DE,
Ducked, Decoy, You would think we were talking about a Hunting Show on ESPN… Where is Trent Cole when you Need Him…..Ha

All the Oregon guys make this squad?