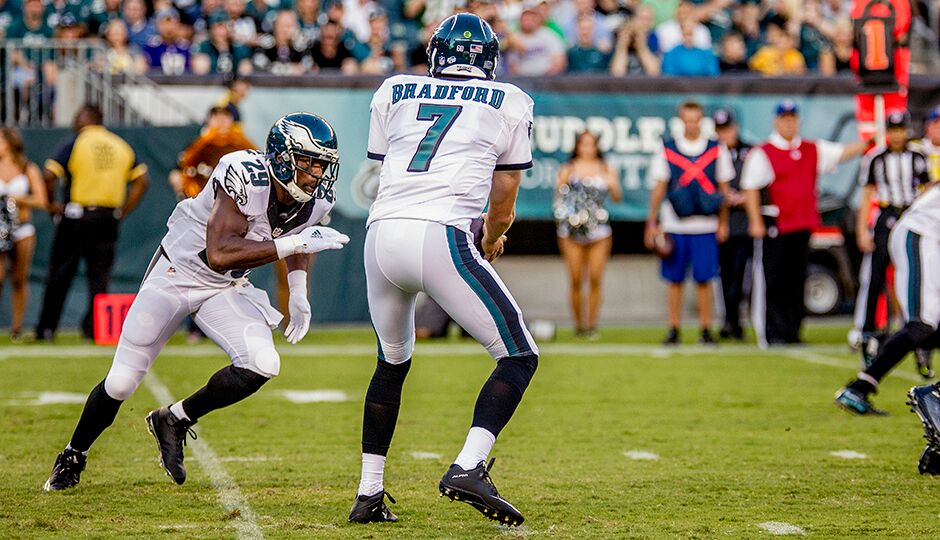 The NFL needs to clarify this quarterback option situation. They must decide whether they’re going to lean toward protecting the quarterback by making it illegal to hit them after they should know they don’t have the football.  They definitely can’t allow defenders to hit them in a place which will cause injury.

On the other hand they can decide to lean toward making sure the quarterbacks don’t get an advantage by making it legal to hit them just like they’re a running back, if there’s any chance they could still have the football.

It’s not clear right now which way the NFL is going on this, when you have Eagles head coach Chip Kelly saying one thing and Dean Blandino, the head of officials saying another.

“He’s considered a runner until he either clearly doesn’t have the football or he reestablishes himself as a passer,” Blandino said siding with Suggs. “So it’s not a foul by rule.”

“It was just a handoff,” Kelly said Monday. “Sam wasn’t going anywhere. I mean if you watched him, he handed the ball off.”

“Not every shotgun run is a zone-read play,” Kelly went on to day. “We didn’t run any zone-reads. We had this conversation last year, we don’t run as much zone-read as everybody thinks we do. We’re blocking the back side. [Bradford’s] not reading anything, he’s just handing the ball off.”

“I thought the interpretation on the field (a roughing the passer penalty) was fair”, Kelly said.

You can see here that Kelly has one understanding of the rule and Blandino, the head of NFL officials, has another.

This caught the attention of Seattle Seahawks coach Pete Carroll because he’s got a quarterback, Russell Wilson, who loves to handoff some times and at other times he fakes the handoff and keeps the football.  If you could hit him every time he hands the ball off, it’s going to make Wilson much more vulnerable to getting hurt, so Carroll had to say something about it.

“I have seen a couple of them and I really thought they were worthy of being noted as penalty plays,” Carroll said about hits on the quarterback after he hands the ball off. “Obviously we’re really tuned into that. “We’re counting on the league to do a really good job of doing that well so we take care of the QBs. You can force this thing about they’re a runner. When they don’t have the ball in their hands and the ball is already handed off and gone, guys need to make good decisions, hopefully. So we’ll be very much part of that discussion if things continue like it’s going, because it’s not right.”

“I’m sure that’s not the last time that’s going to happen; we just have to figure out a way to protect the quarterback,” Sam Bradford said yesterday. “I think we’ve got to find a way ourselves to keep ourselves protected, whether that’s backing up out of the mesh [the handoff/keep area], finding a different way to disconnect after that – I’m not sure how we do that, but we gotta make sure we’re not taking those hits.”

It will be very interesting to see how this works out.

On a side note..
With the recent Season Ending Injuries to same big name Players..
Does anyone really think that Game #3 of the Preseason will actually have
Teams playing their #1 Units for the 1st Half of Games like they used to..
I think experienced Coach’s with Veteran Players around the NFL will pull their Top Players back from Playing for fear of Injuries
This Week’s Eagles/Packers Match up was looking like a great one with
Starters on both sides playing the 1st Half.. Now I don’t think Rodgers or Bradford will see much more than a series to two..
New Coaches with new Systems or younger Players who need the Reps will see more Playing Time in Preseason, but established Teams,Coach’s or Players will likely not..

With the Pre-Season halfway over, Its time again for me to Grade how the 1st Round Picks of the 2016 Draft are doing from what I’ve seen, read or heard about them across the NFL ..

1) QB J Winston – TB Bucs – Has had a nice Start, Learning and Playing a lot and and has been well-received by Veterans – Grade A +

2) QB M Mariota – Titans – After a rough start in 1st Preseason Game, had handled everything like a seasoned Pro, His Play has been Solid, his Leadership has surprised some and the Titans are stoked to have him
Grade A +

3) OLB D Fowler – Jags – Lost for the Season on 1st Day of OTA’s back in May .. Incomplete Grade but a huge loss for the Jags who were counting on Fowler to give their Defense some Pass-Rush

4) WR A Cooper – Raiders – Is Off to a very Good Start, has learned their System Quickly and has meshed well with Young QB Derek Carr to give the Raiders a nice Tandem to build their Offense with. Grade A

5) OT B Scherff – Redskins – Has disappointed many with his overall lack of Athleticism, and not so good Feet though everyone loves his Work Ethic, Attitude, Toughness and his Coachability, but many question if Brandon Scherff was worth the #5th Pick. Grade D

7) WR K White – Bears – Huge Disappointment to learn of White’s Injured lower leg and now Surgery after the Workouts, OTA’s when they seen White struggling to get to top speed.. With Surgery, White is likely to miss the entire Season to a Player with mot much playing experience to begin with which could have a huge setback for his Career.. Bears Rolled the Dice instead of getting the Help they needed up and down their Line-up and on Defense especially — Grade D

8) OLB V Beasley – Falcons – Has come on the last few weeks to prove that he’s more than just strictly a Pass-Rusher.. He’s improved in both helping to set the edge (at 245 lbs) and dropping back in Pass-Coverage since he never really did it often while in College.. Shows show Flashes and has a very quick first step, and make no mistake, can get after a QB.. but can he improve in the other areas to become a 3 Down Player as you expect when you Draft a Player in the Top 10.. Playing on that fast Falcon Dome Turf, Beasley should easily get to double-digit Sacks his Rookie Season Grade B.. Playing 6 Games versus Rookie J Winston, C Newton and D Brees who all will have their share of Sacks given up should give Beasley ample opportunity to put some Sacks his Rookie Season.. Grade B

9) OT E Flowers – Giants – Has improved since the spring OTA’s and Summer Camp.. A Mauler, Big and Strong, has picked up Playbook pretty well and the Coach’s like his improvement and work ethic and will likely be their Day 1 Starter at the all important Position of LT – Grade B

10) RB T Gurley – Rams – Gurley was just cleared for Practice earlier today after the Rams have been very Cautious with his Activities all Spring and Summer and probably won’t see a lot of Action until middle of the Season
as he has a lot of conditioning and learning to do.. These were all known at Draft Time that Gurley had a ways to go in his rehabbing process. Grade C

Ravens Suggs plays RG3 next on Saturday. Ravens and Redskins compete for the same fans. This could get nasty.
—
Russell Wilson is the best Read option player in the game. If pass rushers get to hit him every time he hands the ball off to Marshawn Lynch he won’t last a month.

Word in DC is that HC Jay Gruden will send RG3 out there and Run 3 Slow Developing Read-Option Plays in a Row so that RG3 gets his head knocked off by Suggs and other Raven Defenders… The End of the RG3 Experiment is near
and now Coach Jay Gruden has his own Team in place..

Mo offense Gman but.. You wrote a lot of words but said next to nothing… Lots of “ifs” spelled out here.
I still say… Even with Sanchez we are a playoff team. Bradford has twice the arm noodle had… The rbs and lbs are the meat of this team and then Dline is not far behind. With scan just going down in Dallas… We should win the divorce. I have no problem saying that.

Read it again. It’s a debate to see how much they should protect the QB’s on the read option which is becoming popular in the league.

My bad completely. I was responding to the work on eagles predictions and somehow left it here.

I hope the rules are revised. They discriminate against running QBs. Wilson just as exciting and vital as Brady, and in his first 3 seasons, Wilson actually has better numbers. Let’s not forget that Brady had some great defenses, too. Further, last season, the Seahawks didn’t have a single receiver who was drafted and Wilson started as a rookie. Brady didn’t.