Billy Davis Weighs In on Suggs Hit On Sam Bradford 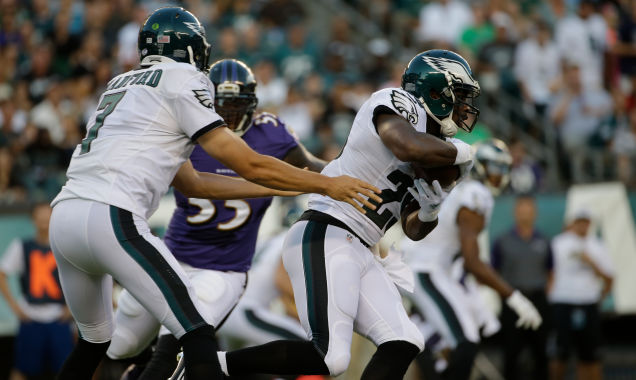 Yesterday, Eagles defensive coordinator Billy Davis talked about the ongoing controversy regarding when a defensive player can hit a quarterback running an option play and when he can’t.   I know you may think this has been talked about enough, but it’s going to prove to be very important in the future of the NFL.

First of all, we all know how important quarterbacks are, when it comes to the success or failure of each NFL team.  Sam Bradford and more specifically the health of Sam Bradford has been the number one topic of this off season.  If teams are able to hit Bradford each time after he hands the ball off, then he’s not going to survive many games in the season.

Here’s how Davis teaches his defensive players to defend the read option.

“If your responsibility on that call is to have the quarterback, then you absolutely hit the quarterback if you think he has it, but you hit him above the waist and below the neck because he’s back there,” Davis said yesterday. “If you don’t, you’re going to be flagged.”

“When it’s in that gray area, the NFL is going to protect the quarterbacks, period,” Davis said. “They always have and they always will. That is what drives the NFL.”

Hitting a quarterback in the knee area is something that has always been frowned on by the NFL, regardless of what the quarterback is doing.  The NFL surely doesn’t want speedy defensive ends to come flying into the backfield and be able to take out the legs of quarterbacks, while they’re focused on handing off the football.  It could mean open season on NFL quarterbacks.

I think they’re going to need to correct the head of NFL officials, Dean Blandino.  He came out in defense of Terrell Suggs hitting Bradford in the knee area after the handoff.

“We clarified this really in 2012 with the proliferation of these read option schemes and basically because the quarterback has an option, he’s considered a runner until he either clearly doesn’t have the football or he reestablishes himself as a passer,” Blandino said.  “So, it’s (the Terrell Suggs hit on Sam Bradford) not a foul by rule.

“It’s something that we will make sure we cover with our game officials because the defensive end coming off the edge, he doesn’t know if the quarterback is going to keep it, he doesn’t know if he’s going to take off and run or drop back and so we treat the quarterback in that instance as a runner until he clearly reestablishes as a passer or he clearly doesn’t have the football.”

I think Blandino is going to change his mind when a top NFL quarterback is taking out by a defensive player, tears his ACL because of it and is done for the season.

Is Chip Kelly Far Enough Ahead Of The NFL To Win A Title?

It is one thing if Sam Bradford on a the last year of his contract gets hurt and another thing if Russell Wilson his 65 million dollar extension kicks in is hurt. Seahawk Owner Paul Allen might have a different opinion on the future employment of Dean Blandino