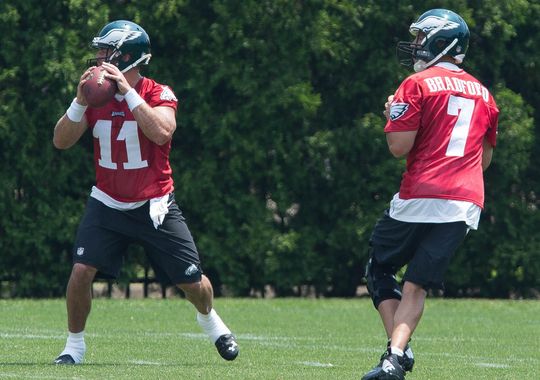 Barkley badly underthrew Josh Huff on the team’s first possession, leading to an interception. If Barkley had thrown the ball properly, he might have had a touchdown pass to Huff.

Barkley missed two more throws on the team’s second drive, overthrowing Trey Burton twice within three plays. Barkley would convert on a fourth and eight throw to Burton, standing up to a rush and delivering the throw to extend the drive.

Barkley was pulled after two drives to give way to Tim Tebow. Tebow played the second quarter and made a number of nice throws. He seemed much more settled than Barkley, and was able to move the team down the field for an 85-yard drive, capped by a touchdown pass to Rasheed Bailey in the final moments of the first half.

Barkley returned in the third quarter, but didn’t do much with his second run of the night.

Tebow finished the game by throwing another touchdown pass and cementing his spot on the team.

Eric Rowe Is Not Ready To Play

Third quarterback battle aside, the biggest thing I took from tonight’s game was just how far off second-round pick Eric Rowe is from contributing this year.

Rowe capped a very erratic preseason with another poor showing tonight. Rowe was slipping and sliding on the field at the Meadowlands, as he continued to give up big plays in the passing game.

Rowe has been getting burned regularly throughout the preseason games. He’s struggling to recognize the routes of opposing receivers, and guys are getting easy separation from him on most plays.

Based off of his showings this preseason, the Eagles can’t count on Rowe to play much of a role this season. He’s just not ready, and he needs time to develop before going onto the field. If he can’t fight off third and fourth stringers in the preseason, he’s not going to do the team much good in the regular season.

It once again begs the question, who is going to play the slot for this team?

Right now, it’s certainly not Rowe. Jaylen Watkins has had massive struggles with consistency of his own. E.J. Biggers may be the team’s safest option right now, but he’s far from ideal.

Plenty To Watch For In Eagles-Jets

I agree with you on Ed Reynolds…he cant tackle a lick. Eric Rowe is a safety I dont think he can play corner on this level effectively

That 2014 draft looks like a dumpster fire, Rowe isn’t a corner he’s a safety so they have probably wasted his rookie year, glad the preseason is over and please send Barkley to parts unknown. If we need a third QB the season is done anyway.

Eagles couldn’t score a touchdown from the 4 yard line off of a Jaylen Watkins interception.
Eagles are going to rue the day they released Trent Cole this season. Biggest off season mistake.

Eric Rowe looks awful. He and Marcus Smith both appear to be wasted high-round picks.
I think our secondary is going to struggle again this year. Getting rid of Boykin was a bad idea.
I think there’s a good chance we’ll have a different defensive coordinator next season.

Can’t cry over spilled milk…but the releasing of Boykins was a big deal…I’m seeing big plays against us from the slot every game. Also what bothered me was how the team couldn’t get off the field on 3rd downs…The Jets converted damn near every 3rd down chance they had. I know it was just preseason, but that’s a problem!

For the Record RT777
Eagles Didn’t Release Boykin, they Traded him to the Steelers for a 5th Round Pick in next Years Draft

Lesson to be Learned, don’t trade a veteran Player and count on Rookie Players at a Critical Position like CB (Shepard loss to Injury, Rowe simply not ready)

That’s correct they traded him…but to me they might as well have released him…a 5th round pick in next years draft? I look forward to seeing who we take with that pick and if that person has any impact in 2016…

That is a problem and its always seems to be b davis struggle is 3rd down….I cant tell you I got so pissed when we would give 3rd and long…..fuck u billy everytime

On a side note boykin and all of steelers seco,dary look horrible