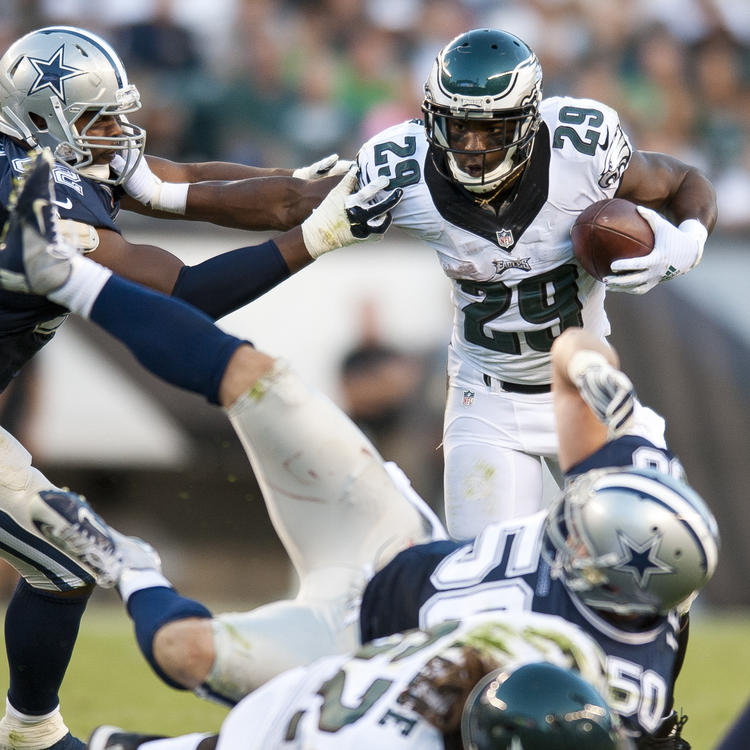 The Eagles are trying desperately to get their running game going, but their main ball carrier DeMarco Murray left practice today with a hamstring injury.  The severity of the injury hasn’t been made public, but we all know the Eagles can ill-afford to lose Murray for the upcoming battle against the Jets.

Murray has had a very difficult beginning of the season for the Eagles.  In the battle against the Cowboys his former team, Murray carried the ball 13 times for two yards.  Now, there’s a chance he could be sidelined.  Ironically, the guy he replaced LeSean McCoy has been battling hamstring injuries in Buffalo.

What do you expect??

This injury makes zero difference for the upcoming game against the Jets. Demarco and Mathews are not the problem; it’s our offensive line. When 2-3 defenders are already tackling you by the time you get the handoff, there’s no way to have a successful running game.

I agree 100% BTC24 for the Eagles won’t be running the ball much on the Jets regardless of who is in the backfield.. Bradford and possible Sanchez will end up with 45-50 Passes to the 15-20 total Running Plays so Ryan Matthews and Darren Sproles and probably a couple of Reverses by Huff/Barner mixed in as well …
The only Chance in this game is to Pass, Pass, Pass and hope to be very efficient and keep an up tempo pace and poop out that Jets Front 7 and then mix in some runs here and there when they are huffing and puffing..

As it relates to Josh Huff saying the Cowboys were yelling out the plays..Josh Huff tweets…I blew it out of portion. Whatever Chip says.
Chip must’ve laid into him for telling the truth. Chip is the ultimate control freak.

Was “I blew it out of portion. Whatever Chip says.” his exact tweet?

‘Cause that’s the shadiest of shady mea culpas. And speaks VOLUMES about how guys may be feeling about the Chipster.

ts, no, Huff actually said it, I saw it on the news, It was tweeted as if it was a retweet. A reporter told Huff that chip said that he asked Huff about the play signals being stolen, Chip said Huff said no. However Huff never said anything about stolen signals, he initially said some Dallas players was calling the plays from the sideline that the Eagles were going to run before the snap” When a reporter went back to Huff and said that Chip said he asked him and Huff said no, Huff responded “Whatever Chip says, I blew it out of proportion”. Huff appeared as if he was like whatever, he was not interested in discussing any further.

I can’t believe we are the laughing stock of the league.

This uptempo offense is killing the Eagles right now. They really need to consider running a conventional offense. Sam is getting no rhythm with his playmakers. We lack attitude and fight. I loved seeing Murray fired up last Sunday in our lost to the Cowboys. To bad no one else on this offense is like that.

teams that go 4-0 in preseason often have bad years and teams that are 0-4 often have a good year– they really shouldn’t even keep score in preseason because its really just practice– practice with a scoreboard– people always over react to preseason–
as for laughing stock- yes we look terrible- however ravens, saints, seahawks, eagles and colts all 0-2 all had decent odds to win SB preseason– seahawks were second favorite, eagles colts were tie at 3, saints i think were 8 and ravens 13… so its a wierd league– it happens all the time– that said i’ve not seen an eagles team look this bad in awhile.

Cigar you have been the only one that’s stayed positive. I will never turn my back on this team. I live in Dallas and fly out to Philly to catch a game once a year and I also watch them here in Dallas every time they come. I just pray for one more season where we reach a SB. That’s it. I never bought into Chip as I was a huge AR fan but I understand it’s business and a trendy league. I’m just tired of seeing a gimmicky offense. I rather be awful with a conventional team and a defensive scheme that fits our personnel then what chip is putting on the field now.

oh i was pissed during the dallas game- but really why whine and cry over an event that you have NO IMPACT ON!…

NFL website’s poll today:
Who has been the most disappointing free agent signing?
(Andre Johnson, Demarco Murray, Ndamukong Suh, and Byron Maxwell)
Murray is running away with 61% of the votes. Suh 18, Maxwell 11, Johnson 10.

Is DJax playing tonight? I remember seeing Cullen Jenkins on the Giants when they played the Cowboys week one. Any other former eagles in the game tonight?

D-Jax out tonight for another Week or so…

Odell just piped it up on breeland….lol…..migos