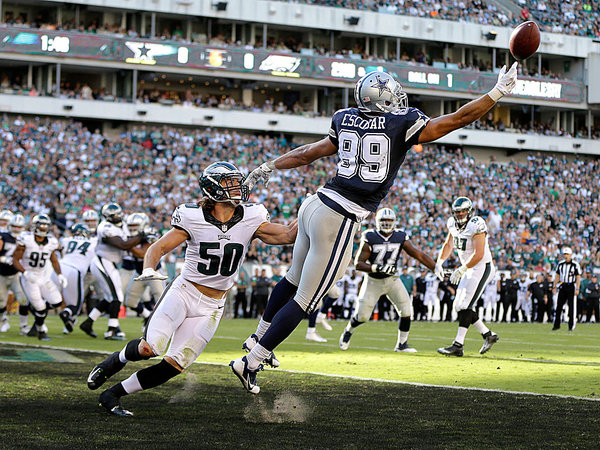 It doesn’t look like the Eagles are going to have either Kiko Alonso or Mychal Kendricks starting at inside linebacker for this game against the New York Jets.  Yesterday, they signed Najee Goode, who was released at the end of training camp, so he will step in behind DeMeco Ryans and rookie Jordan Hicks at the inside linebacker position.

There have been numerous reports that Alonso partially tore the ACL in his left knee on Sunday, and is out for the Jets game.   There’s a small chance that Kendricks, who strained a hamstring on Sunday, could play.

On the defensive line, defensive end Cedric Thornton is sidelined with a broken bone in his hand.   He’s going to be out two to three weeks.  Taylor Hart and Vinny Curry will step in for Thornton until he returns.

One of the reasons these injuries on the defensive side of the ball are so important, is because the Eagles offense is seriously struggling.  The Jets have one of the best defenses in the NFL and the Eagles are going to need their defense to play very well, in order to win this game.  It’s likely to be a low scoring contest.

The Jets are going to run the football and have quarterback Ryan Fitzpatrick manage the game by throwing short passes to Brandon Marshall and Eric Decker, two big wide receivers, who don’t have a great deal of speed.  Fitzpatrick will also be throwing short routes and screens to his running backs and Ryans and Hicks will have to cover them.  In other words, the Jets will be playing ball possession football.

I could see the Jets trying to get Ryans isolated on one of their running backs because, he doesn’t seem to be all the way back from the Achilles tendon tear he had a year ago.  On Sunday, the Cowboys went after Ryans at the goal line, but the veteran linebacker used great effort to break up the pass play.  Cowboys quarterback Tony Romo didn’t get enough zip on the pass to Jason Witten in the end zone and Ryans did a great job of not giving up on the play.  Still teams are going to target Ryans because he doesn’t seem to have the ability to change direction with explosion.

Hicks is a rookie, so you know they will target him because of his inexperience. I could see the Jets trying some misdirection plays, such as counters and bootlegs, on Hicks to get him out of position.  I’m sure Ryans has already told him about what to be looking for.

The Jets aren’t trying to score 30 points on the Eagles.  They know that 17 or 20 will probably be enough because they rely on their defense to not only stop teams, but also take the ball away and put them in good field position.

Eagles Offense Will Face A Major Challenge Versus The Jets