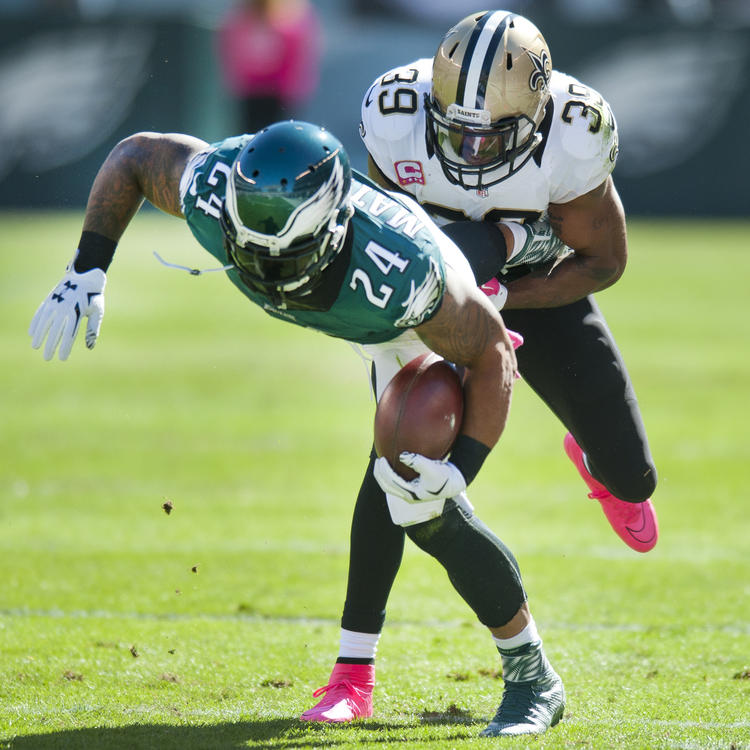 It’s always important that a head coach has the trust of his players from the standpoint that they believe he will always put the players on the field that BEST help the team to win.  Chip Kelly said he didn’t have enough data to decide which running back should be carrying the ball more often, DeMarco Murray or Ryan Mathews.  It’s going to be harder and harder to say that as we go deeper into the season.   So far when both backs have been healthy, Murray has been the running back he has chosen to give the football to, but that could change in the near future.

Anyone who has seen the Eagles play this season has noticed a difference in the effectiveness of the running backs and the difference is getting more and more glaring.  When Mathews is in the game, he explodes into and through the holes.  He runs aggressively and attacks the wannabe tacklers.  On Sunday, Mathews ran the ball like his hair was on fire.  He threw a couple of tacklers to the side with his hands and fought a few of them for more yardage.  There’s a violence to the way this young man runs with the football.

Murray on the other hand hasn’t been nearly as effective.  He looks slow getting to the line of scrimmage and his feet look heavy.  Surprisingly, he has been tackled by one defender too many times to mention this season.  Murray rarely makes a tackler miss and at times he has stumbled and fallen without being tackled.  Murray doesn’t appear to be the athlete that Mathews is.

The combination of Mathews’ size, speed and aggressiveness is definitely an eye-catcher.   He’s running the ball at a much faster speed than Murray.

They have been running behind the same offensive line this season and running the same plays.  Mathews makes things happen when he gets his hands on the football.  The blocking wasn’t great in the Jets game, but Mathews just ran through the tacklers’ arms despite the poor blocking.  Murray always seems to be a step late to the hole, if there is a hole to be found.

If ever there was a running back, who was a misfit for a line, it’s Murray with this Eagles line. If they give up penetration, he always seems to get tackled by that guy.  Despite the giving the ball to Murray 20 times on Sunday, it didn’t solve the problem because all it did was give Murray the chance to show everybody that he is struggling.

If things continue at this pace, I think Chip is going to have no choice but to put the ball in Mathews’ hands more than Murray.  They could try and mask it by saying that they’re just giving everybody a chance to carry the football.   Remember the teammates of both players have been seeing what we’ve all been seeing.