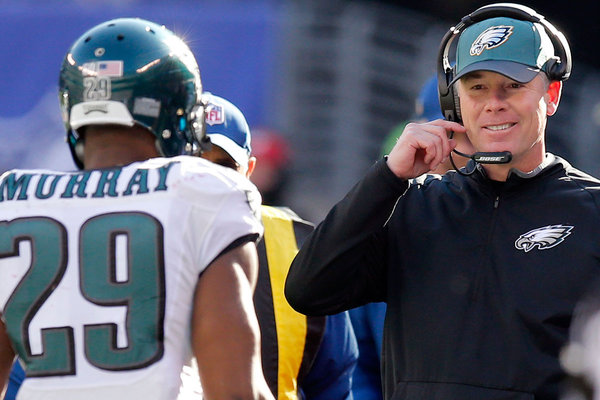 Chip Kelly may be out of the picture, but the painful shortsightedness that existed throughout his regime carried over for at least one more game.

With nothing to play for but a higher draft position and deciding key matchups next season, the Philadelphia Eagles predictably came out and played one of their best offensive games of the season, putting up 35 points in an effort to take down the New York Giants in the final game of the season.

Had the Eagles lost this game, they likely would have secured a top-10 pick. Unfortunately, the organization somehow felt there was more to gain by going all-out for one more win.

How did that mentality work out for the Eagles last season when they won the empty Week 17 finale against the Giants? Did that silly win carry over in any way to this season? Sure, it gave Chip Kelly the hollow right to claim that he had a 10-win season. But it pushed the Eagles farther down in the draft order, harming their ability to get closer to making a trade for the quarterback that they desperately needed.

Flash Of DeMarco Murray Offers Glimmer For Next Coach

On his first touch of the game, Murray took off for a 54-yard touchdown to give the Eagles an early lead.

Murray began the run from under center, and the downhill runner hit the hole provided for him quickly, and rumbled his way into the endzone.

Throughout the season, Kelly foolishly had Murray running slow-developing stretch plays out of the shotgun, which didn’t give the running back much of a chance to succeed.

Murray’s season in 2015 may turn out to be a blessing in disguise. Chip Kelly kindly decided to phase Murray out of the offense, greatly reducing the workload he took on. He can now serve as an attractive piece for the next head coach to build his offense around.

One of the only legitimate bright spots of the Eagles’ offense this season has been the play of tight end Zach Ertz.

Ertz has emerged as one of the team’s top weapons, finishing his season with a nine-catch effort for over 150 yards, including a 60-yard reception that set up the team’s first touchdown.

Chip Kelly may have torn down the offense, and stripped it of most of its talent, but Zach Ertz is one of the few legitimate building blocks that the next staff will have to work with.

Even though the Eagles hurt their draft position, and earned themselves a road game in Seattle next season, I can’t say I’m too bothered by today’s outcome.

The victory this week was the firing of Chip Kelly.

Jeffrey Lurie had enough foresight to recognize that the Eagles were a sinking ship under Chip Kelly, and that things weren’t going to get much better next season.

The 2015 season is mercifully at an end. Now the focus shifts to the coaching search, and the shape that the team will take as it transforms from the flawed vision of Kelly, to the image of the new head coach.