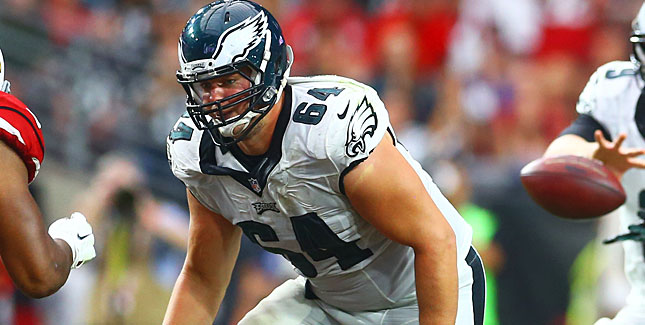 The Seattle Seahawks lost their starting left tackle for the season last week, and were in need of an experienced tackle. And so the Eagles dealt them a tackle with starting experience.

The Birds sent backup tackle Matt Tobin to Seattle for a fifth-round pick in 2018. The Eagles will also send Seattle their 2018 seventh-rounder.

To get any kind of compensation at all for Matt Tobin is an accomplishment, let alone a fifth-round pick. Howie actually managed to get more for Tobin than he did for Allen Barbre, who he dealt to Denver several weeks ago.

Tobin was a spare-part offensive lineman that was strictly a backup and nothing more. He had been given numerous opportunities to seize a starting role, and underwhelmed at every turn.

If Tobin is your depth then you are in trouble

They won’t miss Tobin. He was the third or fourth backup option at tackle. Vaitai was already ahead of him, Dillon Gordon had made strides as well…I think they would shift Seumalo out to tackle and start either Warmack or Wisnieski at guard before they played Tobin in the regular season.

There’s a million Matt Tobins floating around out there, its amazing that Howie turned him into a fifth-round pick.

Howie does it again.

We have a first, and three 4th round picks and 2 fifths. We also have Kendricks.

hopefully the starting 5 oline men stay healthy and not suspended – because that will be the key to success this year. D will keep them in games and the oline will dictate if Wentz gets the job done.

Just about any team that loses a starting tackle for a significant time will struggle.

Peterson said “maybe we do an injustice tour players …. but we are evaluating “… lol HAC said that when guys were jumping off the bridge wringing their hands over a preseason game