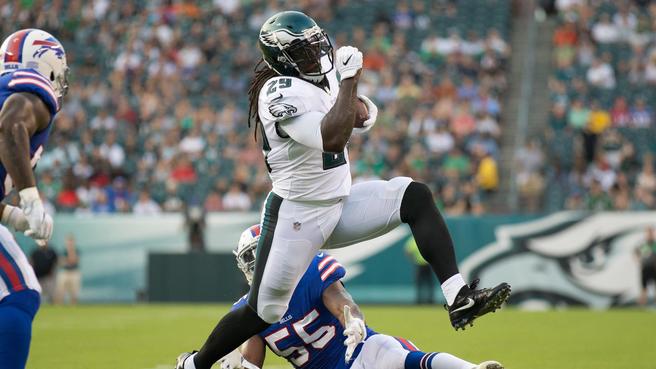 Over the weekend, Matt Lombardo of NJ Advance Media stated that it “wouldn’t be surprising” if veteran running back LeGarrette Blount is among the Eagles’ final cuts in the next few weeks.

The argument here would be that undrafted rookie free agent Corey Clement has caught the team’s attention in training camp and the preseason, and the club wants to make room for him. With Darren Sproles and Donnel Pumphrey locks to make the team, the decision would come to down to releasing either Blount or Wendell Smallwood.

I agree that Clement has made a very strong case for himself so far, but I’m not ready to go as far as to say that the Eagles could (or should) keep him over either Blount or Smallwood.

I think the concern about Blount is overblown. He’s only had a handful of carries in the first two preseason games, and most of them have come on stretch plays that just don’t suit his skillset. On the rare occasion that Blount has been asked to run up the middle, he’s been more effective.

I agree that Blount may not be an ideal fit for Doug Pederson’s offense but it’s hard for me to imagine the Eagles releasing Blount for several reasons. The largest of all is that they need an experienced back on the roster to help manage the ball in close situations. The team can’t run Sproles into the ground like they did a year ago. When the team is ahead late in a close game, they’ve to have a guy that they can feel good about giving the ball to. Blount is going to have to be that guy, short of the team making a move to bring in another more effective veteran.

If there’s a surprise cut among the running backs, I think its more likely to be Smallwood. The second-year man has got to get himself healthy and show what he can do on the field soon, or he’s in danger of the team making plans to move on without him.

Donnel Pumphrey’s presence is what’s really causing the Eagles an issue right now. Pumphrey has been far and away the least impressive of the team’s running backs through the first two games. He’s been billed as the next Darren Sproles, but he doesn’t look ready for the NFL and with Sproles on the roster for at least one more season, Pumphrey doesn’t seem to be destined to be more than a healthy scratch most of the season. They’re stuck, they’ve essentially committed two roster spots to the same type of player, and they’re going to have to let go of another guy that they would have kept any other year.

The team’s running back situation is most likely going to be less than ideal this year. The long-term answer at the position isn’t on the roster, and regardless of whether its Blount, Sproles, Smallwood, or Clement, the primary ballcarrier this year isn’t anything more than a stopgap.

Notes From The Phillies’ 5-2 Win Over San Francisco