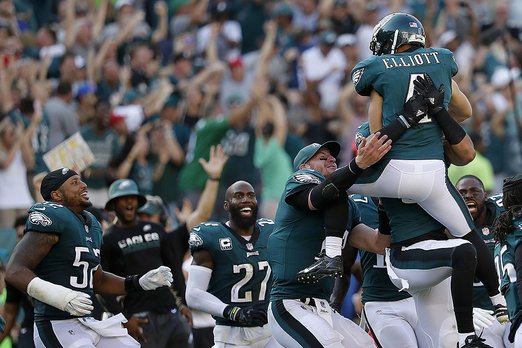 Oh boy, we have a lot to get in to with this one folks.

The Philadelphia Eagles blew a 14-point fourth quarter lead against the New York Giants, but fought back to take a 27-24 win in their home opener to improve to 2-1 on the season.

The Birds controlled the game for three quarters, winning a defensive struggle and establishing a 14-point lead going into the fourth. But defensive injuries began to catch up with the Eagles to open up some momentum for the Giants.

The Eagles went into the game missing Ronald Darby, Rodney McLeod, and Corey Graham, and lost two more key playmakers, Fletcher Cox and Jordan Hicks during the game. The hobbled defense finally caved, and the Giants rediscovered their rhythm.

New York put up 21 points within a five-minute stretch, part of their run was fueled by a terrible fumble from Zach Ertz, which set the Giants up with a short field.

However, the Eagles were able to rally themselves to tie the game at 21, and rookie kicker Jake Elliot was able to do the unthinkable, and nail a 61-yard kick to avoid overtime and give the team this crucial division win.

Doug Goes Back To The Run

A week after taking all kinds of criticism for his approach to playcalling and the run-pass ratio, Doug Pederson came back with a much more balanced offense, calling 31 passes to 35 runs.

LeGarrette Blount, Darren Sproles, Wendell Smallwood, and even rookie Corey Clement were featured in today’s game, and all performed at a high level.

Blount was fed 12 carries, and run exceptionally well, cruising for 67 yards and a touchdown. This was the first game that Pederson allowed Blount to get in a rhythm, and the big back really took over on the team’s first scoring drive in the second quarter. Blount arguably should have had even more touches, the way he was playing, he could have gone for over 100 yards today. He’s not done folks.

Smallwood was very impressive as well, picking up 71 yards on 12 carries of his own. He fought hard for extra yards, and gave the offense some badly needed pop in the second half. Even on the team’s second to last drive, Smallwood had several big runs to get them deep into New York territory.

Clement was used a surprising amount in the second half, and was given some pretty critical carries, including a one on a 15-yard touchdown run to tie the game at 21 in the fourth quarter.

What’s the easiest way to get to the playoffs?

Take care of games within the division.

So far, so good, the Eagles are 2-0 against the NFC East.

Oh, and look at what happens when you have a balanced offense? The Giants have a tough secondary, with Jenkins, DRC, and Landon Collins. Imagine if Pederson had come out and called 50+ passing plays for Wentz in a close game like he did last week in Kansas City? You’d probably be looking at a different result today.

We’d go through this run-pass ratio discussion to the point of nausea in the Andy Reid era. Andy would lose a game with imbalance in the playcalling, find religion and run the ball for a few weeks, and then the passaholic would eventually come back out.

Let’s hope Doug is different in that regard, and we’ll see balance like this moving forward.