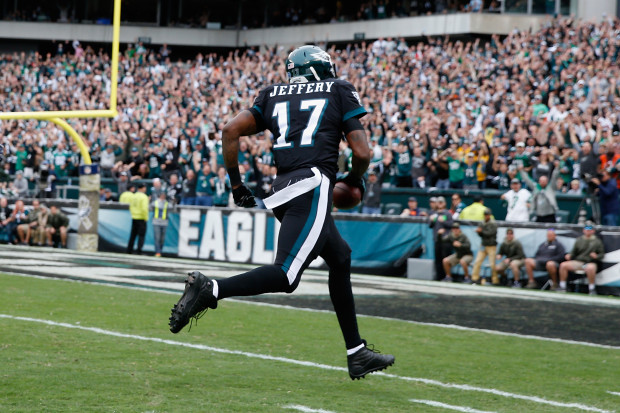 PHILADELPHIA, PA – NOVEMBER 05: Wide receiver Alshon Jeffery #17 of the Philadelphia Eagles runs in a touchdown the Denver Broncos during the first quarter at Lincoln Financial Field on November 5, 2017 in Philadelphia, Pennsylvania. (Photo by Joe Robbins/Getty Images)

Eagles Manhandle Denver To Go To 8-1

The Philadelphia Eagles looked like a powerhouse in today’s 51-point thrashing of the Denver Broncos, improving to 8-1 as they go into the bye week.

Facing the vaunted Denver defense, famous for their “No-Fly Zone” secondary, Carson Wentz and the Eagles’ offense came out and moved the ball at will, putting up over 400 yards, 51 points, and didn’t commit a single turnover.

This is a Denver defense that just two years ago anchored that team to a Super Bowl victory. And here, second-year quarterback Carson Wentz just picked them apart. Oh, and he did so while playing without his favorite target, Zach Ertz, who missed today’s game with a hamstring injury.

Wentz began the day by answering an early Denver field goal by floating a picture-perfect pass to Alshon Jeffery for a 32-yard strike to get the Eagles on the board.

Wentz delivered another beautiful throw in the second quarter to hit Trey Burton for a 27-yard touchdown to put the team up 24-6.

Wentz finished with under 200 yards, but tossed four touchdowns on the day, and the way he was performing, that yardage total could have easily been higher if it needed to be.

The quarterback play we’re seeing from Wentz is just on another level. More and more, he’s looking a true MVP candidate with each passing week. You watch him play, and it’s so hard to believe that this is a guy with just 25 NFL games to his name.

At 8-1, the Eagles continue to sit alone at the top of the NFL.

With the Seattle Seahawks taking a loss at the hands of the Redskins, the Birds gained valuable ground in the race for home field.

The team now gets a valuable bye to rest up, to get Jay Ajayi more acclimated with the offense, and to prepare for a showdown with the Dallas Cowboys, where the Eagles could potentially put the final nail in the NFC East coffin.

These are great times to follow this team, let’s enjoy and savor every moment.

Sixers’ Week In Review: Above .500 For First Time In Four Years