The Sixers Path To The NBA Finals Is Wide Open 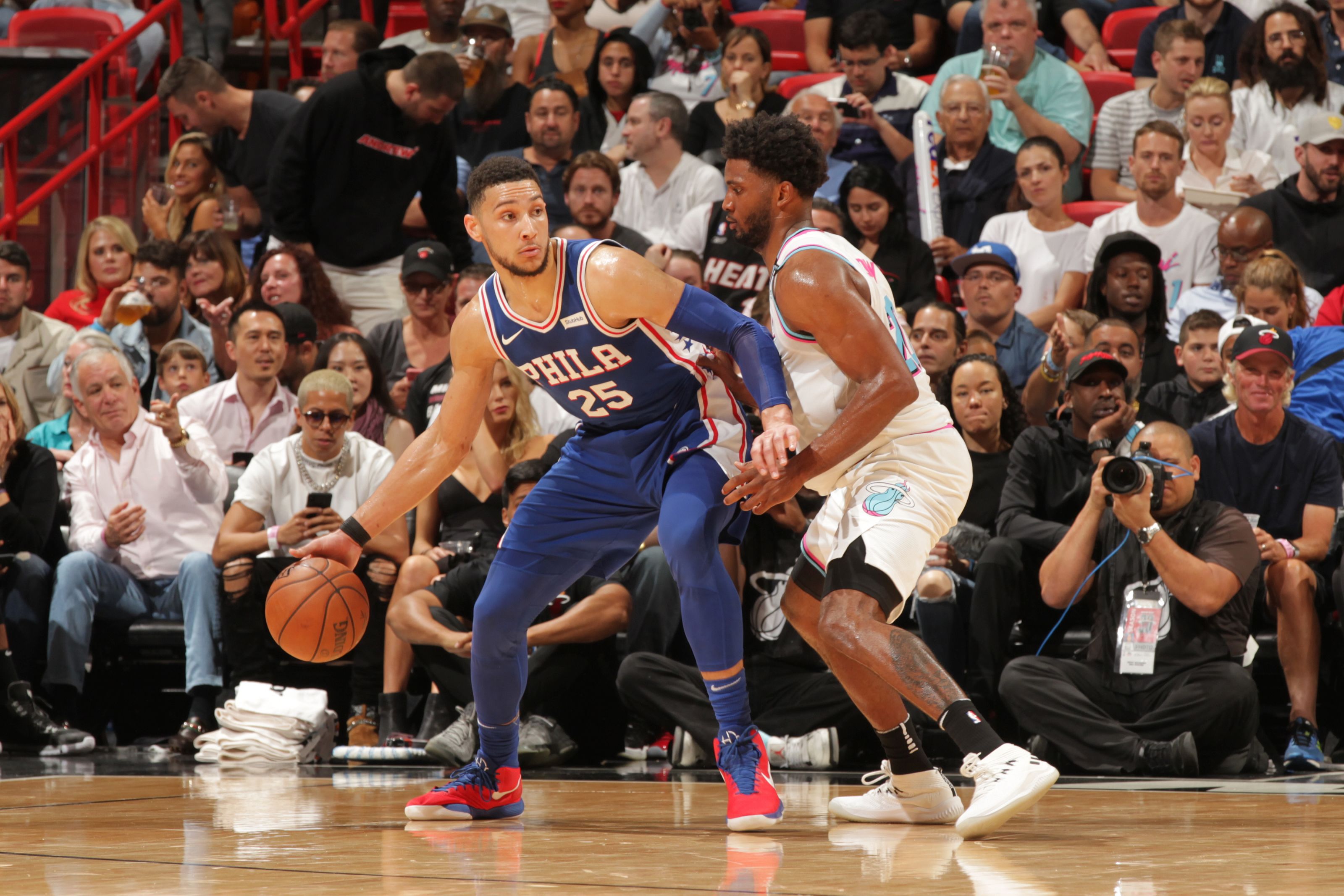 MIAMI, FL – FEBRUARY 27: Ben Simmons #25 of the Philadelphia 76ers handles the ball against the Miami Heat on February 27, 2018 at American Airlines Arena in Miami, Florida. NOTE TO USER: User expressly acknowledges and agrees that, by downloading and or using this Photograph, user is consenting to the terms and conditions of the Getty Images License Agreement. Mandatory Copyright Notice: Copyright 2018 NBAE (Photo by Oscar Baldizon/NBAE via Getty Images)

We knew it was going to happen, but nobody expected the Philadelphia 76ers to be going to the NBA Finals in 2018, but it’s definitely possible as I look at the way the Eastern Conference playoffs at the moment. I’m not awed by LeBron James and the Cleveland Cavaliers or the Toronto Raptors or the Boston Celtics because the Sixers can beat all of them.

The Cavs are stumbling all over themselves in their series against the Pacers, which is all tied up at two games a piece.  Cleveland had a 16 point lead in the first half and barely made it out of Indiana with a victory in game four.  The Celtics, who are without Kyrie Irving are nothing to write home about and they couldn’t hold off this Milawuakee squad, so the series is all tied up at two apiece. The Raptors blew a 14 point lead and let the Washington Wizards tie their series up at two.  The Sixers are only team that is up 3-1 in their best of seven series.

I also like the fact that they got Joel Embiid back on the court as soon as possible because he needs some time to get his body ready for playing an entire game.  Once he gets back into the groove, the Sixers are my favorite to be the last team standing from the Eastern Conference.  They can win some games without Embiid, but they need him playing like he is capable of playing in order to go to the Finals.  In other words, they need the dominant Embiid in order to get out of the East.

I can’t say enough about how much I am impressed by the play of Ben Simmons.  His ability to get the basket when he wants to and his ability to distribute the basketball is amazing.  There’s no question that once he develops a consistent jumper, he will be unstoppable.  His athletic ability is underestimated.  He’s got to be one of the fastest players in the NBA and you can’t forget that he’s 6’10”.  You’re not supposed to be that athletic at 6 foot ten inches.

Once the Sixers get to the NBA Finals, there’s no telling what can happen.  At this point, I don’t think they’re going to win it all, but once they get there, you never know.  A trip to the NBA Finals would be great experience for this young squad.  The rest of the NBA knows that they’re “A Monster Growing In Philadelphia!!!!

The Eagles Will Be Trusting In Romance With The 32nd Pick

Garry ,when did you switch from a sports site to a quasi- political ste? cant figure why these bozos who write political slop think they are enthralling us with their slop. I miss P aulman ,ct mhenski ,gm cliff , and a guy I used to argue with . cant remember his name,but even if Howeird Eskin 24/7 droning on bout how great. he is would be better than the bozo parade of slop like the guy who calls himself donald treason.How a bout thinking on it for awhile ok Garry ok ?

Have a cigar , I forgot your name for a bit, bro, how have you been? Well I hope.,what do you think of the Eagles draft ?