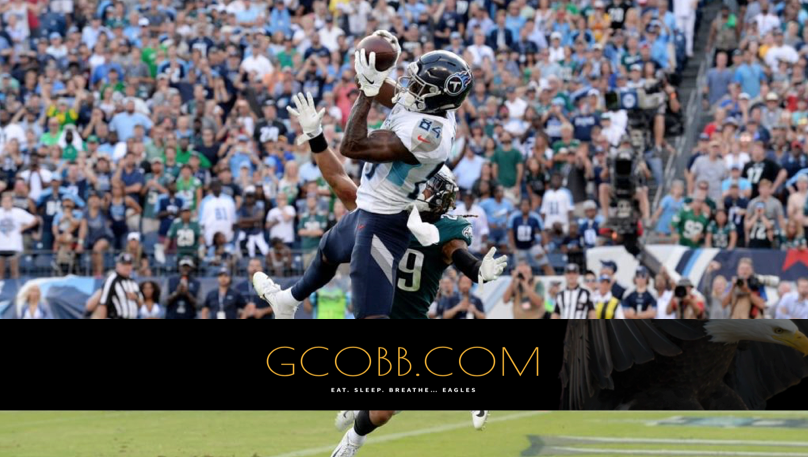 The red zone defense couldn’t save the Eagles this time.  Yes, the Birds have been doing a great job of keeping teams out of the end zone, but they need to start improving on stopping them in between the twenty-yard lines.  If you continue to let offenses march up and down the field and get inside the red zone — eventually they’re going to score.

Don’t get me wrong, playing defense in the NFL is very difficult nowadays.  Regardless of how good you are, you’re going to be beaten at times, but there’s no excuse for blowing assignments in man-to-man coverages or not being aware of where receivers are when you’re dropping in zone coverages.

“The Eagles pass defense gave up 344 passing to

Tennessee and that does’t include the drop by Jennings…”

The defensive line, which is supposed to be one of the best in football, needs to show up when the game is on the line.  You can’t absent when the secondary is being shredded.  That last drive by the Titans was ridiculous because of all the mistakes the Eagles defense made along the way.  They let them march for the touchdown despite Darius Jennings dropping that deep pass.

The Eagles pass defense gave up 344 passing to Tennessee and that does’t include the drop by Jennings, the overthrows by Marcus Mariota to a number of wide open deep receivers.  The Titans could have had 500 yards of passing offense against the Birds’ defense.  That’s ridiculous against a Tennessee ball club which came into the game without any passing attack because they were averaging only 160 yards per game.

No doubt about it — the lost to the Titans was very painful. It is a loss that will stick with this team for a while because the game was there to be had.  They’ve got to go to work at practice and work together in order to develop the ability as a group to capture and put that game away.

It means everybody having a talk with the man in the mirror.  The amazing competition in the National Football League forces players and coaches to have a talk with the man-in-the-mirror.  You are forced to ask him if you are doing everything you can to get better.  Are you focusing enough in the meetings and in your film study?  Do you understand the coverages well enough to execute them?  Are you executing your technique properly when covering a receiver?

march down the field with Mariota leading the way…”

How does veteran safety Corey Graham drop back on fourth and 15 and let Taiwan Taylor catch a pass on the sideline when Taylor was the only receiver in his area?  I could have coached a grade schooler to do a better job than Graham did on that play.  He’s got to look him up and slide in his direction.  You can’t just guard open grass, you have to find out where the receivers are and move close to them.  That’s inexcusable for a veteran player to make that type of mistake.

No way in the world were the Titans supposed to be able to march down the field with Mariota leading the way and be able to beat the Eagles with the game on the line. It shouldn’t have happened but it did happen, so we need to look at some of the other reasons why.

First of all the Eagles have got to look at the play of the corners. In fact they need to look at the entire defense, including their vaunted pass rush which was missing in most of the second half. It’s very clear that the Eagles corners aren’t playing with confidence.  You can’t succeed in playing this game if you’re scared.

I think cornerbacks Jalen Mills and Ronald Darby are capable of playing much better, but this must get worked out soon.  Defensive coordinator Jim Schwartz has to mix up the coverages and keep the quarterbacks guessing.  He should have Mills, Darby and Sidney Jones jamming the receivers more often when they move up on them at the line of scrimmage.

Everybody gets beaten in this league.  You know the amazing thing about the NFL, is that it can have you sitting on top one week but on the bottom of it all in the next .  This happens week after week and year after year.

We were focusing on the play of the Eagles defense in the red zone and yes their play in the red zone has been outstanding for most of the season, but the truth is that they haven’t been able to stop anybody outside of the red zone.   Offenses have been marching up and down the field on them.

They have got to mix things up in their alignments, blitzes, and coverages, but everybody has to know their assignments.  You can’t allow 6’3″  210 pound Corey Davis to get matched up on 5’10” 185 pound Avonte Maddox.  At some point, somebody should have moved the little cornerback to one of the other receivers.

I don’t understand why the Eagles don’t jam receivers more when they move up near the line of scrimmage.  If you’re not going to jam the receivers and delay his release, it makes no sense to move up there.  I’ve always found jamming receivers in the first five yards to be very effective because it throws off the timing of the receiver and the quarterback.  Many times if the quarterback sees you jamming a receiver, he will look to his other receivers because he gives up.

The Eagles cornerbacks, safeties and linebackers should jam receivers more often.  They don’t have to do it all the time, but jamming receivers would make them more effective because it would work well with a good pass rush.

The Leadership Skills Of Carson Wentz Made A Difference