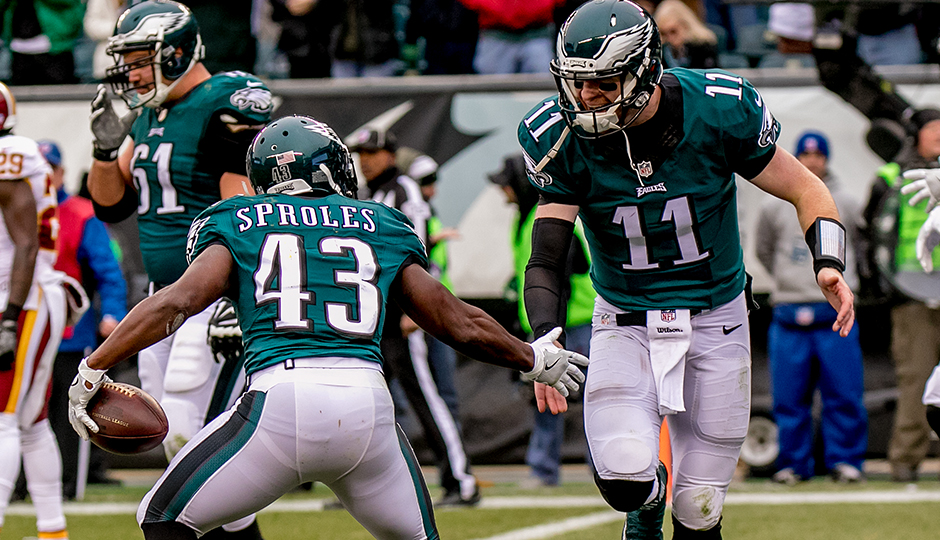 I know the Eagles were watching those games yesterday especially the battle between the Los Angeles Rams and the New Orleans Saints.  After looking at that game, they know they have to step it up if they’re going to get above .500, make the playoffs, or get any where near close to returning to the Super Bowl.  Both of those teams have explosive offenses and they can seriously put points on the board.  Now that we have closely viewed those teams, let’s take a look at what situation the Eagles are in.

I’m definitely excited about the fact that the Eagles are going to be adding two of the most accomplished third-down players or third down targets in the history of the NFL.  They will be adding them to their offense at the midway point in the season.  Of course, one of the guys I’m talking about is wide receiver Golden Tate.  Tate was brought in here specifically for third downs.   Tate is a great slot receiver, who gets open, breaks tackles and gets first downs.

The other guy that they will be adding to the offense, hopefully soon is that little guy by the name of Darren Sproles.  Despite the success that the young running backs have had, they still need Darren Sproles out there on third down.  He is lethal on screens, draws and option routes.  The presence of Zach Ertz and Alshon Jeffery along with Tate will make it impossible for defenses to double Sproles.   They will have to pick their poison.

We all know what Sproles can do.  We know about his quickness, his strength, his toughness and his focus.  You can believe that Golden Tate has many of the same qualities. As you can see both of them are relatively short.  They’re quick.  They are built like rocks and that’s why they’re able to break tackles, carry tacklers twice their size for the extra yards.  That’s why they are two of the most accomplished third down targets in NFL history.

We need them to add to their NFL accomplishments because things are wide open in the NFC East.  If you saw the Washington Redskins in action yesterday, you know that the NFC East is wide open.  If a team can put points on the board it can beat the Redskins because they can’t run with the Big Dogs. They just cannot because they got a limited offense.  All you have to do is stop Adrian Peterson.

They’re done with Alex Smith at the quarterback position.  He is nothing but a “Check Down Charlie” quarterback.   The NFC East is wide open it’s as simple as that.  If the Eagles score like they’re capable they will run over the Redskins like an eighteen wheeler running over a bug on the highway.  The Redskins are led by “Check Down Charlie” and he lost his job in San Francisco and in Kansas City because he won’t throw the ball downfield.  He’ll eventually lose his job again, if the Eagles offense plays the way they’re capable of playing.

Carson Wentz was the top third down quarterback in the NFL last year, the addition of Tate and Sproles will hopefully lift him back up there to the top.  If it does, there’s no telling what the defending champions can do this season.

The Door Is Wide Open For The Eagles, But…..