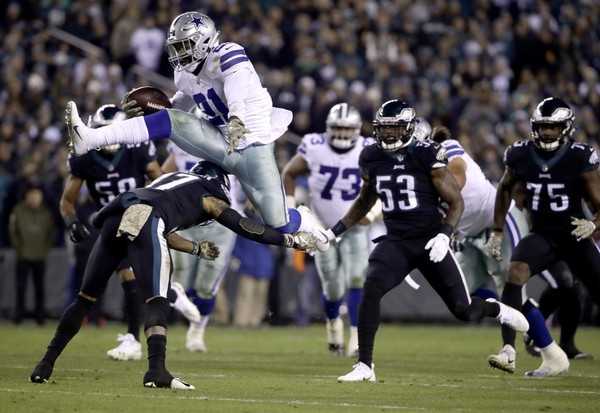 You never would have guessed that the Philadelphia Eagles had two weeks to prepare for this critical game against the Dallas Cowboys.

The Eagles sleepwalked their way through the first half, generating just three lousy points, and were unable to take advantage of opportunities given to them in the second half, and allowed a mediocre Dallas team to come into Philadelphia on a short week and pull off an upset.

Just think about this for a minute. The talk leading up to this game during the week was that this could be the game that Jason Garrett gets fired. Cowboys fans spent the week lamenting the fact that Dak Prescott is their quarterback, and by the end of this night were gloating again about their lousy team coming to town and taking down the shell of the of the Super Bowl Champions.

Doug Pederson’s Staff Has Done A Terrible Job This Year

There are good players in place here. But for some reason, things just haven’t clicked the way they did in 2017.

I think it starts with coaching. Playcalling has completely lacked creativity on offense, and has been utterly without common sense on defense.

I think Mike Groh has done a lousy job in his first as year as offensive coordinator. Last year, when you look at the 2017 roster, everyone on the offense had a role. Whether it was Alshon Jeffery or Kenjon Barner, almost every skill position player on the roster had some kind of role, some kind of package that they could be deployed in to help this team.

Now? This offense runs exclusively from Carson Wentz to either Alshon or Zach Ertz. Maybe a Nelson Agholor or Jordan Matthews works their way in every now and again, but that’s it. It’s been frustrating seeing talented guys like Dallas Goedert disappear for weeks at a time. I’ve been scratching my head all year wondering why a guy like Shelton Gibson makes a great play down the field against the Minnesota Vikings, and then vanishes from the face of the Earth, never to be seen again on an offense that could use a deep threat.

I know the Eagles don’t have a lot of talent at the running back position, but Groh’s running schemes have looked stale and predictable throughout the year.

And let’s not get started on Jim Schwartz. I’ve never seen a defense routinely give up 3rd and longs and 4th and longs like this unit does. At the end of the second half, when Dallas was faced with a 3rd and 15, I had a sinking feeling that the defense was going to give it up. And sure enough, they found a way. Also, a defense that used to pride itself on stopping the run can’t even do that any more, as Ezekial Elliot gashed them for well over 100 yards and multiple scores on the night.

Everyone deserves a share of the blame for the way things have gone this year, but Groh and Schwartz are right at the top of my list at the roots of this team’s issues.

It’s an extremely difficult road for the Eagles from here on out.

They had such a slim margin for error the rest of the season, and lost a great deal of it tonight. The one thing that this team absolutely had to from here on out was dominate the division games. They let down again tonight.

The patterns in this team’s losses have all been the same. The Tennessee game, the Minnesota game, the Carolina game, and now tonight. From all of these games, you really come away with the same bad taste. And that taste tells you that this isn’t a good football team.

Three straight home losses for this group. That’s completely unacceptable, and that’s a surefire way to take your team out of the playoff picture.

This team has already lost five games. They have an extremely difficult matchup on the road with the Saints next week. They also have a date with the Rams later in the season.

Even in a best-case scenario, it could be difficult for this team to get to 9-7. With the Redskins already sitting with six wins, that’s going to make it rough to even win this division.

The season isn’t over, but the Eagles have dug themselves one hell of a hole.

Meet Me In Spring Lake, New Jersey Today from 1pm to 3pm