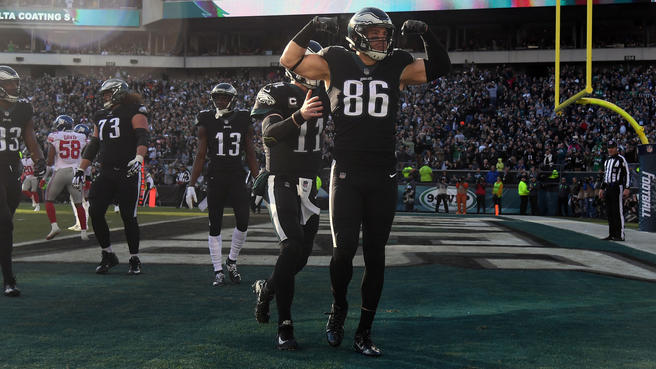 Eagles tight end Zach Ertz continued his assault on the National Football League record books as he caught seven passes for 91 yards and a touchdown yesterday in the Eagles 25-22 win over the New York Giants at Lincoln Financial Field.  Ertz continued to be Carson Wentz’ number one receiver by far.   He has been getting open and getting it done all year, as he continued at this historic pace of catching passes.

The former Stanford Cardinal tight end pulled in 7 passes for 91 yards in what was a usual day at work for the Eagles pass catcher.  He pulled down a key pass in the battle with the Giants on the seven yard line and carried a couple of the Giants’ defenders into the end zone for a score.

Ertz has just been impossible to stop, as he finds a way to maneuver between linebackers and safeties to get open to catch the football.  He was targeted eight times by Wentz and in seven of those targets, they were successful.  I know there may be times during the game when you say, “Do the Eagles have any other receivers?”  Yes they do, but their best receiver wears number 86.

The level he is playing at is amazing.  Ertz has caught a total of 84 passes for 895 yards with 6 of those catching going for touchdowns.  Consistency has been the key for Ertz.  Only ten of his catches have been for over 20 yards, but most of his catches are around 10 to 15 yards.  His catch average is exactly 10.7 yards per grab.

The most astonishing stat that I see amongst the Ertz accomplishments is the fact that he has caught 48 passes for first downs.   That’s really where Zach really gets it done is he is a first down machine.  He helps keep the Eagles offense on the field, so they can wear out the opposing defense and continue the ball possession.  That’s what happened to the Giants defense in the second half of the football game.

He has an amazing ability to get open and catch the football, even if the opposing defense knows the pass is coming his way.  If the ball hits his hands he will usually come down with it.  Ertz is definitely the best past catching tight end in the NFL right now, along with Travis Kelce.

With five games remaining on the schedule, Ertz has caught 84 passes for 895 yards and six touchdowns.   Right now he’s the Eagles most outstanding player on the roster this year.  If he can stay healthy and continue at this pace, he will break the record for number of passes caught by a tight end in a single season in the history of the league.  The record is 110 catches and it’s held by former Dallas Cowboys Jason Witten.  Ertz is on a pace to shatter the record.  The yardage record for a tight end is about 1300 and held by New England’s Rob Gronkowski.  Ertz has got an outside chance at that record as well.

He just needs 27 catches in those five games and he will own the tight end catch record.  He’s been going on a much higher pace.  he continues to do at this rate in addition arts as a as an pool does blocking but you know he does is magic when he’s out running passes the running and catching passes out from Carson Wentz and

The thing about the Wentz-Ertz connection is that Carson seems so comfortable throwing the ball to Ertz.  Wentz knows when and where Ertz is going to take the route.   He knows when he’s going to make his cut and therefore he lets the ball go early for Ertz.  They make it look so easy to connect for completions.

Man plans to ride out Hurricane Florence a ride Hurricane

The Eagles Found A Way