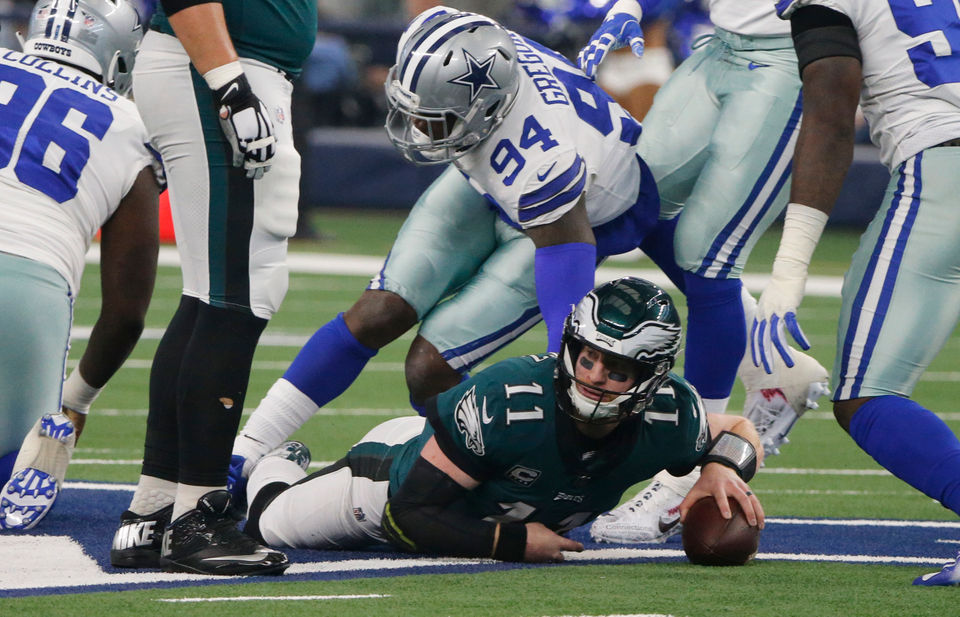 Carson Wentz seems like he’s really pressing, especially at the start of these games and it’s a cause for concern.  I understand that he’s a ‘take charge’ type of guy, but he desperately needs to let things come to him as he did last year.  There are several reasons why I think he’s doing this, and some reasons are direct and some indirect.

“Not having Ertz available is a confidence killer for Wentz and this indirectly causes him to press too much in some parts of the game.”

Carson has tremendous trust in Zach Ertz and it’s understandable.  Ertz is nearly always open and he consistently catches the football.  But Wentz must gain more confidence in the other receivers and not use Ertz as a crutch.  When the Cowboys took away Ertz by double teaming him and putting Byron Jones on him, Wentz had to start throwing the ball to other receivers.  Let’s just say, it took a while for him to make the adjustment.

He’s got to push himself and the other receivers to step up their game, that way he will be able to comfortably throw them the football quickly after the snap.  Clearly Dallas Goedert has learned a great deal from Ertz, and he runs the same type of precise routes that gives Wentz the confidence to let go of the football.  Wentz also seemed to be developing this with Golden Tate as well — which is great.  But at this point in the season, these relationships need to be more established.  Not having Ertz available is a confidence killer for Wentz and this indirectly causes him to press too much in some parts of the game.

“The fact is that Wentz didn’t take this team to the Super Bowl, but he did put them in position to go.  He’s good enough to take them to multiple Super Bowls in the future, but he’s got to stop pressing.”

What do I mean by pressing?  Lately, Wentz won’t give up on a play and throw the ball away, even when he knows it’s the thing he should do.  He continues to try to make something out of nothing which inevitably leads to mistakes.   Wentz will impatiently try to takeoff and run too soon without giving his receivers a chance to get open and he’s been playing every down as if it’s third and long in the first halves of these games.  Luckily, as he gets into the game and he sees that the pressing isn’t working, he relaxes and starts playing like we know he can.  But this is not a good formula if the Eagles want to save what is left of the season.

The last area I want to touch on may be the most important.  Wentz has got to work on his fundamentals.  Too many times, he doesn’t set his feet and throw the ball properly.   Throwing the football without establishing your balance and things like holding the ball with one hand are just asking for mistakes.   I notice these things happen when he’s tense and trying to make a play when there isn’t one.

So there you have it, a heavy reliance on one receiver, some discomfort about the Super Bowl last year, trying to do too much on every down and shaky fundamentals.  This is what Wentz has to deal with to take this team to the next level and I think he can do it.

Another Painful Loss To The Cowboys

G; youre adressing early on in games that 11 is pressing. Youd be pressing too if given those scripted plays. Coach shoulders culpability, a qb can get into a rythym and look like hes sharing the ball, becsuse hes slinging it, confident the scheme is creating mismatches. The loss of Sproles for a great extent and reliance on smallwood as Ajayi went down , is something howie needed to remedy. The whole organization , top to bottom has had complacency, permeate their bloated self worth. Guys like 11 are truly gifted, i dont believe he has foles envy. Not for a minute. Hes not wired that way. Its more apparent as denny said they rushed him back. The injuries to the backfield was impactful , the fact that dallas gave a one for cooper vs a 3 for tate is clearly impactful. The eagles gave up 500 yds , and twice the possession time, that makes one press. The score in this game for three quarters allowed the run game to develop , loosening up the other teams defense. We were outcoached and at qb one qb had a chance to execute where 11 was consistently chasing 7 pt defecits. The coach and schwartz need mirror up.

He did pick it up in the 4th when the game was on the line. I believe he would have drove the field and won the game

The defense collapsed in the end

But Wentz was scanning the field. Going through the progressions. He settled down and looked calm and confident as if he figured Dallas defense out

This is a very late comment but it has to do with Carson Wentz pressing.

I’ve been hearing over and over in the media, by sports journalists and former players turned talking heads, that they believe the ceiling on Wentz is just so much higher than Foles. Nick Foles’ ceiling is very high. It seems that every time he steps on the field he is setting new records that have stood the test of time. With his teammates building a shrine, Fletcher Cox saying “Thank God for Nick Foles” and everyone expecting him to top that – it must be a weight that is so heavy on him.

Then there was the weight of him trying to prove that he was deserving of the MVP title. I want to point out that in 2017, our schedule was insanely easy and Wentz was incredible against teams that were less than .500. But against teams with a winning record, he lost. And that transferred over to this year, when our teams were much harder than 2017’s.

I do believe the Eagles have to let go of Wentz. Nick Foles has just made too much an impact in Philadelphia. Foles is to Philadelphia what Montanna has been to San Fran. That shadow is heavy and it’s too much for this kid.