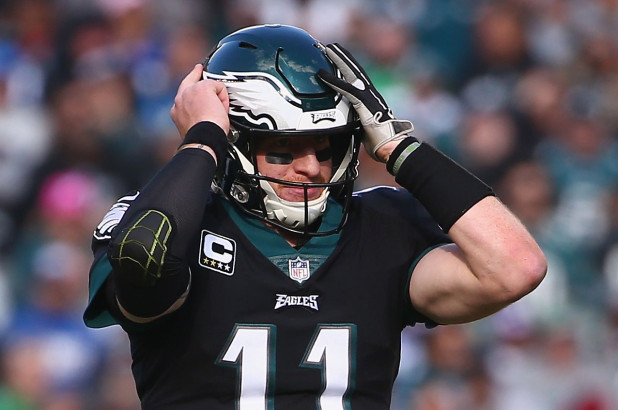 “The news seemed to just come out of nowhere and so now all the rumors start.”

There was no talk of him being injured after the Cowboys game on Sunday.  I guess this all occurred gradually.  It seems like on Monday or Tuesday they began to realize that he may not be able to play.

The news seemed to just come out of nowhere and so now all the rumors start.  Doug Pederson said yesterday that Carson Wentz was having back spasms.  He said he was having tightness in his back and that has been somewhat of an issue.  But nevertheless, he claimed it was not something that was major.  Pederson said that while acknowledging the fact that Carson wasn’t going to practice today.

I think that’s rather shocking that the news just seemed to come out of left field.  All of a sudden Carson wasn’t practicing.  So going forward, Nick Foles will likely be the starter on Sunday against the Rams.  Of course, we all remembered that last year in Los Angeles; Carson Wentz suffered the knee injury that sidelined him for the rest of the season.  Foles came in and helped the Birds win that game, then went on to lead this team to their first Super Bowl title. Foles was the Super Bowl MVP.

“Is it time to start calling Wentz an injury-prone quarterback?”

Just listening to people on the radio today was wild.  You’ve got Nick Foles fans calling and they’re stoking the fire.   They’re talking about Foles finally getting back in there as the starter.   It was something that they were hoping for all along.  They will be rooting for him and hoping that everything goes well. I heard some people saying they were not going to root for Nick because they didn’t want all the controversy.  Most of the fans still think Carson is the better quarterback, but they didn’t want to diminish what Foles accomplished last year.

Is it time to start calling Wentz an injury-prone quarterback?  If he’s injury-prone does it make sense to give him a five year deal more than $25 million per year?  Can the guy stay healthy?  With the way he has been playing, is he really an elite quarterback?  These are the questions that must be answered about Carson Wentz.

I have been reading this blog for at least a decade never had a chance to comment or didn’t feel the need to until now. We need to slow down with this talk of Carson Wentz not being elite. The guy had an MVP season cut short to a hit that was on at the knees by two defenders. The team should have not rush him back. Yes his fundamentals have regressed but I fee it’s attributed to not being 100%. We need to look at all the injuries. We virtually have no running game whatsoever. We have to get creative in order to rush the ball. The receivers lack the ability to get separation on a consistent basis. The Golden Tate additional back fired. Ertz is the only constant on this receiving corp. Defense…Defense has held on for dear life but when the time of possession is double in favor of the other team the offensive rhythm will not be there. There has been to many factors (not excuses) as to why this season has been a disaster for a super bowl team. Wentz’s only fault is that he has pressed because he knows all the glaring needs we have as a team. Please stop the talk of Wentz not being elite and enjoy having a 5 star QB finally. We need a running back and top tier cornerback this offseason. No more picking a corner or running back in the late rounds and saying he’s good enough.

yes he is injury prone. eagles should trade him to the panthers so he can be closer to where he was born

Hello Cliff and Hope all is Well for you and Your family, Somebody is using my Sign-On again !! (Probably G-Man Himself) Ha

Seriously ; so many issues far exceed the worth of 11. Lets stress that the front office dropped the ball by not adressing a need. Golden tate vs coopers value to their respective teams; has been the glaring difference. Howie had no 2018 magic. Coach had scripted plays that were abysmal,smallwood was our feature back , guys off the street played corner , and the O line aged like redwoods in the forrest. Remember this squad played a full sked in winning the supe, and traveled to london and played a first place schedule. playing still 3 meaningful games in dec. imagine if the st nick miracle happens. Now youd have a real qb controversy. Merry xmas To all my homies

Thanks for shaing this information.Have shared this link with others keep posting such information..

I together with my buddies happened to be digesting the best helpful hints found on the blog and so instantly I got a terrible suspicion I never expressed respect to the web blog owner for those strategies. All the women appeared to be for this reason thrilled to study all of them and have in effect extremely been tapping into these things. Thank you for simply being simply considerate and then for getting this form of amazing useful guides millions of individuals are really eager to be informed on. My sincere apologies for not saying thanks to you earlier.

that is the end of this write-up. Here youll uncover some web sites that we feel you will enjoy, just click the links over