Should the Eagles move up to draft a WR? 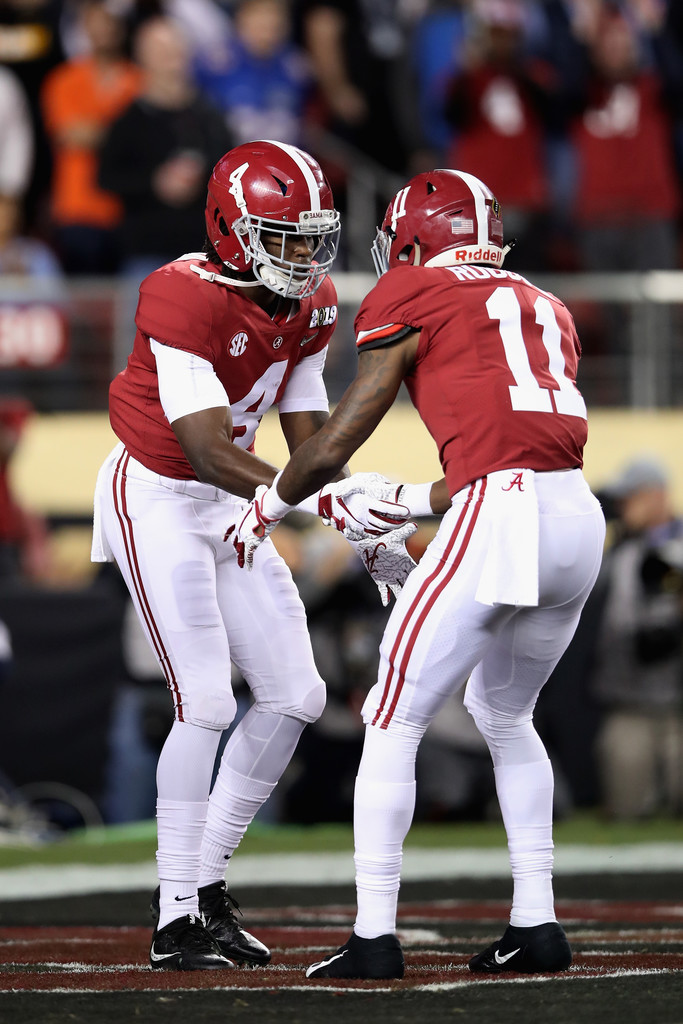 There’s no secret that the Eagles need a top-tier WR to pair with their franchise QB. This upcoming NFL draft should be the answer to their prayers. Alshon Jeffery will be entering his age 30 season and will be coming off Lisfranc surgery from December. DeSean Jackson is 33 years old and only played 5 quarters last year after having sports hernia surgery. Nelson Agholor is gone after a struggle filled tenure with the birds. Their second round pick from a year ago, JJ Arcega-Whiteside, couldn’t get on the field early in the season, and when he did he struggled to catch the ball. The lone bright spot came from Greg Ward. Ward, a former college QB from Houston, was an immediate spark to the Eagles offense. After being called up from the practice squad for good in November, Ward became a reliable option for Wentz and the offense.

Getting Jackson back healthy, along with the growth of Arcega-Whiteside and Ward, shouldn’t result in the Eagles passing on a WR early in the draft.  However, with a lot of WR talent, the Eagles need to be careful of not only who they select, but when they select them. They have 4 picks between rounds 2 and 4, which could enable them to move up in the first for one of the top three receivers.

With the weeks leading up to the draft, I’m going to assess some wide receivers the Eagles should look at. I will be breaking them down based on the round I see them being selected.

Missing on first round picks can set your franchise back years. There are three wide receivers that are clear-cut 1st round talents have number 1 WR ability.

Jerry Jeudy, whom many believe to be the top WR in the draft, is expected to be drafted early on. If that’s the case, then the Eagles would most likely need to move into the top 12 to land the Alabama star. Jeudy is a 6’1” WR that is ready to step in and be a number one receiver. He has the size and speed to step into the Eagles offense right away and command full attention. His explosive get off and route running ability allows him to gain separation which helps him make big plays down the field. Jeudy displays excellent hands and has sound footwork breaking in and out of cuts. He uses his quick feet to beat press man coverage and his elite quickness to find the open spots against zone.

Fit in the Eagles offense

Currently constructed, Jeudy would slide right in as the Eagles number one receiver on the outside. I could see the Eagles moving Jeudy all around the field. When Alshon comes back from his injury, Jeudy would be an ideal number two wide receiver in this offense. Fully healthy Jeffery and Jeudy outside, with Jackson, Ward, and Arcega-Whiteside getting time in the slots, would help the offense drastically. However without Jeffrey in the lineup, Jeudy would be the perfect option on the outside and could draw a high volume of targets. Jeudy is the best option for Wentz and the Eagles, but his projection is anywhere from picks 5 to 12 in the draft, meaning the Eagles need to move up at least 9 spots.

Likelihood to be drafted by the Eagles: 20%

CeeDee Lamb is a 6′ 2.5″ wide receiver out of Oklahoma that, along with Jeudy, is week 1 ready for the NFL. His strong hands, reliability, and IQ when running routes separates himself from the rest of the field. During Lamb’s last three collegiate seasons he amassed 173 receptions for 3,292 yards and 32 touchdowns. His breakaway speed and elusiveness during his run after the catch makes him a threat to score every time he lines up. In Lincoln Riley’s offense at Oklahoma, Lamb was asked to do it all. He ran all the routes, both in the slot and on the outside, and he has shown to be willing to block in the run game.

Fit in the Eagles Offense

The one receiver that is probably most NFL ready between Jeudy, Lamb, and Ruggs III, is Lamb. Coming from an air it out attack at Oklahoma, Lamb caught passes from Baker Mayfield, Kyler Murray, and Jalen Hurts. Stepping into Doug Pederson’s pass heavy offense with Carson Wentz at the helm should be a seamless transition for the wide receiver. Like Jeudy, he’d likely start as an outside receiver and become the number two when Alshon returns. Putting him in the same offense as Ertz and Goedert and Jackson, Lamb should have plenty of room to catch passes in space and rack up the yards after the catch. There is a chance he goes ahead of Jeudy, but he most likely will be taken after him in the 12 to 16 range. Yes the Eagles would have to move up, but it shouldn’t be too far.

Likelihood to be drafted by the Eagles: 30%

Henry Ruggs III is the most intriguing of the top three projected receivers in this draft. Leading up to the combine, Ruggs was viewed as the third best in the group. After a stellar 40 yard dash time of 4.27, Ruggs became the star of the combine. Ruggs by far is the best athlete among the group. Ruggs does an excellent job at attacking the football and making plays against physical receivers. Saying Ruggs was overshadowed by Jeudy isn’t fair, but Ruggs didn’t garner enough recognition during his time at Alabama. At 5’11”, Ruggs may not have the size of an outside receiver, but he certainly has the potential. He has the perfect combination of speed, hands, catch radius, and RAC ability to become and elite NFL slot receiver, something that could immediately lift the Eagles offense.

Fit in the Eagles offense

After DeSean Jackson got hurt early in the year, the Eagles desperately lacked speed. Drafting Ruggs would seemingly open up the offense and allow the other weapons to thrive as well. While there is a chance Ruggs is limited to a slot receiver role during his rookie season, he would have an excellent mentor in Jackson. Putting him in space in the middle of the field against a teams slot corner or safety, would give the Birds a significant advantage. Early in his career, we’ve seen that Carson Wentz loves throwing the deep ball and getting chunk plays. By pairing Ruggs with Jackson, the Eagles should get back to attacking the down the field vertically.

Likelihood to be drafted by the Eagles: 45%

While all three wide receivers are NFL ready, it’s still too soon to say who the clear-cut number one is in the draft. RIght now Jeudy is the most complete, and Lamb has the package to make the most immediate impact. Ruggs on the other hand may not be the best amongst the three now, but has all the skills and potential to be the best in the draft over time.

No Receiver in the first round? Don’t panic there is plenty of talent.