Linebacker at pick 21? The Eagles need to consider it. 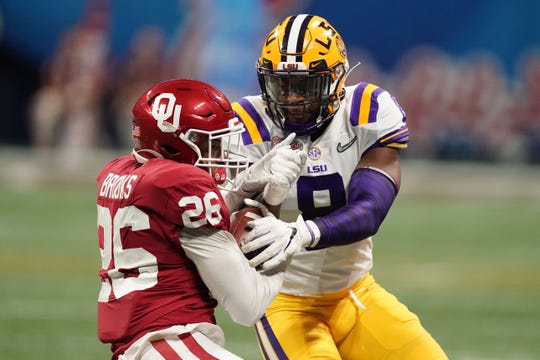 Since the final buzzer sounded during a cold January evening at Lincoln Financial Field, where the Seahawks defeated the Eagles 17-9, it’s been known that the Eagles need to improve their wide receiver position. It has also been known that next week’s wide receiver draft class is being labeled as historic. For months you have probably read countless mock drafts having the Eagles select a wide receiver at pick 21. Whether it was Henry Ruggs III, Justin Jefferson, Jalen Reagor, or even Denzel Mims, almost every mock draft has the Eagles taking a wideout.

However, the Eagles are not one player, at one position away from being a Super Bowl favorite. Jason Kelce is getting older and the Eagles need to start looking at a replacement for the All-Pro center. They acquired Darius Slay from the Lions to bolster their secondary group, but still have plenty of questions surrounding the others at that position. They even signed Javon Hargrave to put him with Fletcher Cox and Malik Jackson to solidify their front line. They signed linebacker Jatavis Brown from the Chargers and cut Nigel Bradham and Malcolm Jenkins.

During the Super Bowl run, the Eagles got timely sacks, and forced timely turnovers. As great as Nick Foles played, Jim Schawrtz’s defense played just as well. Against Atlanta they stuffed the Falcons inside the 5 on the final possession of the game. In the NFC Championship game, after Case Keenum went down the field on the opening drive, they turned up the pressure, and Patrick Robinson picked off Keenum which flipped the momentum for the rest of the game. And in the Super Bowl, Brandon Graham’s strip sack on Brady in the fourth, all but sealed the deal.

Last year the Eagles finished with a -3 in turnover differential. They finished with just 11 interceptions and 13th in the league with 44 sacks. Between injuries and inconsistent play, their defense was in constant shuffle. The Eagles upgraded their defensive line by retaining Hassan Ridgeway and bringing in Hargrave, and they got a clear number one corner in Darius Slay who specializes in taking away a teams’ number one receiver. While they brought in a rotational linebacker in Brown, they haven’t addressed the linebacker position enough. Not to mention Malcolm would often come down into the box in a linebacker role and pair with Bradham, they’re both gone.

Whether Jerry Jeudy, CeeDee Lamb, and Henry Ruggs III are available at pick 21 or not, there is a case to be made that the right pick is actually a linebacker. There are two linebackers in this draft that would step in and solidify the front seven for Jim Schwartz and the defense.

The NFL today is predicated on speed at all skill positions. Kenneth Murray from Oklahoma has plenty of it and it would be a huge boost to the Eagles defense. The 6’2” 240 lb linebacker would provide the Eagles with a backer capable of playing downhill. His speed, acceleration, and long frame would help stop the outside runs and provide another pass rusher in key situations. He plays the run well by meeting the back in the hole, and is a solid between the tackles tackler. His 4.5 speed and sideline to sideline ability will give him a big advantage in man coverage. He has the speed to keep up with smaller backs and the size to cover tight ends.

His instincts are great but he is full go at first movement. In the NFL, coaches will see his aggressiveness and will use a lot of misdirection to throw him off. Murray has to do a better job at dissecting any traffic in the backfield quickly and finding the ball carrier. In the open field Murray often tackles too high and smaller more agile backs can slip out of grasp. Another area Murray struggled in was block shedding. He has the long arms and the quick first step to beat many lineman, but if late to his read, lineman have an easier time engaging and holding off Murray. He needs to work on using his hands better to get rid of blockers and find the ball.

If you turned on a LSU game this past season, you probably heard the names Joe Burrow, Justin Jefferson, and Grant Delpit the most. The name you didn’t hear enough was Patrick Queen. He was just a one year starter at LSU and he didn’t disappoint. His ability to stay on the field in both run and passing downs was a big help to both LSU and his draft stock.

Watching Queen and Murray on tape, you notice there are a lot of similarities. Both have elite speed for linebackers, both fill gaps well, and both flow sideline to sideline well. Where Queen has the upper hand is in play diagnosis. While Murray attacks at first movement, Queen does a better job at recognizing the play and blocking scheme from the start and flowing to the ball. His tackling is much more fundamental in key situations as he stays square to the ball and drives through the ball carrier. As with Murray, Queen has the size and athletic ability to cover both tight ends and running back in the passing game. Despite being a one year starter, Queen was able to dominate in the tough SEC.

So who should the Eagles take?

While both Nathan Gerry and TJ Edwards did well at their time at linebacker last season, drafting Kenneth Murray or Patrick Queen would give the Eagles a potential All-Pro for years to come. Murray’s poor ability to shed blockers consistently might lead him to an outside backer for his first couple years, as Queen has the ability to play all three right away. Murray has the blitzing ability advantage over Queen as he has the quicker first step and great closing speed.

With that being said, I believe Patrick Queen is the better option for the Eagles. His ability to diagnose plays quickly in his head and take the right angles to the ball is something the Eagles are missing. His athletic ability and defensive awareness will often lead him into spots to cause turnovers. The deciding factor is tackling consistency. In a division with running backs Saquon Barkley and Ezekiel Elliott, having a linebacker that can matchup size with them is key. His pad level and technique will come in handy against these two. That’s if the Eagles decide to take him with their 21st pick.

No Receiver in the first round? Don’t panic there is plenty of talent.