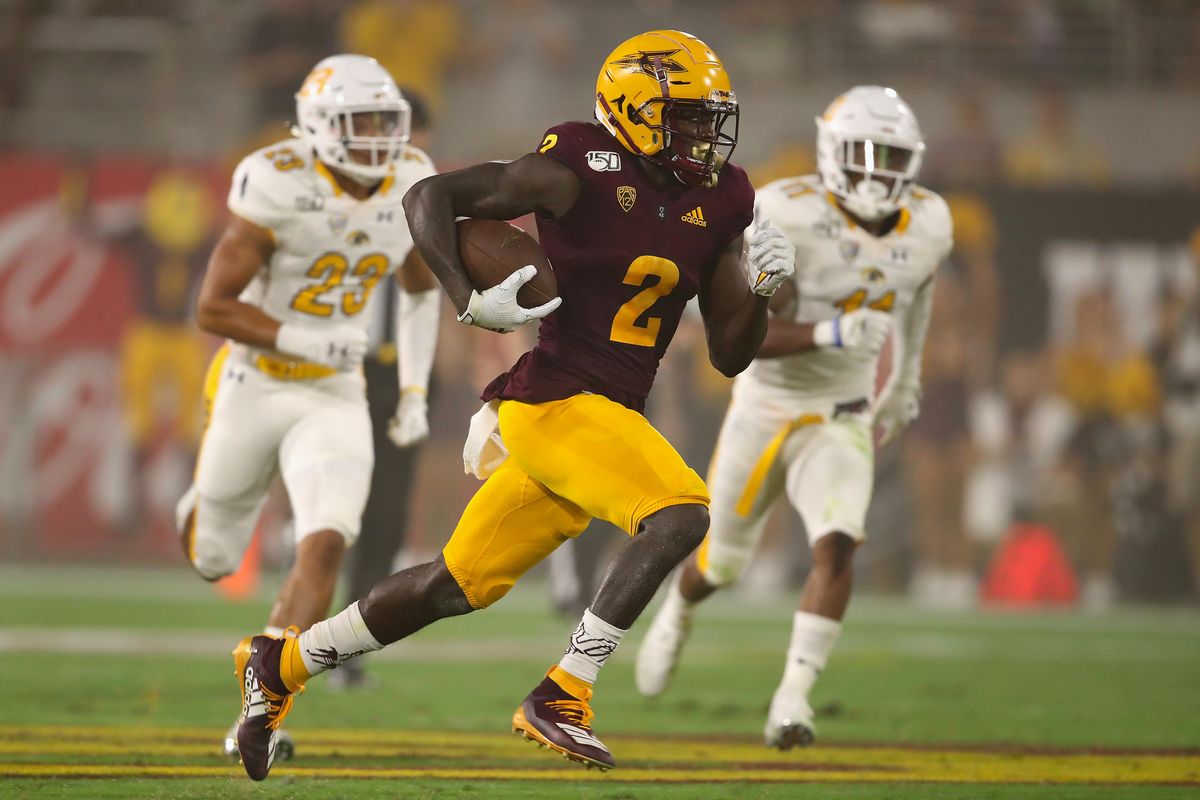 The NFL draft is tomorrow and outside of the first overall pick, no one knows who is going where. In essence, that is what makes the weeks leading up to the draft so entertaining. Everybody is watching highlights on youtube or reading a mock draft at least every other day. For the Eagles this year, the holes are glaring. They need playmakers at both the wide receiver and linebacker, and as a team they need an infusion of youth to compliment the veterans they have already on the roster.

Tomorrow the Eagles will be swifting through draft charts, reading every report on every player they scouted, in hopes of finding the next great Philadelphia Eagle. Does that mean package picks and assets to move up for Jeudy or Lamb? Should they move back from 21 and get extra picks to acquire roster depth?

As we wrap up our draft coverage here at GCOBB.COM, let’s examine 4 trade possibilities that the Eagles could execute, as well as a dream scenario mock draft for the birds. We will rank the 4 trades in order from least likely to highest possibility, and the mock will allow us to look at late round options for the Birds.

The Eagles trading out of the first round completely likely means the top 4 wide receivers are off the board and by moving back it helps them acquire depth options. The Chicago Bears do not have a first round pick as they traded it away for Khalil Mack. The Bears could be willing to jump into the first round if one of the top defensive players starts to fall. In a division with Aaron Rodgers, Matthew Stafford, and Kirk Cousins, the Bears could look to get an impact corner or pass rusher. Also, Rasul Douglas is the odd man out in terms of the Eagles depth chart. In addition to adding Slay, Douglas will be due roughly $2 million next season and paying a 5th corner that money is unlikely.

The Eagles would then have three second round picks at #43, #50, and #53. Having those three picks means the Eagles can grab at least one of the fringe first round wide receivers that may have fallen. Coming out of the second round with Brandon Aiyuk, Laviska Shenault, and a defender would be a great start to the draft.

Howie Roseman has never been shy about moving up. In fact he did it to draft Fletcher Cox in 2012 and Brandon Graham in 2010. He also made two trades in 2016 to move up to get Carson Wentz, and just last year he moved up to get Andre Dillard. The San Francisco 49ers have two picks in the first round at #13 and #31. After pick 31 they don’t pick again until pick 156 so the 49ers could look to move back and pick up some picks.

Should the Eagles jump up into the top 15, we can assume either Jeudy, Lamb, or Ruggs is still on the board. By executing this move the Eagles would fill their immediate need at wide receiver and take the pressure off hitting on a receiver in the later rounds.

If the top three receivers are off the board, the Eagles may be able to trade back in the first round and still land a good receiver. Baltimore has a strong history of drafting defensive talent in the first round and could be targeting a Yetur Gross-Matos, DE from Penn State, or a Patrick Queen, LB from LSU. The Ravens would need to jump Seattle to assure they get who they want so a swap with the Eagles makes sense.

The Dolphins have 3 first round picks in this years’ draft. The belief is they will select a QB, either Tua Tagovailoa or Justin Herbert, with their first pick. The Dolphins need to protect their new franchise QB and with the top tackle options off the board they will be in a perfect spot to trade back a few spots.

By the Eagles moving up 3 spots, they move ahead of the Raiders and Jaguars would could take receivers with their second picks in the first round. Because they are only moving up three picks, the Eagles should be able to keep their second round pick which will allow them to grab another receiver if the opportunity presents itself.

What the Eagles do come draft night will be highly criticized either way. If they move up, there will be people saying they gave up too much. If they trade back, those same people will complain they didn’t do enough to land one of the top three receivers. Since we just looked at four trades the Eagles could make on draft day, for this final mock we are going to construct it as if the Eagles don’t make any trades.

Let me start by saying the odds the Eagles select Patrick Queen are slim. As an organization they don’t value this position highly. With that being said, Jeudy, Ruggs III, and Lamb are most likely going to be gone at 21 and there is a good chance Justin Jefferson is gone too. If those four are gone, Patrick Queen not only checks off the best player available need, but also a player of need. He is a three down linebacker that has All-Pro ability and could anchor the middle of the Eagles defense for years to come.

Best case scenario is Aiyuk is still on the board here in the second round. His combination of speed and size fills a big void in the Eagles offense. A key attribute of Aiyuk is his run after catch ability. In an offense last year that struggled getting chunk plays, getting Aiyuk should alleviate that issue. The only issue here is if Aiyuk will be on the board this late in the second round.

With Lane Johnson and Andre Dillard securing the tackle spots hopefully for years to come, the Eagles need to secure the middle of the offensive line. Hennessy played primarily center at Temple and played really well. He transitioned from a high school offensive tackle into a well decorated center. He was named to the third-team AP All-American, a first-team All-American Athletic Conference, and was a finalist for the Remington Trophy. Hennessy isn’t the biggest or strongest lineman in the draft but he uses excellent hand work and foot work to get positioning on his defenders.

With three picks in the fourth round, expect the Eagles to try and fill some defensive needs. A quiet need is another safety. Yes Malcolm Jenkins is gone, Rodney McLeod is back, but they’re moving Jalen Mills to the other safety position, so the Eagles are going to need some depth. Wallace has the ability to play the deep traditional cover role, as well as step up into the box and play the slot.

With Miles Sanders as your lead back and Boston Scott getting the back up touches, the Eagles are pretty small at running back. Getting Dillion here in the fourth round would give the Eagles that powerback that will pick up those tough yards between the tackles. He can be a three down back as he is adequate in pass protection, but I don’t see the Eagles taking carries away from Sanders and Scott early in games.

Halapoulivaati Vaitai became a free agent at the end of the year and signed with the Detroit Lions. The Eagles have their two tackles locked in but you always need depth. Adenjii does an excellent job in space and uses his 6’4” frame to gain leverage. Hit lateral movement makes him a great scheme fit in the zone rone scheme.

With the lack of speed on the outside from the Eagles receivers, I don’t see them walking away from the draft with just one. Gandy-Golden from Liberty has the makeup to be a number one receiver in an NFL offense. There is an decent chance Golden is gone before pick 168, but should he be here, the Eagles would be wise to take a flyer on the wide receiver from Liberty.

Last year the Eagles drafted Clayton Thorson from Northwestern and he didn’t even make it past roster cuts. The Eagles do have Nate Sudfeld as their backup, but if Josh McCown decides to retire, Sudfeld would be the only other QB on the roster. Grabbing Montez in the 6th round would give the Eagles a developmental project. Montez has a lot of work to do as his decision making needs improvement, but with Doug Pederson and Carson Wentz in the room with him, he could become a decent backup.

Linebacker at pick 21? The Eagles need to consider it.