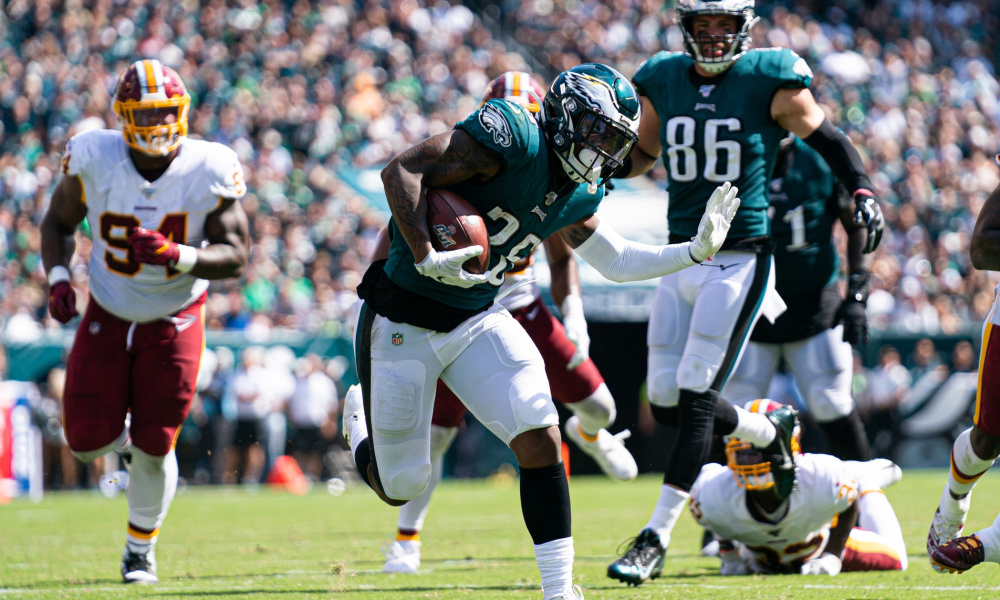 It’s now official Eagles running back Miles Sanders won’t play tomorrow against the Washington Football Team.  He’s got a hamstring injury and I think it’s the right move for the Eagles to sit him down.   The Eagles will look to their backups at the running back position, Boston Scott and Corey Clement.

Scott did a great job for the Birds down the stretch last year as a playmaker.  He’s on the small side but Scott is able to run inside and outside effectively and he’s very good at catching the football out of the backfield.  I think he’ll also do a good job with the screen game and running draws.   The 5’6′ does a great job of getting behind his offensive linemen to point where the defenders are sure where’s at until it’s too late.  I’ve always liked the idea of small running backs running behind the big offensive linemen in the NFL.  I can tell you as a former NFL linebacker, it’s not easy to find out where the little guys are behind big offensive linemen.

As for Clement, he has had a problem with a thigh injury, so he’s going to need to fight his way through it.   Cory is a solid veteran player and he’ll be able to go and do a good job for the Birds.  The key for Clement is much like Scott in that he can hurt a defense as a ball carrier and as a pass catcher.

Again, I think the decision not to play Sanders is the right thing to do.  Running backs have to really stress their hamstrings during a game.  They want to make sure to give Sanders time to let that hamstring get to 100% or close to it, so he doesn’t have to play with that hamstring bothering him throughout the season.

One of the keys to tomorrow’s game will be whether All-Pro right tackle Lane Johnson plays or not.  He’s been bothered by an injured ankle.  If he doesn’t play, the Eagles will need to start second-year guard/tackle Nate Herbig, rookie Jack Driscoll or 3rd year former rugby player Jordan Mailata.  It will be tough going for either one of these young players because they will be matched up against former number one pick Montez Sweat.

Don’t Know How It Happened, But Peters To Left Tackle Is The Right Move

Throw The Ball Away Carson!!! Don’t Try To Be Superman!!!