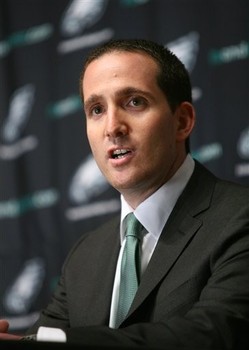 Howie Roseman should be fired this off-season if Kyle Pitts or Ja’Marr Chase dominates the competition in a similar fashion to 2020 rookie of the year honoree Justin Jefferson.  Roseman lacks the credentials with his recent talent evaluation deficiencies to part with the 6th overall pick.  Hoping the Eagles select the correct ‘remaining’ player at pick twelve will be determined by the decision making of six other teams, including the Dallas Cowboys and New York Giants.

The headline of the deal is the future asset from The Miami Dolphins, a team trending up after a 10-6 record in 2020.  The Dolphins are coached well, they added William Fuller to their receiving core this off-season, and have multiple selections in the first and second round of the upcoming draft.  While the jury is still out on sophomore quarterback Tua Tagovailoa, all signs would be pointing on a wildcard seed, translating to a 2022 first round pick in the late teens to early twenties.

Andre Dillard and Jalen Reagor are perfect examples of Howie proving he is unfit to determine NFL talent in the back third of the first round.  Despite the updated mock drafts landing the Eagles a talented prospect at pick twelve, the biggest fear that should be circulating is how Roseman has positioned himself to return in 2022.  Would botching the pick at twelve and failing for the third consecutive season be enough for Howie to be fired?  The answer is ‘no,’ what Roseman did with this trade is exactly what excites Lurie the most.

The acquisition of a business opportunity to add more talent by decreasing odds of surety is the philosophy that trumped this trade.   The Eagles are clearly building for the future, needing to fill so many spots because of Roseman whiffing on multiple drafts.  The same man who continues to hold the franchise back is the man with the power to control the future; simply too many cooks in the Eagles kitchen.