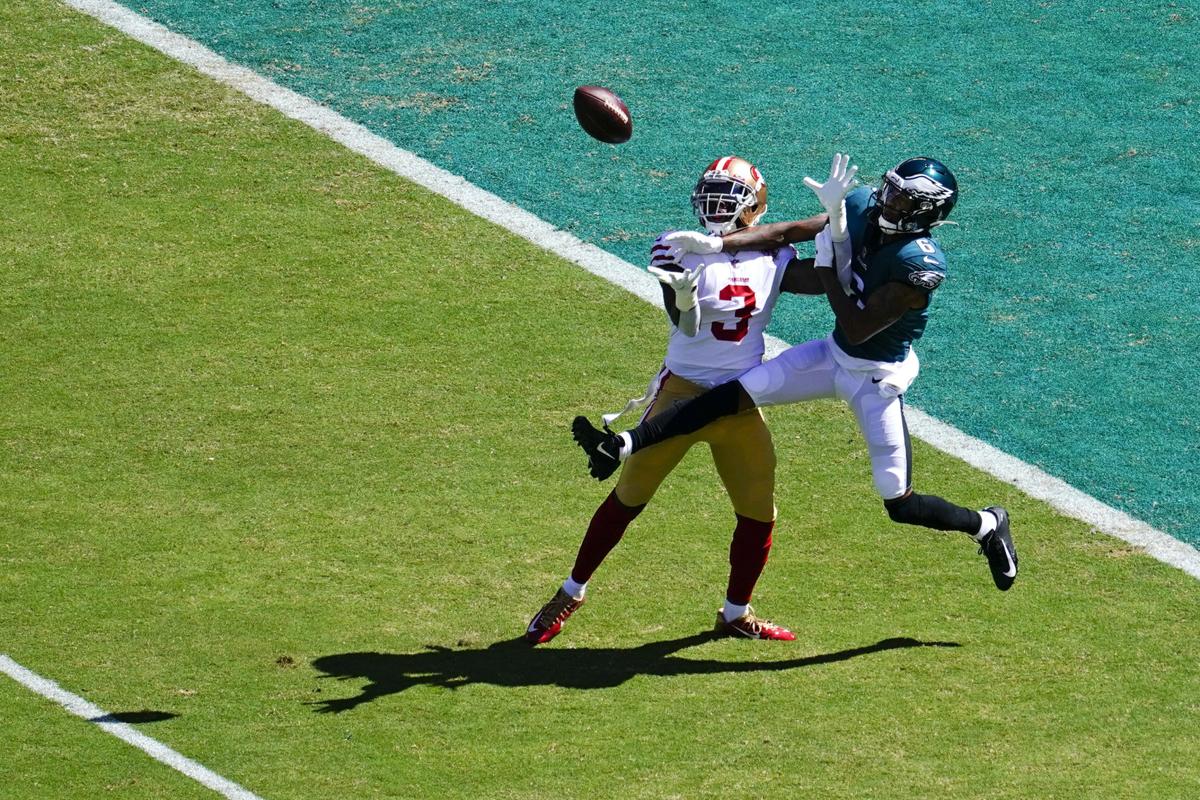 The Eagles fell to the San Francisco 49ers yesterday afternoon 17-11 to move to 1-1 on the season.

In a slow moving first half, defense and missed offensive executions were at the forefront. The Eagles forced a three and out on their first two defensive drives throwing SF off their rhythm.

The Eagles would go down the field on their second drive, 11 plays worth, and kick a 45 yard FG. That was all the scoring for the first 23 minutes of the first half. The 49ers and Eagles would take turns controlling the ball but come up empty. The Eagles had another drive end in a blocked FG after having a TD pass to Reagor called back. Hurts threw a perfect ball down the sideline to a streaking Reagor, however after reviewing the play it showed that Reagor stepped out of bounds before catching the deep ball.

The Eagles would then force another punt. This punt however was downed perfectly inside the 5. Sirianni and Hurts decide to take a shot down field and they connect on a deep pass with Quez Watkins that goes for 91 yards. A few plays later the Eagles take a shot into the endzone and draw a DPI on SF, resulting in the ball at the one yard line. The Eagles would be turned away four times at the 1, turning the ball over on downs. San Francisco would then go on a 12 play 97 yard drive that resulted in a TD that gave them a 7-3 lead at half.

The second half was all San Fran. The Eagles didn’t give up the big killer play, but they did seemingly get tired. San Francisco was able to dominate the line of scrimmage and wear the Eagles down with the running attack. Once the Eagles started over committing on the running game, Shanahan was able to use his play action and misdirection to keep the Eagles guessing. Jimmy Garoppolo would later capitalize on the Eagles being tired on the defensive line and go on a 16 play 92 yard TD, where he capped it off by running the ball in from a yard out. The Eagles would make it close in the end as Hurts used his legs to get the Eagles down the field and into the end zone on a one yard run. The Eagles would run out of time and timeouts as San Francisco would convert on a key 3rd down and subsequently run the clock out.

Not only did the Eagles lose on the scoreboard, they lost two key contributors. Long time DE Brandon Graham left early in the game with what a torn achilles. The Eagles veteran presence on the DL was always something they could rely on. With Graham going down, this is a huge blow to their defense. On the other side of the ball the Eagles also lost RG Brandon Brooks. There has been no official diagnosis yet but initial tests lend to believe it is a pectoral injury. Should Brooks be out for an extended period of time, the assumption is rookie C/G Landon DIckerson would slide in and take the place of the injured Brooks.

Going into the game I felt the Eagles were going to be in for a tough one. San Francisco is one of the elite teams in the NFC, and are built to win now. They’re solid in every aspect of the ball and very well coached. The turning point for me was when the Eagles had 1st and goal from the 1 yard line and failed to score. After the game, coach Nick Sirianni was asked about the sequence of plays in the stretch and owned up to his mistakes. “I need to do a better job in that situation” sadid Sirianni. The Eagles had other opportunities to score after that and didn’t, however the ensuing 49ers drive resulted in a TD as the second quarter winded down.

Nick Sirianni and the Eagles have an extra day for preparation next week as they play Monday night down in Dallas against the division rival Dallas Cowboys. The Cowboys are 1-1 after pulling out a late victory against the Chargers in LA. Early season divisional games are always important, but with the NFC being deep this year and early indications saying Washington and the Giants could be down, this is a pivotal game. A win give the Eagles essentially a 2 game lead in the division over the Cowboys, and some momentum for a week 4 matchup against the Chiefs.

Examination Of The Eagles In The Red Zone