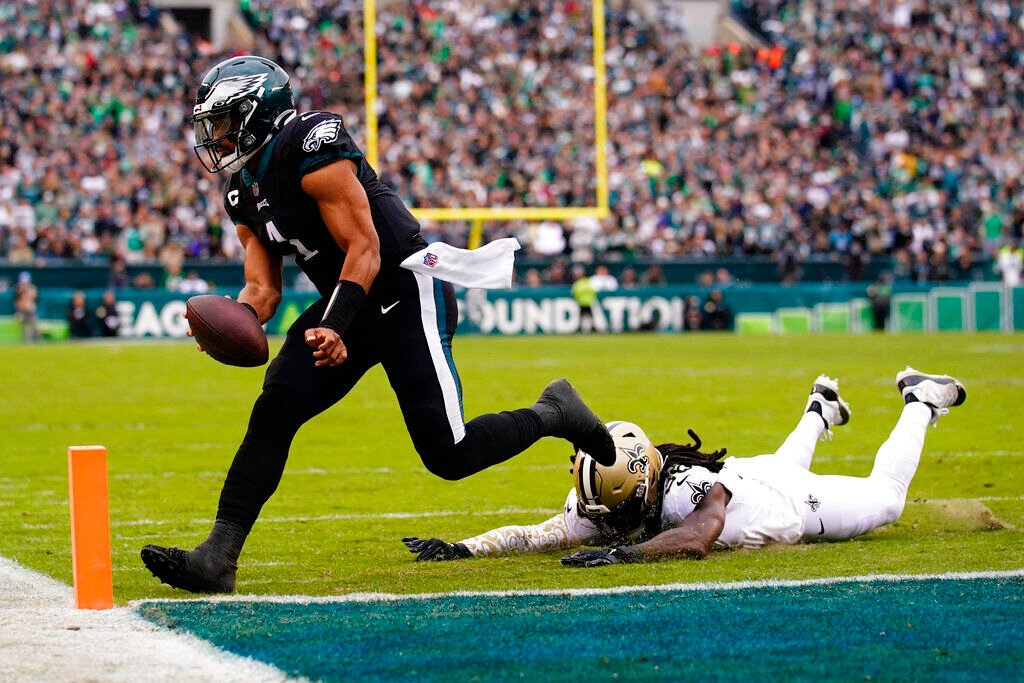 I see a big game against the Giants for Eagles tight end Dallas Goedert. Once the Eagles get their running game going, it’s going to make it nearly impossible for the Giants to contain Goedert because the linebackers and safeties are going to have to cover him. They’re going to be thinking about stopping the running game, once the Eagles get going with Miles Sanders, Boston Scott and Kenneth Gainwell.

Jalen Hurts is going to take occasional shots downfield and I expect Giants Pro Bowl cornerback James Bradberry to be following Devonta Smith all over the place. Don’t be surprised if Quez Watkins gets open deep because he has the best deep speed on the Eagles roster. I think Hurts scrambles will create problems for the Giants just like it’s done for all the defenses the Eagles have faced. New York doesn’t have the speed in its pass rush that can contain Hurts. He will get outside for big rushing plays and big throws downfield.

The Bradberry and Smith battle is going to be a good one. I’m going to keep my eye on that, but I don’t want to see Hurts taking chances with Bradberry by throwing out routes that are late and behind the receiver. We saw what happened last week when the Saints Trevor Siemian threw one of those to Darius “Big Play” Slay because they can be taken back for a touchdown. Turnovers are the only ways that I see the Giants winning this game. It will have to be Miles Sanders putting the ball on the carpet or Hurts throwing interceptions for the pathetic Daniel Jones-led Giants to win the game

Giants offensive assistant Freddie Kitchens is going to be calling the plays for New York and he likes the deep. I think this is going to give the Eagles defensive line a chance to get to Jones. The Giants offensive line is horrible. Right guard Will Hernandez is a human turnstile. Right tackle Nate Solder seems to have gotten old overnight. New York is terrible at blocking for the passer and we know that Jones doesn’t have a clue. He is a walking talking turnover machine.

I want to see a big game from Javon Hargrave, Fletcher Cox, Josh Sweat and Derek Barnett. Each of them should get a sack or a big play, a fumble recovery or some type of big play. The Eagles defense can’t get too passive and let Jones getting his confidence. They need to jump on him from the start, by stopping running back Saquon Barkley and making the Giants one-dimensional. Once they do that it’s going to three and out for the Giants or a turnover.