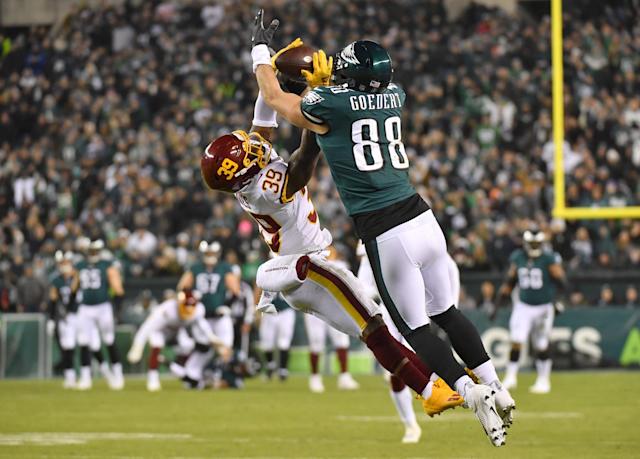 It definitely didn’t start out the way the Eagles wanted. You had the two players who wound up being the stars of the game starting out very poorly.

Tight end Dallas Goedert dropped a pass that was right in his hands, then nonchalantly let the ball fall and hit his ankle, pop up in the air and be intercepted by Washington defensive back, Landon Collins. The referees missed the call and blew the whistle to stop what should have been a return for a touchdown. It was awful the way Goedert seemed to be nonchalant on the play, which was the start of a must win game that couldn’t have been any worse. You could feel and tell that Eagles fans were getting nervous at the start of what supposed to be a blowout.

On the next Eagles possession, the Birds drove the football down to Washington’s twenty yard line. Birds quarterback Jalen Hurts took the snap and started moving around in the pocket in search of an open target. Instead of holding the football with two hands while in the midst of the Washington pass rush, Hurts held the ball in one hand. Washington defensive end Montez Sweat knocked the ball out of his hand and the Birds quickly found themselves in a 10-0 deficit. He deserved to be chewed out by head coach Nick Sirianni because I was chewing him out up in the media room at the Lincoln Financial Field.

Goedert and Hurts, used those poor plays as motivation to focus more intensely and ultimately redeem themselves. They each may have had the best games of their NFL careers. Goedert had a great game catching seven balls for 135 yards. The Birds tight end is continuing to show the rest of the league, that he might be the most multi-talented tight end in the NFL. He can block, get open consistently, make tough catches, as well as break tackles and run with the football after the catch.

Hurts ran for two touchdowns and threw for another, while throwing for 296 yards.   It was an outstanding game by the young quarterback in a must-win game for the Eagles against a Washington team that put up a better effort than everybody thought. This was a huge game for Hurts because this was the first game he played after his poorest game of the season against the Giants. This was his first game after his backup, Gardner Minshew had played in the win over the New York Jets. Hurts had to play well or jeopardize this season and his future.

I also much single out the Eagles offensive line. For the fifth time this year the Eagles ran for over 200 yards. This time it was 238 yards and they did without rookie guard Landon Dickerson. Sua Opeta started in his place and the Eagles running game didn’t miss a beat. Birds head coach Nick Sirianni is doing a good job of mixing up the different types of runs and keeping defenses guessing. He’s also been able to use play action passes to get Goedert involved in the passing attack. They must continue to use all of their weapons.

Running back Miles Sanders had his best game of the season with 131 yards on 18 carries. He’s continuing to show that he can be the leading ball carrier on this run heavy offense. Sanders is still waiting on his first touchdown of the season. I wouldn’t be surprised if he breaks off one of his long 60 or 70 yard touchdown runs in the final three games of the season.

Defensively, we saw Fletcher Cox show up big time with a big sack at the end of the first half. Washington was close to getting in field goal range, but the All-Pro defensive tackle bullied his way into the backfield and sacked Gilbert. It knocked Washington out of field goal range and ended the first half. Cox also made some big plays down the stretch, as he put pressure on the young Washington quarterback. It was great to see Cox, the perennial All-Pro step up with everything on the line. That’s what big-time players do when the game is on the line. it was much needed because the Eagles defensive line hadn’t had much of a pass rush for most of the game but when it was on the line  Mr. Cox came through with some big plays

I have to give Washington head coach Ron Rivera and his football team a lot of credit. They had to get a quarterback from the junkyard and Garrett Gilbert did a good job for somebody being signed a few days before the game. He made some good throws and he looked like a competent NFL quarterback. They were in the game nearly the whole way right up until the end .

Going forward, if the Eagles don’t play better the next time they play Washington, they won’t beat them. They can’t afford to fall behind ten to nothing with turnovers against a team like Washington.