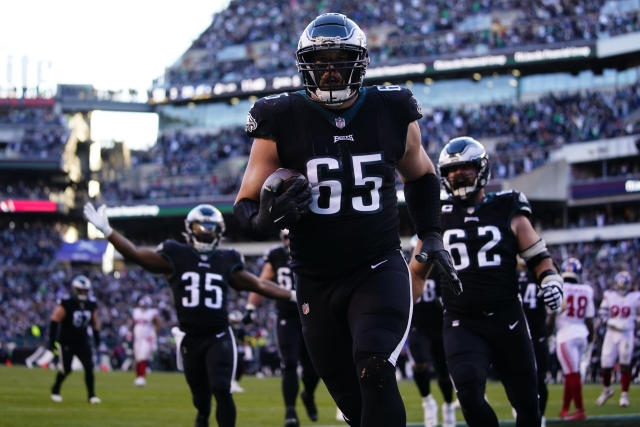 It definitely wasn’t what the Eagles had planned with the slow start and sloppy play at the beginning of the game. The Birds were unable to put together a drive in the first half because of dropped passes, fumbles and the decision to not lean on the running game, but in the second half after a Rodney McLeod interception the Birds got things rolling.

There’s something about throwing the ball to your offensive tackles for touchdowns that is humiliating to the opponent. The Jalen Hurts pass to Eagles Pro Bowl offensive tackle Lane Johnson that was the statement of domination by the Birds in the third quarter, which was a way of saying “Everyone drive safely on your way home because this contest is over”. It was fitting connection because of the important of Johnson to the football team and the mental health battle that he went through early in the season. The Eagles running game behind Johnson and his buddies, Jason Kelce, Jordan Mailata, Landon Dickerson and Nate Herbig has turned the season around and has teams wanting to avoid them in the playoffs.

Hurts struggled in the first quarter and didn’t get much help from his receivers. He fumbled again while holding the ball in one hand as he moved around the pocket. He also threw a pass that should have been intercepted. Hurts seemed to snap out of it in the second quarter and he did get a rhythm going with his receivers in the second half. He made a nice touchdown throw to Devante Smith and Smith did a great job of getting his feet in a bounds.

I don’t think Nick Sirianni should start games out with their passing game. The Eagles offensive strength is running the football. Their passing game isn’t one of the best in the league, but their running game leads the entire league. Why start the game with the mediocre part of your attack. Their ground attack is the reason they are 8-7. Once they start running the ball, the opposing defense will need to commit so much to stopping the run, that they leave themselves vulnerable to the passing game.

Miles Sanders had a good game even though he broke his hand. His ability to accelerate when he sees a hole seperates him from the other running backs. I like the fact that he’s not dancing in the backfire before hitting the hole. When Sanders steps on the gas, you know that’s an easy 10 or 15 yards. The other backs hit the accelerator and that’s only five or six yards. The Birds are going to miss his burst. I still have a problem with the fact that he continues to drop too many passes. Like Dallas Goedert, Sanders starts running before catching the football. I think his return will be one of the keys to the Eagles having success in the playoffs. They need him back and playing at the top of game to beat anybody in the playoffs.

Boston Scott, who is the Giants Killer, did good job of getting into the end zone, when he came into the game after Sanders got hurt. I think Scott and Jordan Howard’s running style has influenced Sanders by causing him to get north and south and not dance in the hole.

The Birds had a good game running the football, despite the fact that they didn’t run for 200 yards. The running game, which totaled 130 yards was effective because it opened up the play action passing game. That’s why the ability to impose their will on a defense is so effective. If the opposing defense commits too severely to stop their running game, it makes them vulnerable to the pass. Somebody take that information to Sirianni and his staff. Defenses are afraid of their running game, but they are not afraid of their passing game.

We’ve got to do something about Dallas Goedert and his dropped passes. He’s a special talent and there’s no way a defense can commit to stopping the Birds running game and still be able to stop Goedert from slipping out on pass routes. The linebackers and safeties are so focused on their run keys that Goedert is able to release and get open before they realize that the run fake isn’t for real. He’s got to discipline himself to look the football in, secure it, then start running over little defensive backs. Dallas stop trying to run before you catch the football!!!!

I would love to see the Birds get young Tyree Jackson involved in the passing game because he’s a freakish athlete, who at 6’7″ is too big for any defensive backs in the league to deal with in the red zone or on third down. Both Goedert and Jackson will allow to Eagles to impose their will on the opposing defense. I love the potential I see on this offense.

Eagles wide receiver DeVonta Smith had a nice game versus the Giants. He caught five passes for 80 yards and a touchdown. You can see that he and Hurts are starting to really get that consistency about their connection. They’re on the same page. Smith did a great job getting his feet in bounds on the touchdown catch.

I have to give a game ball to defensive coordinator Jonathan Gannon the Eagles defensive coordinator because the Eagles defense pounded the Giants quarterbacks to the point where both of them turned into “Check Down Charlies”. All they wanted to do was throw the ball as quickly as possible to the running backs on short routes. They have got to fire the people who are running the New York personnel because their offensive line is terrible and has been terrible for a while.

I think Gannon has been trying to get Fletcher Cox, Javon Hargrave and the rest of their defensive line in one-on-one situations. They jump in their five defensive line front and it forces the opposing offensive line to block them one-on-one and a team like the Giants have no chance in that situation. They were pounding Jake Fromm so much that he didn’t want the football. Mike Glennon took over and he didn’t like those big guys pounding on him either.

I like the way the linebackers and defensive backs moved up into a tight coverage on both man-to-man and zone coverages because they knew the defensive line was getting to the quarterbacks quickly. The interception by Alex Singleton was an example of the tight coverage resulting in a big play by the Birds. I’ll be interesting in seeing whether the defense can impose their will on the Washington Football team again to put the Eagles in the playoffs.