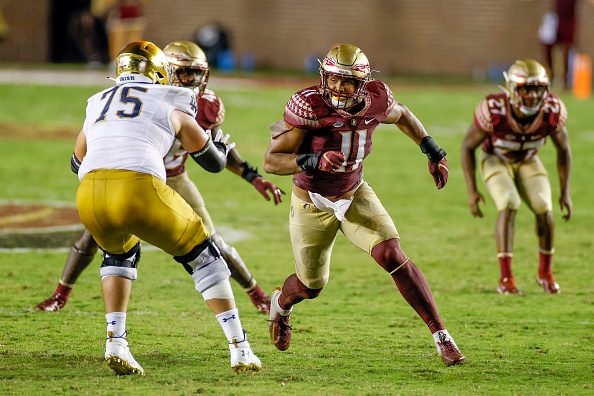 The Eagles must address their needs on the defensive side of the ball in this draft. Unfortunately, they need help at nearly every position on defense, but they will have plenty of opportunities. Eagles General Manager Howie Roseman and his crew have ten picks in this draft, including two picks in the first round, two picks in the third round and three picks in the fifth round. Defensive coordinator Jonathan Gannon has to be thrilled about all the defensive talent in this draft. As long as the Birds can target and acquire the right selections, they can get a lot done in this year’s selection process.

Let’s take a look at the Eagles needs at each position.

The guys wearing the midnight green need to draft some young talented edge rushers. Brandon Graham is near the end of his career and Derek Barnett, who they resigned, just isn’t good enough. Josh Sweat led the team in sacks a year ago with 7.5, but he needs to continue to improve. This draft is deep in edge rushers, so the Birds will have plenty of opportunities to improve at this position. In the first round, I could see them drafting Michigan’s David Ojabo, Purdue’s George Karlaftis or Florida State’s Jermaine Johnson with one of their first round picks. They may be able to get Ojabo later in the draft because he tore his Achilles tendon during his Pro Workout. I like the upside of Ojabo because he’s a former basketball player, who hasn’t been playing football very long. He’s got all the measurables, 6’5″ 255 pounds with outstanding speed and quickness. I think his upside might make him one of the best draft picks in the first round. This young man is going to get better and better.

Johnson is rated higher than Ojabo because right now he’s a better player. I think this Seminole is going to give you instant production because he’s polished and he’s got speed and quickness. This young man is an outstanding player and he would be a great selection, if he’s still on the board at the time. I also believe the Eagles could find excellent pass rushing talent in the latter rounds.

The Birds could also use help inside at the defensive tackle position because they’re getting “long in the tooth” there. Fletcher Cox is near the end of his career and their best defensive tackle currently, Javon Hargrave isn’t a spring chicken at 29. I think Milton Williams has some potential, but the Eagles could use more young talent at the position. Georgia’s Jordan Davis is a great talent, but his work ethic and lack of production against quality opponents is disappointing. He has problems with his weight and that doesn’t work on the NFL level. I like his Georgia defensive tackle teammate Devonte Wyatt much better. Wyatt is a much better pass rusher than Davis and he seems to have better stamina.

The Eagles also need to replace a starting cornerback. They lost Steven Nelson to the Houston Texans. I didn’t think Nelson was that good anyway, so I think the Birds have a chance of getting better at the position. In the first round, they may get their pick of a shut down corner in LSU’s Derek Stingley Jr., Clemson’s versatile Andrew Booth, and the talented but undersized Trent McDuffie of Washington. I would be very pleased if they got Stingley or Booth because I think they can both play cornerback at the NFL level right now and the Birds need that.

I also need to mention that they need help at the linebacker position. Roseman could shock the world and draft a linebacker in the first round. Utah linebacker Devin Lloyd is a special player, who could take the Birds defense to another level because of his great leadership qualities, blazing speed and tremendous playmaking ability. I’m not as high on Georgia’s Nakobe Dean because I don’t see the same size and athleticism.

Pro Bowl center Jason Kelce is very close to the end of his career, so they could use help at the center position and there are a number of talented centers in this draft. Their offensive line is outstanding and they have depth. This is one of the few positions where the Birds don’t have needs. They may use one of their lower picks on an offensive lineman.

They must improve at the wide receiver position. Right now they have last year’s number one pick, Devante Smith, who has tremendous talent and potential. Former first round pick Jalen Reagor is just not good enough and must be replaced. Quez Watkins has the speed, quickness and potential to be an outstanding receiver but he’s not there yet. They’re moving J.J. Arcega Whiteside to the tight end position. I expect the Birds to draft at least one wide receiver and they may get one in the first round. It could be Chris Olave of Ohio State, Treylon Burk of Arkansas or Jahan Dotson of Penn State.

Of course they could use more talented young running backs even though I like the talent they have there now, but the position is very demanding physically. You can’t get enough young talent at the running back position. They may use a late pick on a running back.

I don’t have great confidence in Howie in the first couple of rounds, but I think he will do well with the ten picks. He has struggled in the past when he’s drafted in the middle of the first round. I think Howie will be able get some talent later in the draft because I think the Birds player evaluation people do a good job of looking into the details. I think this is going to be a good year for the Birds.