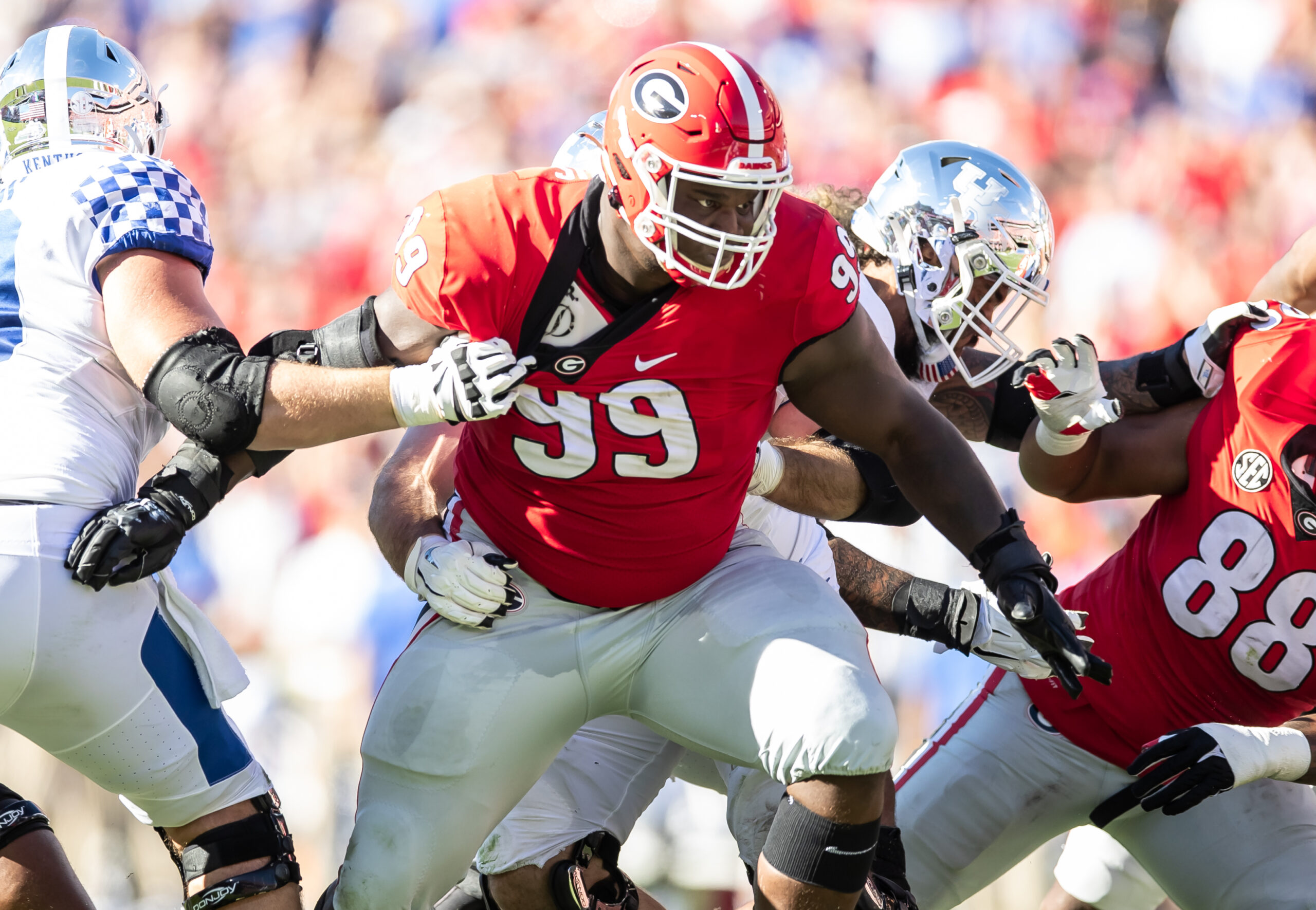 ATHENS, GA – OCTOBER 16: Jordan Davis #99 moves towards a tackle during a game between Kentucky Wildcats and Georgia Bulldogs at Sanford Stadium on October 16, 2021 in Athens, Georgia. (Photo by Steven Limentani/ISI Photos/Getty Images)

Georgia All-American defensive tackle Jordan Davis got the Eagles attention when he ran a 4.78 forty-yard dash at the NFL Combine. They were already eyeing the 6’6″ 345 pound behemoth during the regular season, as he dominated college offensive linemen while leading the Bulldogs to a National Championship.

As the first round picks were being made, Birds General Manager Howie Roseman knew he was going to need to move from the 15th pick in the draft to the thirteenth pick because the Baltimore Ravens were sitting at the 14th spot and ready to make Davis another huge Ravens defensive lineman in the mold of Haloti Ngata, Tony Siragusa and Calais Campbell.

Roseman continues to believe in the formula of prioritizing the quarterback position, the offensive and defensive lines as well as the wide receiver and cornerback positions. It helped the Eagles win a Super Bowl title, so Roseman and his crew see no reason to change it. Davis is a key part of this strategy because he immediately provides depth to the Eagles defensive line and he’s an eventual replacement for aging Pro Bowl defensive tackle Fletcher Cox.

Davis’ potential is through the roof because he has tremendous quickness off the ball and he has the long arms and power to be a dominant defensive lineman for years to come. He’s ready right now to be an unmovable object in the Eagles run defense.  Teams were unable to run against Georgia with Davis on the field because offensive lines couldn’t block him, but the young behemoth will need to do something different for the Birds.

I like the drafting of Davis, but he must develop his pass rushing skills or this will wind up being a poor selection.  Right now, he is not a good pass rusher.  In fact the Georgia coaching staff took him off the field on third downs.  Eagles defensive line coach Tracy Rocker must teach Davis how to rush the passer for this to be a good selection in the first round of the draft.  Rocker has the quickness, speed, strength, long arms and big hands, so he has what it takes to be a good pass rusher.  Davis has got to get in better shape and learn to pass rush.  Coach Rocker is on the hot seat because he’s being asked to develop Davis as a pass rusher and the immediate future of the Eagles will depend on his success.

I must admit that I was complaining all off-season that Roseman and the Eagles didn’t acquire a veteran wide receiver.   Yes, they reached out to a number of receivers but they weren’t able to sign any of them.  They wound up signing Zach Pascal, the veteran backup from Indianapolis, who caught about 35 passes last season.  At that point, they were able to only acquire a fourth receiver.

With everybody wondering what the Eagles were going to do with their second first round pick, Roseman made a move that stunned and shocked a lot of media people and Eagles fans.  The Birds traded the 18th pick in the first round and a third round pick to acquire Tennessee Titans Pro Bowl, 24-year old, proven and amazingly talented wide receiver A.J. Brown.

I’ve always said Roseman is a better trader than he is a drafter.  He used his trading ability to pull off one of the best moves of the entire 2022 NFL draft.  He acquired the services of Brown, a young Pro Bowl wide receiver.

Now the Eagles have a veteran receiver to lead their inexperienced receivers and they have a true number one receiver to take the pressure off of second year target DaVante Smith.  The youngster won’t be doubled-teamed with Brown on the field.  Smith, Quez Watkins and possibly Jalen Reagor will be able to learn a great deal from the veteran wide out.

Brown is a deep threat and he has already had a season where he averaged 20 yards per catch.  He’s been in the Pro Bowl and last year he was on the top-seeded team entering the AFC Playoffs.  The 20 yards per catch number proves he has deep speed.  Brown also has the power and strength to break tackles when gets his hands on the football.

The Eagles were able to acquire a number one receiver after all.  Brown makes the Birds offense better immediately because thanks to him teams won’t be able to stack up a defense against their running game.  The Eagles now have a passing game to go along with their running game.  This was one of the moves, which Roseman made that shut everybody up.  It was an amazing move to say the least.

In the second round, the Birds let their Pro Bowl center Jason Kelce scout and recommend Nebraska center Cam Jurgens.  The youngster, Jurgens is in the same mold as Kelce.  He’s the type of center, who can get out to the second and third levels and make blocks on defensive linemen, linebackers and defensive backs. Like Kelce he is a great athlete, who is smart and aggressive.  Jergens is quick off the ball on run plays and he has the range to make great blocks on outside runs, screens, draws and downfield.

The young man is a good athlete, who can run.  I take my hat off to Roseman and his crew, for giving a Pro Bowl center the opportunity to identify another talented, young center.

Initially, I wasn’t crazy about the pick of Jurgens because the Eagles didn’t grab Georgia middle linebacker Nakobe Dean, who was sitting right there and waiting to be scooped up.  How many times do you get the chance to draft an All American linebacker off of the historic defensive squad of a National Championship team?

Maybe Roseman and the Eagles knew something that we didn’t because to our shock, the Birds were able to select Dean in the third round of the draft.  It was an amazing opportunity for the Eagles, who definitely need a play calling and playmaking linebacker to lead their defense.

They were able to select Dean, who led the number one defense in the nation.  He’s the guy who was calling the defenses as making adjustments as their middle linebacker.  He’s a playmaker.  Dean was great against both the pass and the run.  He was very good at dissecting and anticipating how opposing offenses were trying to attack them.

He’s a brilliant player, who is a student of the game and great at anticipating what the other team is going to do.  Dean is just the kind of leader that the Eagles defense needs.  He’s a linebacker that is a difference maker.

There have been numerous rumors and stories circulating about how and why he dropped so low in the draft.  Some have said he has a bad shoulder and needs surgery.  Others say he has a knee that needs to be operated on, but he says he will be ready for rookie workouts starting this weekend.  The bottomline of it is that Eagles defensive coordinator Jonathan Gannon now has a linebacker, who can lead and excel in this defense.

With the Birds first sixth-round pick, they grabbed linebacker/defensive end Kyron Johnson, who is an edge rusher out of Kansas.  He is undersized at 6 feet tall and he weighs only two hundred and thirty pounds.  Amazingly, Johnson is a powerful pass rusher, who gets underneath blockers and overpowers them.  He is a versatile player, who has also played safety.

Johnson has tremendous leadership qualities.  He was the captain of the Kansas team for three years.  I could see them utilizing him on third downs because of his versatility.  He can cover a running back, tight end or rush the passer.  Gannon could use Johnson on their five men front defensive line looks.  He will likely be lined up outside and be coming off the corner, rushing the passer or covering a back or tight end.

Later in the sixth-round, the Eagles drafted SMU tight end Grant Calcaterra, who is an outstanding pass catcher and excellent pass route runner.  He’s a tremendous receiver as a tight end but he’s not much of a blocker.  Calcaterra is a bit undersized, but he’s the kind of guy who can get open.   I could see the Birds using him on two-tight end sets.   The young man has got a great feel for the passing game.

I would give the Birds an A for their draft picks and the trades that they made.

Hurts Is Eager To Prove He’s a Franchise QB